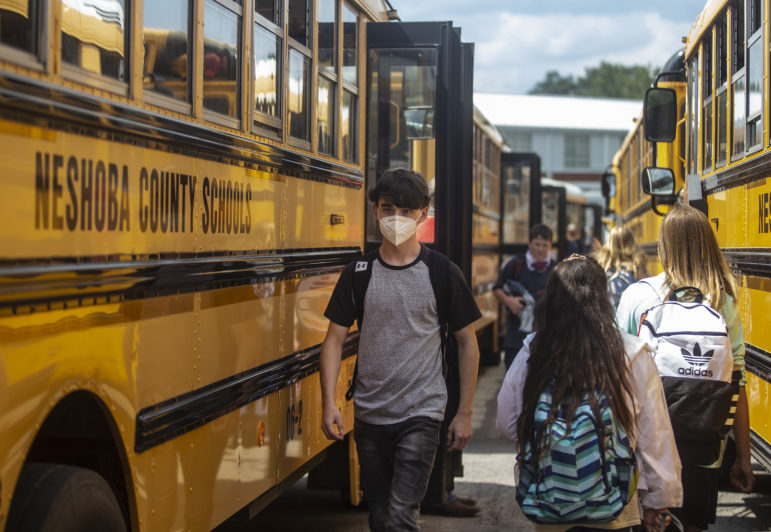 Neshoba County School District students get board school buses after the district’s first day of school on Wednesday, August 5, 2020.

The State Board of Education voted on Thursday to give an optional 10-day waiver to school districts that have either chosen or were ordered to delay their start dates.

Under state law, districts must complete 180 days of school by June 30 each year, which is why school usually begins in August in Mississippi. This waiver will allow affected school districts to only have to complete 170 days.

On Tuesday, Gov. Tate Reeves issued a mandate ordering school districts in eight counties considered hot spots for the coronavirus: Bolivar, Coahoma, Forrest, George, Hinds, Panola, Sunflower and Washington, to push the start of school back until August 17 for students in 7th-12th grades. The order affects 21 school districts, or about seven percent of students.

“This is not requiring 170 days. They [school districts] can do 190 days if they want. But if they need 10 days to work with because of the delay, that’s what I want to bring up,” said Jason Dean, Chair of the State Board of Education.

Dean said that this option is only available to school districts that either affected by the governor’s executive order, or who had to delay their published start dates. Schools that started this week or that plan on starting the next week are not eligible for the waiver.

He also said that he foresees this waiver affecting teacher pay, administrator pay and hourly employees, but that will be addressed at the board’s August 27 meeting.

Most school districts are opening this month — two opened in July and 10 plan to open in September.

Though many districts opened this week or plan to later this month, several groups, including the Mississippi Association of Educators, Mississippi State Medical Association and the Mississippi Chapter of the American Academy of Pediatrics have each advocated for a delayed start until at least Sept. 1.

State Board of Education allows shortened school year for some districts