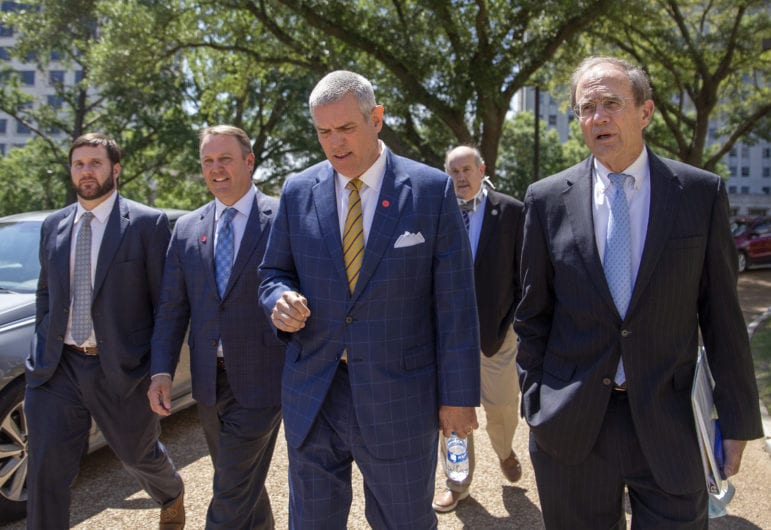 After lawmakers failed on Monday to whip enough votes to change the state flag, the Legislature’s two presiding officers — Speaker Philip Gunn in the House and Lt. Gov. Delbert Hosemann in the Senate — opted to take a different approach Tuesday morning: organize a meeting on the issue with many of the state’s religious leaders.

Soon after the meeting, the influential Mississippi Baptist Convention came out in support of changing the flag, as did Ligon Duncan III, chancellor of the Reformed Theological Seminary in Jackson.

Two other statewide elected officials — Insurance Commissioner Mike Chaney and Attorney General Lynn Fitch — also attended the meeting. Chaney said it was productive to have a discussion on such a divisive issue as the flag.

“It was basically a discussion that the lieutenant governor and speaker put together with the religious community,” Chaney said. “It was good.”

No other statewide officials attended the meeting, though they were invited.

As pressure intensifies from the state’s top business leaders, collegiate athletic associations and others to change the flag, lawmakers continue working behind closed doors to garner the votes in the Legislature to change the banner.

As those efforts have fallen short thus far this week, and with time running out to take up the issue during the current session, Hosemann and Gunn opted to try to include input from the religious community. Neither Hosemann nor Gunn commented on the meeting of religious leaders on Tuesday.

Rep. Scott Bounds, R-Philadelphia, said traditionally the Baptists “have had influence on legislation. It is hard to say if they will on this.”

The 500,000-member strong Baptist Convention has had influence on various social issues, such as restricting abortions, but has had less influence in recent years in other areas. Over the objections of Baptist leaders, the Legislature has enacted a lottery, expanded casino gambling and relaxed liquor laws in the state.

Sen. Daniel Sparks, R-Belmont, said, he did not know if the Baptist support for changing the flag would have an impact.

“Until we see what the proposal is, it is hard to say what will move the needle,” Sparks said. “But I cannot vote for anything other than an election.”

Sparks said he made a commitment when campaigning last year that he would only support a vote of the people if there were efforts to change the flag.

Sen. Joel Carter, R-Gulfport, said thus far he does not believe the position taken by the powerful Baptist group has changed many minds in the Senate.

But Carter said many members are saying there should be no vote in the current national environment of protests spurred by recent protests leading to the removal of many Confederate emblems and statutes.

He said the state should have an honest discussion of the issue and “not a knee jerk reaction.”

Lawmakers plan to wrap up the 2020 legislative session on Friday.