As protests against police brutality and discriminatory policing practices unfold across the country, organizers in Mississippi this week are following suit.

These events come in response to the deaths of George Floyd, Breonna Taylor, Ahmaud Arbery and countless other black people who have been killed by police or vigilantes this year.

Community organizers across the state in Clarksdale, Cleveland, Tupelo, Meridian, Jackson and Gulfport, among other towns and cities, are also scheduling rallies and protests against police brutality, racism, and discrimination and inequity in the criminal justice system.

“A lot of people are questioning what are we protesting? Why are we so angry?” said Arekia Bennett, longtime community organizer and a mentor to students planning a protest in Jackson on Saturday. “But the truth of the matter is black folks in Mississippi have been fighting this fight for a very long time, and black people, particularly in Jackson, are fed the fuck up.”

Protests are occurring across the state this week, with several specifically regarding Attorney General Lynn Fitch’s decision to drop charges against Canyon Boykin, a white police officer who shot and killed Ricky Ball, a black man, during a traffic stop in Columbus in October 2015.

“It could be anybody, plain and simple,” said Calvert White, 20, a co-organizer of the Jackson protest and rising junior at Alcorn State University. “Our thing is to get people aware and get people to understand that lynchings aren’t just something that happened during the civil rights era, it’s still happening.” 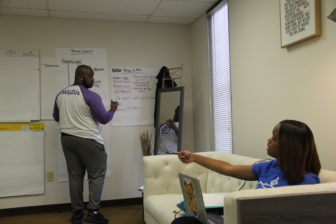 Together with a group of about 15 young people, co-organizers White, Maisie Brown, and Taylor Turnage are planning a Black Lives Matter Mississippi protest in downtown Jackson. The event will start at the Governor’s Mansion on Saturday at 3 p.m. Participants will begin at the mansion and move a few blocks north to the Mississippi State Capitol.

“We’re hoping to be a buffer between civilians and the powers that be, especially (Gov.) Tate Reeves,” White said. “Because there is such an elaborate process just to get to him, and so we have to make ourselves seen. We have to make our own space.”

Organizers hope Saturday’s protest is only the beginning; that it will spur action and involvement from state leaders and community members alike. They noted that while the governor has condemned Floyd’s killing, they want his actions to match up with his words.

“I want (the governor) to start taking care of people who look like me,” said Brown, 18, a recent graduate of Murrah High School in Jackson. “That’s what I want Tate Reeves to do. Don’t talk to me, do for me.”

The group put out a call to action asking people to donate to the Black Lives Matter bail fund, hold their community leaders accountable, vote, and educate themselves. Separately, the group has a list of demands that include removing Confederate symbols and memorabilia, reopening the Ricky Ball case, decreasing the state’s prison population, and centering public health in decisions involving schools returning in the fall because of the coronavirus. The full list can be viewed here.

Organizers Yasmine Malone and Tyler Yarbrough, both students at the University of Mississippi who are planning a Saturday protest in Clarksdale, expressed these same sentiments, noting “power” as the reason for this fight. 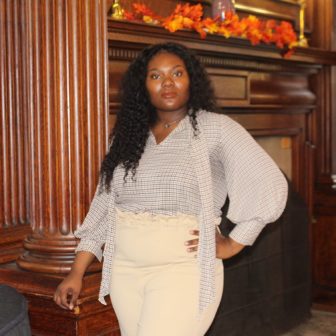 Clarksdale native, Yasmine Malone, majoring in Political Science with a minor in Journalism and Public Policy Leadership University of Mississippi

“My vision of it is less of a protest and more of a rally because I think protest has more of a reactionary stance whereas we want something to have a lasting impact,” Malone said.

While honoring the lives of black people who were killed by police officers, the co-organizers wanted to fold in other issues affecting the Mississippi Delta. Both Clarksdale natives, Yarbrough and Malone saw how inequitable systems of poverty, healthcare, education, criminal justice, food access, and workforce and economic development impacted their family, friends, and the entire region. These issues influenced the students’ college decision to enroll at the University of Mississippi and pursue advocacy work on behalf of their communities. 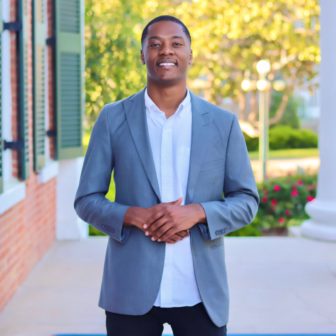 “We want to use the space to call those systems out, call those issues out, and empower the communities so that they have the ability to one, re-imagine these systems, two, acknowledge they are systems, and three, come together and unify in the times we’re in,” Yarbrough said.

The rally, planned for 5 p.m. on Saturday in downtown Clarksdale, will include a line-up of speakers, a voter registration and 2020 Census drive, and a march, mimicking the initiatives civil rights activists like Vera Mae Pigee and Aaron E. Henry implemented in the 1950s and 60s.

“I think I’m excited for after the moment where we have people to come together in a more intimate space and a more diverse space where we talk about our community problems and to really arm the people,” Malone said. “If this is the opportunity to arm the people with knowledge, the next time we meet is a chance to arm people with action.” 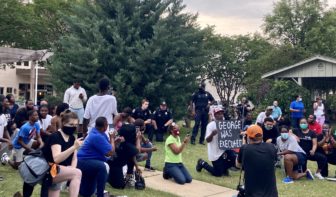 Police officers take a knee with protestors in Cleveland, Mississippi.

In Cleveland, a peaceful march took place Wednesday, June 3, after Bishop Carey Sparks organized an evening that originally was just meant to be a prayer vigil. At least 200 people gathered to listen to religious leaders, college students and a county supervisor talk about racial inequality and civil rights.

“I wanted Cleveland to try to be a model,” Sparks said. “I wanted to put us on display in a positive light of where you (hold a protest) and make it look good and not loot.”

Like the rest of the nation, Sparks was compelled to organize the demonstration because of Floyd’s death, but also because of long-held racist policies and his own experiences of being discriminated against.

Overall, he said he felt the evening was loving and peaceful.

Mississippi has a long history of demonstrations and organized protest, but civil rights veteran Leslie-Burl McLemore sees this time as unique. McLemore said he sees a number of parallels between what happened during the 1960s when he was marching and organizing as an activist and the present day. 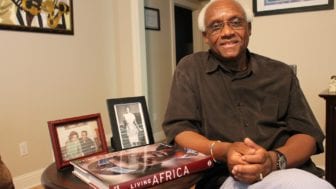 Dr. Leslie B. McLemore, Veteran of the Mississippi Civil Rights Movement at his home in Walls, Miss.

“There are fundamental differences, too, of course,” McLemore said. “The young people in the street today, they are much more integrated from the standpoint that you have greater participation by non-black people in the movement in the marching.”

He continued: “And quite frankly, we’re at a different moment in world history. Because in the 60s, we did have nationwide and worldwide impact, but nothing to the tune of the impact that the movement is having now, that it’s had over the last two weeks. I think it’s a new phenomenon.”

McLemore said that he’s struck by the degree of racial sensitivity that he’s seeing right now, using the public outcry over Drew Brees’ recent condemnation of athletes kneeling during the anthem as an example.

“My basic point is this: We are experiencing a moment in world history that we have not experienced before. These demonstrations, these movements have been going on for days and I have no idea when the marches are going to stop. I just hope that the marching continues for the next number of days,” McLemore said.

‘Fed the f— up’: Why young activists are organizing protests across Mississippi