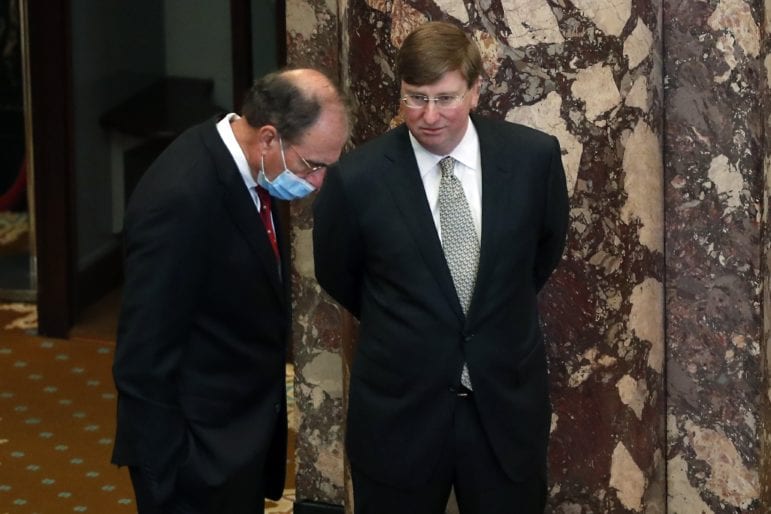 Lt. Gov. Delbert Hosemann, left, confers with an unmasked Gov. Tate Reeves in Senate Chambers at the Capitol in Jackson, Miss., Tuesday, May 26, 2020.

Lt. Gov. Delbert Hosemann recently warned members of the Mississippi Senate to wear their masks or risk being photographed or videotaped by media outlets without one.

Whether a politician eschewing the wearing of a mask would be harmful to a Mississippi politician is debatable. But a day before Hosemann warned members of the possibility of being photographed without a mask, Gov. Tate Reeves went maskless while visiting the Senate chamber – his old stomping grounds – where he presided for eight years as lieutenant governor. Not only was Reeves not wearing a mask, but he also appeared at times to be challenging social distancing guidelines as he carried on conversations with members in the ornate Senate chamber.

And yes, there was a photograph of the event taken by Associated Press photojournalist Rogelio Solis of Hosemann, sporting a mask, and Reeves, sans a mask, in deep conversation.

The scene was a bit surprising since the Republican Reeves often has gone out of his way to agree with state Health Officer Thomas Dobbs about the importance of wearing masks in their near daily news conferences conducted to provide updates on the COVID-19 pandemic.

And the argument often is made that politicians asking their constituents to do something that could be a sacrifice – such as social distancing or wearing a mask – should lead by example. Reeves was not that day.

When asked about his maskless foray into the Mississippi Senate, Reeves to his credit did what most modern-day politicians have become reluctant to do – essentially to say he made a mistake. Now Reeves did not utter the words “I made a mistake,” but for a politician it was fairly close.

“What I would tell you is that when I have gone out in public, which has been rare in the last three months, I have tried to wear a mask..,” he said. “I probably should have had on a mask. It is not mandated. It is not as if it is a mandate, but it certainly is more responsible.

“Those of us in the public sector, in government, we have to take some risks, but no doubt I usually have a mask with me and I probably should have had it on (while) on the floor.”

The issue of whether to wear a mask has become politicized in recent weeks with President Donald Trump, who based on polling is more popular in Mississippi than in many other states, espousing the virtues of wearing a mask at times and in other instances belittling people who wear them. Reeves, who it could be argued is a Trump acolyte, has never said anything negative about the wearing of masks – at least not in public.

At the Mississippi Capitol, where extraordinary measures have been undertaken to ensure the building is safe while the Legislature is in session during the pandemic, some politicians and lobbyists wear masks while others do not. Most at least try to practice social distancing guidelines but many often do not. And often the people who don’t social distance and the ones who do not wear a mask are one in the same.

Of course, social distancing and wearing a mask might feel counter-productive to some in a building where communication skills and relationship building are at a premium for passing legislation. Because of all the close contact, the Capitol seems like a prime location for the coronavirus to thrive. That is perhaps the reason it is just as important to wear a mask at the Capitol as say, at the grocery store. After all, most people go the grocery store, buy their supplies and leave. People linger in the Capitol, get in each other’s space to make deals and share gossip.

Against that backdrop Reeves’ action was a bit surprising since he had been a champion of mask wearing and seemed to be a sincere supporter of Dobbs’ plea to wear a mask. At an earlier news conference, he touted his “Mississippi strong” mask that he received from a constituent.

“If we do these simple things, we will be in such a better position than if we are stubborn for no good reason,” Dobbs said of mask wearing. He said a cloth mask can block up to 90 percent of infectious particles from a person who is contagious.

At that point Reeves chimed in to add that the Mississippi Emergency Management Agency and the National Guard had delivered 2.25 million  masks to the state’s 82 counties.

“It is such a herculean effort,” he said, adding that masks were available in the communities for people who need them.

The next day Reeves returned to the Senate – wearing a mask.

Reeves concedes he should have worn mask during Senate visit, but he wasn’t only one maskless