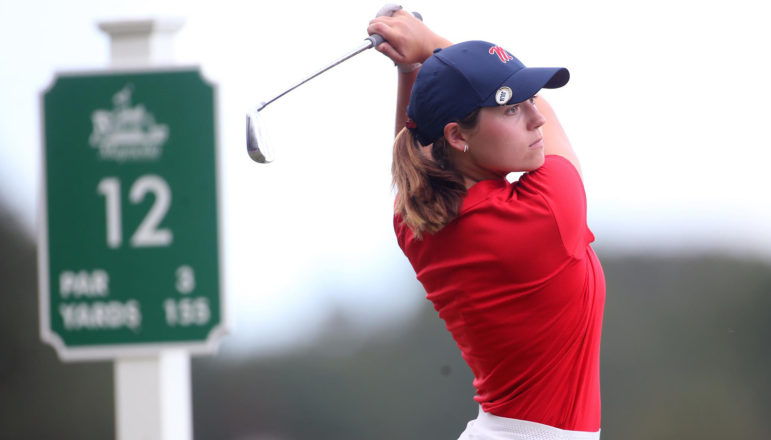 Julia Johnson’s swing was nearly flawless during her record round of 61 at San Jose Del Cabo, Mexico.

But nothing in his golfing life prepared Byrd for what he saw this past weekend in Mexico.

That’s when Julia Johnson, a petite, cerebral, 20-year-old Ole Miss junior golfer from St. Gabriel, Louisiana, shot an 11-under par 61 in the final round to win the Battle of the Beach Tournament at San Jose Del Cabo, hard by the Pacific Ocean on the Baja California peninsula.

Said Byrd, “I’ve never seen anything like it. It was the best round of golf I’ve ever seen and I’m not sure anything else is even close. It was a 61 that could have been a 58. It was unbelievable.”

“Shocking,” was the word Johnson, herself, used to describe the best round of her life. “I mean, you just don’t plan to go out and shoot 61.”

Johnson, who won the Louisiana state high school championship four straight years, once shot 63 in a high school tournament. But that, she says, was on an easy, short golf course.

The 61 in Mexico was not. Club Campestre San Jose is a Jack Nicklaus-designed, 6,200-yard course, littered with bunkers. Wind off the ocean gusted up to 30 mph during the record round.

“It was the hardest course we played all this fall season,” said Byrd. “Sixty-seven would have been a great round on that course in those conditions. Put it this way, nobody was shooting 61 in their dreams on that course that day.” 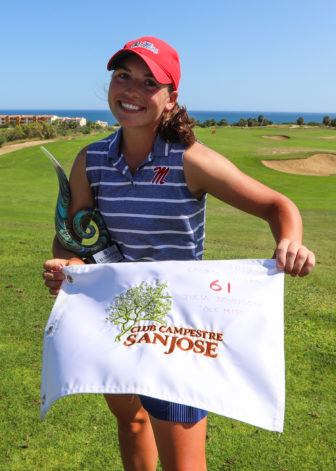 Johnson led 13th ranked Ole Miss to its third team championship of the fall. The Rebels finished seven shots ahead of LSU, the school located just a few miles from where Johnson grew up and the school to which she was once committed.

The Ole Miss final round team score of 11-under-par 277 was the third lowest in team history and this will lend some perspective to Johnson’s 61. She was 11 under par herself. The rest of the team was even par.

Funny story, Byrd missed Johnson’s first three holes, saw the last 15. When he joined Johnson on the fourth tee he naturally asked how it was going. She answered that she had started 3-2-3.

“Hang around this hole and let’s see how it goes,” Johnson replied, and she promptly birdied again.

And so he did. And the birdies kept on coming. All totaled, she made nine birdies, an eagle and eight pars.

Yes, 59 was a real possibility. She went to the 17th hole needing birdies on the last two holes to shoot 59. She made solid pars instead.

“But I’m telling you she could have shot 58,” Byrd said. “She missed several putts under 10 feet.”

And this will tell you more about Johnson and her passion for excellence. After a couple days off she was back in the Ole Miss coaches’ office on Wednesday, asking, “What can I do to get better? What did you see that I can improve.”

Byrd mentioned that her wedge game from 90 to 110 yards was slightly off, even in the final round. So out to the practice tee she went.

This will tell you more about Johnson. She is an honors student who will graduate next spring in three years with a degree in political science. She plans to pursue a Master of Business Administration (MBA) during her senior year of eligibility.

The LPGA Tour was never a part of her plan until about two weeks before the Mexico trip.

“Honestly, my game has improved so much, my ball-striking has gotten so much better that I feel like I owe to myself and everyone who has supported me to give it a try,” she said.

Her world and U.S. ranking has soared this fall to a point where she will qualify for the Augusta National Women’s Amateur next April. She has her sights set on an NCAA championship later next spring, hoping to match her friend Braden Thornberry‘s NCAA men’s championship won for Ole Miss in 2017.

“My goals have changed a lot this fall,” Johnson said.

And much of that happened before she shot 61.

Nobody was shooting 61 ‘in their dreams,’ but Julia Johnson did it in real life in Mexico