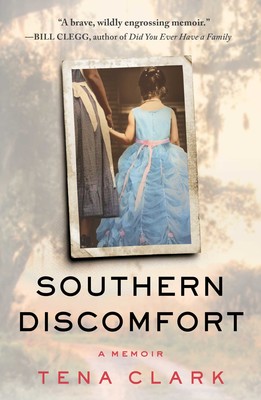 On Tena Clark’s 10th birthday, an hour before friends showed up to the sleepover she’d been planning for weeks, her mother walked out on her family for the last time. The scene, which opens her memoir, Southern Discomfort, is drawn in searing detail, from the sound of her mother screaming at her father, to the broken jewelry box Clark finds in their driveway, to her mother’s final “Aloha, baby,” as she drunkenly backs out of the driveway.

The scene anchors Clark’s memoir, but it’s far from the book’s only painful moment. Southern Discomfort, which details Clark’s troubled and privileged upbringing in Waynesboro, Mississippi, during the civil rights era, is aptly named. Clark, who later would come out as a lesbian and have a successful career as a songwriter and music producer, never fits into conservative small-town Mississippi or anyone’s ideas of what a Southern girl should be. And then their are her parents.

Her father, Lamar Clark, a narcissist and unapologetic philanderer, is Wayne County’s richest man, a status he achieved through scrappiness and potentially extra-legal means. Her mother Vivian is a 6-foot-tall bon vivant who towers six inches over her husband. Clark describes her as brilliant with musical ambitions of her own. But by the time Clark, the child who “was supposed to be the ‘save the marriage baby’ that didn’t save the marriage,” is a child, Vivian is also a terrible alcoholic. “She wasn’t the town’s only drunk,” Clark writes wryly. “But she was one of its most visible.”

Amazingly, Clark’s writing is its strongest and most lyrical when talking about her parents, such as the scene when her father coerces her mother into his car in a futile attempt to argue her into returning to their marriage. “Daddy lit two cigarettes and gave her one, which she accepted, taking a long drag and letting the smoke out slowly. The car filled with their smoke. The concept of secondhand smoke being potentially lethal, especially to children in the car, was still decades away. Sitting in the backseat, I was simply invisible to them. They loved me, but I was invisible.”

Clark, now in her mid-60s, renders her parents with admirable distance, painting them not just as flamboyant characters but as real, nuanced people. One of the book’s most colorful and comical scenes describes her mother’s failed attempt to kill her father, whom she’d heard was out joyriding with another woman. Clark understands her mother’s anger. But she also understands the absurdity of the moment. “When she drove, Mama drank whiskey as neat as anyone I ever saw: straight out of the bottle. She steered the car with her left hand, passing the bottle and holding her cigarette with her right.” These are mythic Southern characters, the kind Hollywood loves to make movies about.

Clark is less successful reckoning with race. On the one hand, she unflinchingly describes the racism that infected Waynesboro when she was growing up there. The Ku Klux Klan makes several appearances. Her father is an unabashed segregationist. Her mother, in a drunk rage, once scrubbed her hand with a Brillo pad after catching her playing with a black child. And Clark doesn’t try to explain away or compensate for these flaws in her parents’ characters.

But when it’s time to point the lens at herself, Clark doesn’t seem to understand her own nuanced role, as someone theoretically opposed to racism but still complicit in perpetuating it.

In what is easily the book’s most painful scene, Clark describes how she, inspired by Thurgood Marshall’s appointment to the U.S. Supreme Court, decided to integrate a local restaurant where her family’s maid Virgie had always been forced to eat on the steps. In the book, she drags Virgie to lunch with her, despite Virgie’s quiet pleas to stop and give up the idea. Clark acknowledges the attempt is a disaster—Virgie, the woman who essentially raised her in her parents’ absence, is splashed with food and frozen out. What she doesn’t acknowledge is that the same white supremacy she’s condemning is also what gave her the power to force this woman, her family’s employee, into this plan against her will.

Earlier in the book, describing the predominantly African American town where Virgie lived, Clark had written, “But as poor as their neighborhood looked to me through the windows of Daddy’s Cadillac, its residents, and those of a lot of black towns across the South, felt lucky to have a roof over their heads, no matter if it had a few holes in it.” This is a gross generalization about entire black communities, and it’s one that is layered, even if unintentionally so, in the same racist logic that segregationists used to justify Jim Crow, that blacks would be grateful to have something of their own, even if it was inferior to what whites had.

These moments are not frequent in the book, but they’re jarring, much like her decision to quote dialogue from Virgie and other black people in her book, using antiquated African American vernacular. And although the book is called Southern Discomfort, it’s unlikely this is the kind of discomfort she wants her readers to feel.

Read our staff picks, which we’ll update throughout the week.