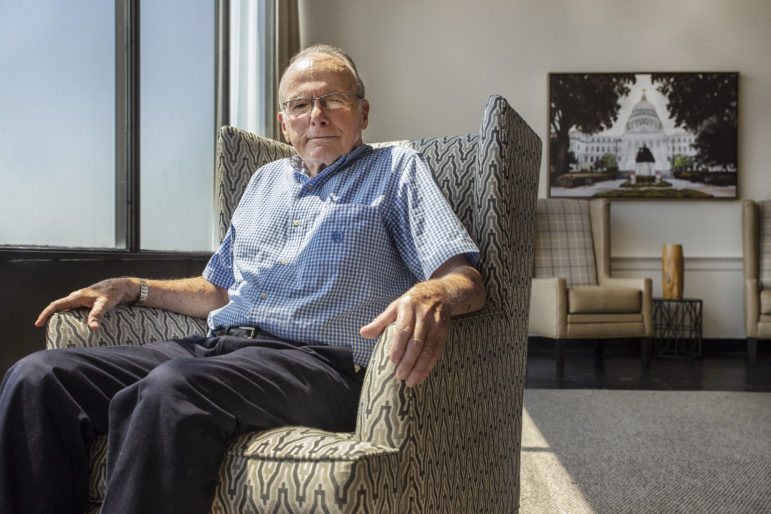 Irl Dean Rhodes coordinates a group who have met for breakfast in Rankin County for 16 years and all Republican statewide candidates in this year’s election have attended.

If you’re a Republican running for statewide office, you’d better stop by the monthly breakfast that Irl Dean Rhodes hosts in Rankin County.

Rhodes, 82, coordinates a group of local power brokers who have met for breakfast and politics once a month for 16 years in the county with the most Republican voters of any county in Mississippi.

This year, all 12 GOP candidates running in contested primaries for statewide office have attended Rhodes’ breakfast at McClain Lodge in Brandon. Some of them have attended more than once.

The candidates know what’s at stake when they walk through the doors. Rhodes and the group of more than 100 regular attendees don’t publicly endorse candidates, but their whispers of support for particular candidates echo across the crucial Republican hotbed.

“We’ve never endorsed a candidate and never will,” Rhodes told Mississippi Today with a smile.

Lt. Gov. Tate Reeves, who was raised and currently lives in Rankin County, understands the importance of attending the monthly breakfast hosted by Rhodes. Reeves, the second term lieutenant governor and the longtime presumed front-runner in the 2019 governor’s race, has attended two events that Rhodes has hosted this year.

Just two days after he formally announced his candidacy for governor, Reeves stopped by to do some politicking before the breakfast group that has become affectionally known as the “Rankin County Mafia.”

“One failed candidate called them the Rankin County Mafia last year. I just call them friends!!!” Reeves tweeted on Jan. 5. “One of my first stops as a candidate was at our monthly breakfast with Sheriff Bailey, Senator Kirby, Irl Dean Rhodes and so many more already on #teamtate!!”

But Rhodes, who said he has not publicly endorsed Reeves or any other candidate, says Rankin County residents aren’t overly bullish about the chances of the hometown candidate and Reeves won’t win if it goes to a runoff.

“I think Tate’s gonna win Rankin County by an extremely slim majority, but nothing like what we saw last year with (U.S. congressman and Rankin County native) Michael Guest, who got 82 percent here,” Rhodes said.

Rhodes highlighted the complaints he’s heard about Reeves from people across Rankin County. Road builders, public school educators and health care industry workers are the three groups who have been most vocally opposed to voting for Reeves, Rhodes said.

Rhodes said that forecasting Republican primaries for governor has never been too difficult, adding that this year “is a tough one.”

“I had a fella last week tell me, ‘Anybody but Tate.’ That saying’s starting to catch on,” Rhodes said. “I really just think this election is gonna be a lot closer than people think.”

Rhodes has been called the “kingpin” of the Rankin County Mafia, a tongue-in-cheek reference to his continued involvement in county politics and his numerous run-ins with the law in the 1980s. When he was serving as Rankin County chancery clerk, he was said to have “pocketed more money from his fee-paid job than any county official in Mississippi history,” longtime Mississippi columnist Bill Minor wrote in 2001.

After pleading guilty to federal tax evasion in 1981, Rhodes became the face of local government corruption in Mississippi after then-state Auditor Ray Mabus targeted dozens of local officials across the state. Rhodes, on the same day all five Rankin County supervisors resigned in 1988, was indicted on 12 counts of embezzlement. He was never convicted in the Rankin County courts.

Three years later when Mabus ran for governor, Rhodes threw his support behind Republican gubernatorial candidate Kirk Fordice, who defeated Mabus with the help of a large number of votes in Rankin County.

After 62 years of close involvement in Rankin County politics, Rhodes knows the Republican hotbed better than anyone, which means he knows Reeves well.

Rhodes says a slim majority in his home county could spell trouble for Reeves, who’s running for the Republican nomination against Robert Foster, a first-term state representative from DeSoto County, and Bill Waller Jr., former chief justice of the Mississippi Supreme Court. The winner of the GOP primary will likely face Democratic Attorney General Jim Hood in the November general election.

Reeves and his allies have lowered expectations in recent days for the Aug. 6 primary, publicly discussing the possibility of an Aug. 27 runoff if Reeves cannot earn more than 50 percent of the vote.

Waller has high name identification in the Jackson metro area, including Rankin County, and has consistently polled in second place of the three candidates.

Foster claims he’s gained momentum in recent weeks after what has been called a strong performance July 23 in the only GOP debate and national attention garnered after he refused access to Mississippi Today reporter Larrison Campbell because she is a woman.

Political experts believe that a late run from Foster would pull votes from Reeves, opening the door wider for Waller to make a runoff. When asked to forecast what he thinks would happen in a runoff between Reeves and Waller, Rhodes picked against the candidate from Rankin County.

“If it goes to a runoff, I think Waller beats Tate,” Rhodes said. “They say the mother’s milk of politics is money. I think you’ll see a lot of money changing hands and helping Waller in a runoff. I’d go ahead and give the crown to Waller. So many folks don’t like Tate.”

Rankin County ‘kingmaker’: Hometown boy Tate Reeves not a sure thing in runoff with Bill Waller