In a letter to the Department of Justice’s Civil Rights Division last week, Families Against Mandatory Minimums cited evidence of what they called unsafe conditions, including violence and the presence of weapons, as well as understaffing at the state’s second-largest prison. These claims were based on letters and photographs prisoners sent the organization. 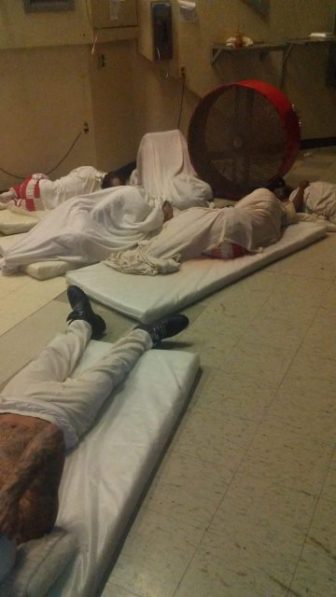 Kelvin Sanders, a former inmate at Parchman Prison in Sunflower County, said this photo shows men sleeping on the floor of the prison to avoid water dripping down on their beds.

“We’ve heard about Parchman over the years,” FAMM President Kevin Ring said in an interview. “But it’s only been in the last few weeks that we started to get more clips, videos and messages from people inside.”

“To see inside a cell, the water damage, the black mold, the flooding — it just seems like there’s something going on here,” Ring said.

Ring compared the conditions of the Sunflower County facility, which houses over 3,000 prisoners from across the state, to those of Alabama prisons deemed unconstitutional in a DOJ report last month.

FAMM also decried the effect of frequent lockdowns, in which many routine prison functions such as commissary and in-person visits are cancelled, on prisoners’ family members.

The Mississippi Department of Corrections did not immediately respond to a request for comment.

The call for action follows a sudden influx of photographs and videos purportedly leaked from Parchman and South Mississippi Correctional Institution in Leakesville that circulated across social media in the last week. 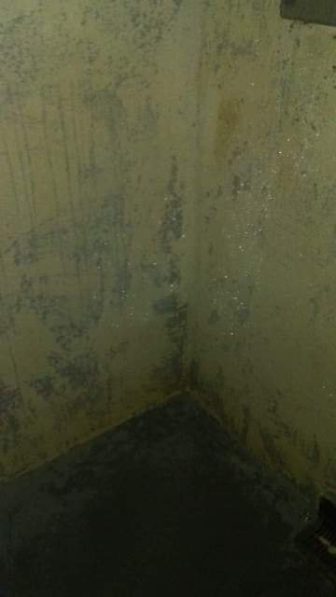 Those images depict showers with peeling walls and stained floors; sparse food trays; emaciated men slumped over their bunks and lying on mattresses on the floor.

Two separate people, who identified themselves as a former prisoner and the fiancee of a current inmate, came forward as the sources of the photographs and videos, which were first posted to a Facebook group advocating for prison reform earlier this month.

Many of the photographs depict Parchman, according to a man named Kelvin Sanders, who posted dozens of photos on Facebook. He also shared videos depicting two men fighting among bunks with Mississippi Today.

The Mississippi Department of Corrections could substantiate neither the photos nor the video, according to a spokesperson.

“It’s hard to forget,” said Sanders of his time at Parchman. He provided a photograph of an MDOC inmate identification card issued in 2017 bearing his name. Sanders managed to hold onto an SD card containing the photos he took with a contraband cell phone from 2016 through the completion his sentence in January of this year, he said. 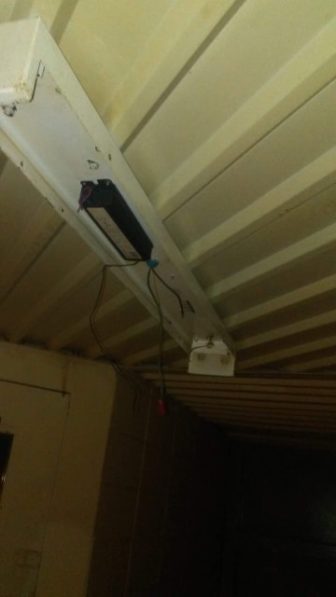 Former Parchman prisoner Kelvin Sanders says he has taken many photos of living conditions at the prison on a contraband cell phone. He later took the phone’s memory card with him, he said, and posted the images, including this one which shows exposed wiring, to Facebook.

Sanders said in an interview that after he posted the photos online, he received a call from an unlisted number. The caller identified themselves as an MDOC employee and threatened Sanders with retaliation, though Sanders said he was not afraid because he completed his sentence in January and is not under community supervision. He has since moved to out of Mississippi.

An agency spokesperson confirmed that a man by Sanders’s name was in MDOC custody, including at Parchman, on and off between March 1997 and January 2019, but could not verify Sanders’s allegation about any threats made.

Lakeshia Payton, whose fiance is currently at SMCI, also made public several photos and video which she said depicted South Mississippi Correctional Institution in Greene County this month. Payton said she cried upon receiving the media from someone else at the facility.

The images, which Payton also provided to Mississippi Today, include videos that pan over a shower and show what appears to be mold on the walls.

“I couldn’t even look at that,” she said of the videos. “I had those videos for months.” Fed up with a months-long lockdown at SMCI, she finally put them online, Payton said.

The photos and video were publicized by Carol Leonard, a Tennessee-based advocate for prisoners and their families, through her social media channels.

“The guys take a huge risk in leaking this stuff,” Leonard said in an interview.

Penalties for possessing a cell phone or other contraband in a correctional facility are stiff. A conviction can lead to a prison sentence of three to 15 years and a fine of up to $25,000.

For advocates such as Leonard, the photographs and video confirm the living and social conditions many on the outside have long heard about, from black mold in dirty showers to a lack of programming available for prisoners.

Earlier this year, over 2,000 photos depicting scenes of violence and gore in Alabama’s St. Clair Correctional Facility, one of the prisons cited in the DOJ report, were leaked to news media.

Mississippi itself is currently battling a lawsuit over conditions inside the privately run East Mississippi Correctional Facility near Meridian.