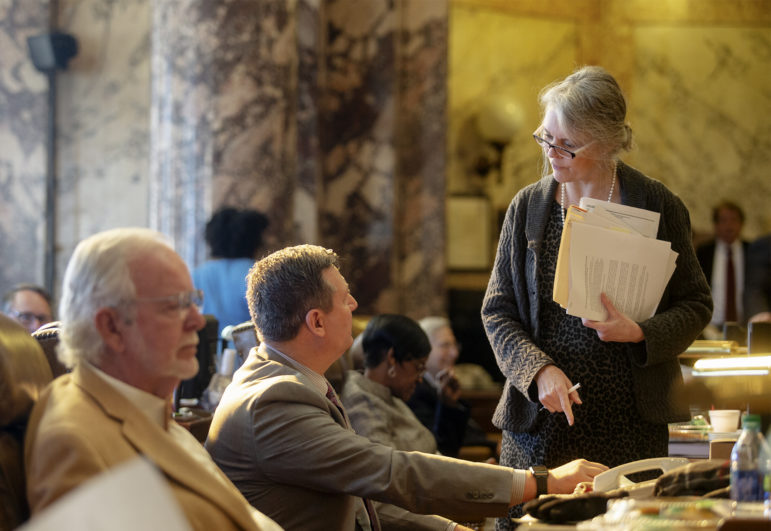 Lawmakers prepare for the second day of the 2019 legislative session Wednesday, January 9, 2019.

At one point Thursday on the next to last day of the 2019 session, Speaker Philip Gunn, R-Clinton, sat in his state Capitol office surrounded by reporters – educating them on the fact that the Legislature does not have any money of its own.

Hours later, that same night on the House floor, he informed many of the same media members that it was all right for the Senate leadership to insert $2 million in funds for private schools into an appropriations bill related to a completely different subject because “it was the Senate’s money.”

The juxtaposition on those comments was not lost on those listening.

What Gunn was referring to is that the Legislature had $125 million of non-recurring money (from the taxpayers) thanks to revenue growth during the current fiscal year, and there had been agreement to spend a portion of it – about $27 million – on various projects throughout the state, such as $500,000 for repairs at Tishomingo State Park, $50,000 to repair an animal shelter in DeSoto County and $650,000 for a road expansion in George County. It was a popular program to allow legislators to “bring home the bacon” in an election year.

There were about 70 of such projects inserted into the appropriations bill for the Department of Finance and Administration. The DFA is the agency that essentially serves as the state’s fiscal agent.

Lt. Gov. Tate Reeves, who presides over the Senate, wanted one of those projects to be an additional $2 million to a program that allocates public funds for special needs students to pursue private education options.

Reeves said he met with at least the speaker from the House to discuss the plan.

In the Senate, Appropriations Chair Buck Clarke, R-Hollandale; Pro Tem Gray Tollison, R-Oxford; and Finance Chair Joey Fillingane, R-Sumrall; knew, but it is not clear anyone else was in on the plan.

Some would argue legislators should have read the bill before voting.

The only problem is that the agreement on the DFA appropriations bill was filed at 5 p.m. Thursday and was taken up in the Senate at 5:19 p.m. – the last of more than 100 budget bills dealt with by legislators in the final three days of the session. It was passed at 5:20.

As it was being passed, a list of the about 70 projects was handed out. Perhaps, members should have seen the $2 million for the Education Savings Account, but they were looking to find projects in their districts, they said, not thinking about money for a program that would normally be in the budget for the Department of Education.

On the House side, a similar scenario occurred, only no list was handed out. By the time the House took up the agreement, it had been placed online on the legislative web page. But again, members had minutes to read a 21-page bill, and they were looking for their project, not education money.

And it is not clear if anyone other than the speaker knew the project was in the bill. Rep. Bill Denny, R-Jackson, who explained the bill to members, said he did not know.

House Appropriations Chair John Read, R-Gautier, said, “If I had known I would have told them. I have egg on my face.”

Hours before the vote House Education Chair Richard Bennett, R-Long Beach, had assured members he would not agree to additional funds to be added to the already $3 million voucher program that a legislative watchdog agency had criticized for its lack of accountability.

It is not known if the agreement to include money in the Finance and Administration budget bill for the program was reached before or after Bennett’s comments.