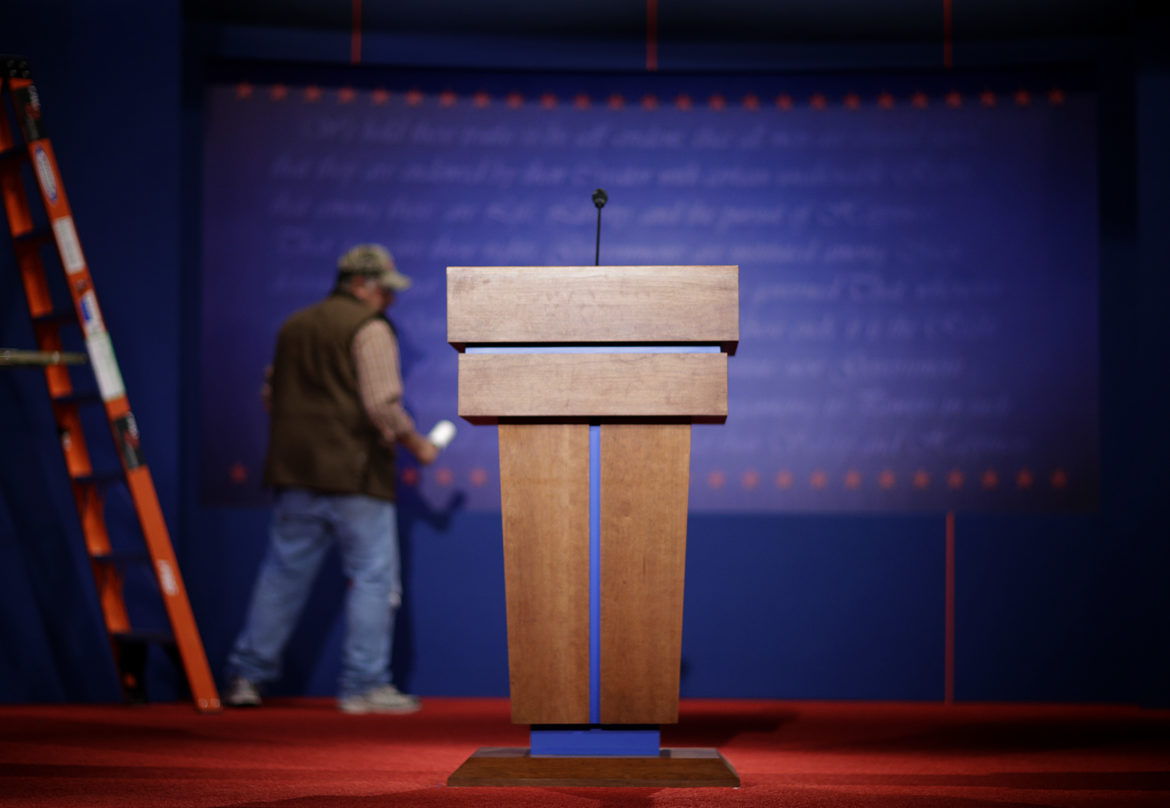 A podium stands on stage as a worker cleans lint off the background for a debate.

Recent comments by Republican interim U.S. Sen. Cindy Hyde-Smith appear to have intensified interest in her Nov. 27 runoff with Democrat Mike Espy and have placed added significance on a debate scheduled for a week before the election.

“It is a gift to Espy. We will have to see what he can make of it. Will it stir turnout in the African American community? ” asked Marty Wiseman, a political science instructor at Mississippi State University and former director of the school’s Stennis Institute of Government.

A video surfaced over the weekend of Hyde-Smith, speaking in Tupelo before the Nov. 6 first election, describing her fondness for one of her supporters by saying of one man, “if he invited me to a public hanging, I’d be on the front row.”

In Mississippi, with a dark past of lynchings of African Americans by white mobs, those comments were met with wide consternation.

Hyde-Smith downplayed the comments, saying “any attempt to turn this into a negative connotation is ridiculous.”

During the upcoming debate, sponsored by Farm Bureau and scheduled to air on NBC television stations throughout the state, Wiseman said panelists are likely to ask about the comments again and Hyde-Smith will be forced to expand on her statement.

Expanding on her original statement is something she would not do Monday during a news conference with Gov. Phil Bryant where she was endorsed by the National Right to Life organization. At the news conference she was asked about the comments several times but refused to expand on her original comments. Bryant, who appointed her to the Senate in April after long-time Sen. Thad Cochran resigned for health reasons, came to her defense, saying he knew “her heart” and that she did not mean any ill will with the comments.

“You would expect a U.S. senator could speak for herself and not depend on other people… It is definitely not a good look for her,” said Nathan Shrader, a political scientist at Millsaps College in Jackson.

The news conference performance was not surprising, Shrader said, saying that it had been emblematic of her campaign where she spoke little of policy but focused on the fact she was 100 percent in support of President Donald Trump.

Of the debate, Hyde-Smith said in a statement, “I am looking forward to participating in the debate hosted by Mississippi Farm Bureau on Nov. 20 to discuss the key issues and clear differences in this important runoff election. This election is not just about me. It’s about what voters believe in, their values and principles — and this debate will be a good way to highlight the differences between the candidates.”

Hyde-Smith has been the heavy favorite to win the special election. She led Espy slightly on Nov. 6 when there was record turnout for a midterm election in the state and where tea party favorite Chris McDaniel, a state senator from Ellisville, siphoned off a portion of the Republican vote.

It is not clear how voters will judge her comments in the unusual election where they will return to the polls on the Tuesday after Thanksgiving. But there does seem to be renewed interest in the election.

Hyde-Smith’s “public hanging” comments and her reaction at the news conference have been covered by national news outlets.

State Rep. John Hines, D-Greenville, a member of the Legislative Black Caucus, said he believes the comments will generate added excitement in the African American community to vote for Espy, who in 1986 became the first African American to represent Mississippi in the U.S. House in the modern era.

“I had 10 or 12 texts from people this morning asking who is she how did she get this position,” he said. “When people who normally just vote but don’t follow politics closely are talking about it, you know people are interested.”

Wiseman said normally there is a sizable dropoff in voter participation between the first election and a runoff. Wiseman said the Hyde-Smith comments could change that dynamic. The difficulty for Espy, he said, might be to walk a tight rope, trying to ensure an increased turnout in the African American community while not offending white voters who normally would vote for the Republican, but might be turned off by the Hyde-Smith comments.

Danny Blanton, a spokesperson for the Espy campaign, said interest in the election appears to be growing. Since the Hyde-Smith “public hanging” comments came to light the campaign’s Twitter followers has doubled and the number of Facebook followers has increased by 2,500.

Blanton said he did not have details on how much, if any, the campaign contributions have increased.