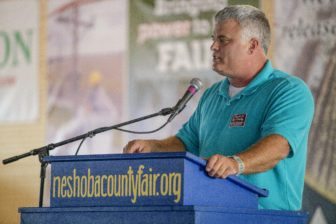 NESHOBA COUNTY FAIR – State Rep. Mike Evans of Preston, the Democratic nominee for the open 3rd Congressional District U.S. House post, said Wednesday if he is elected in November “the Republican Party’s mafia of Rankin County” will no longer run the district.

Evans, a long-shot in the heavily Republican leaning district, took a calculated risk at the political speakings at the Neshoba County Fair of trying to pit the rest of the district against highly populous Rankin County, which is a Jackson suburb.

The Republican nominee in the 3rd District race, Michael Guest of Rankin County, who spoke after Evans, did not respond to his charges but instead talked about the importance of the elections nationally as Republicans struggle to maintain their majority in the U.S. House. 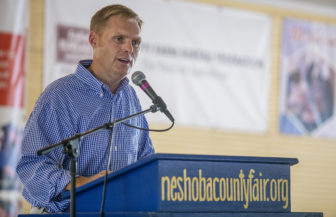 “When you think about this race, it is just not my name and my opponent’s name on the ballot. More importantly what is on the ballot in November is our conservative principles and our conservative values,” Guest said on an unusually mild summer day under the tin-roofed pavilion for the annual political speaking that attracts political observers and media from throughout the state.

He cited the importance of cutting regulations and maintaining the Republican tax cuts as important issues that could be in jeopardy if Republicans do not maintain a majority. 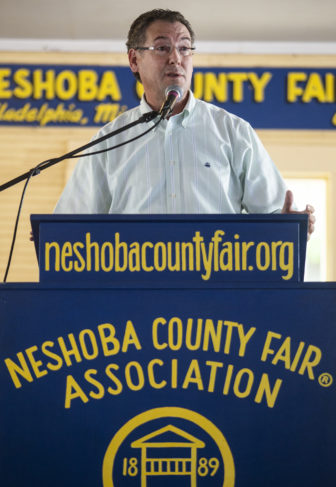 Guest and Evans are running in the only vacant U.S. House seat in the state. The incumbent, Gregg Harper, a Rankin County Republican, is retiring after holding the 3rd District post for 10 years.

At what appears to be his final Neshoba County speech, Harper said he is glad Guest will be succeeding him as the 3rd District U.S. House member and expressed frustration with Evans for saying that he did not look after the entire district. Harper said if Evans was so dissatisfied he should have run against him.

But Evans maintained that the entirety of the district, which stretches from east Mississippi where the Neshoba County Fair is located, to southwest Mississippi, has not benefitted in recent years.

“We are going to take care of y’all folks in Rankin County just like we take care of everybody else,” Evans said. “But the mafia down there will not run the 3rd Congressional District anymore. It is going to be fair to everybody and we will put things in all parts of the district.”

Guest, the district attorney for Rankin and Madison counties, defeated five other candidates to win the Republican nomination earlier this year and is considered a heavy favorite to win in November. 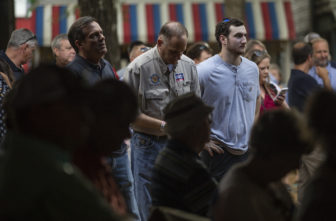 Evans, who has touted his rural roots and has highlighted his state legislative nickname of “Big Country,” touted himself as a conservative Democrat who is anti abortion and pro guns.

He also used the speech to take a shot at Lt. Gov. Tate Reeves and the widening of Lakeland Drive in Rankin County and the efforts to build a frontage road from Reeves neighborhood off Lakeland Drive to a nearby shopping mall.

He referred to the project as “tater tot expressway.”

One issue where there appeared to be a significant difference between the candidates was on immigration. Guest spoke of building a wall and securing the border. Evans also said securing the border is importance but said immigrants are important to the chicken growers and farmers throughout the district.

“I am for securing the border, I am for … getting things right so immigrants can become citizens,” he said.