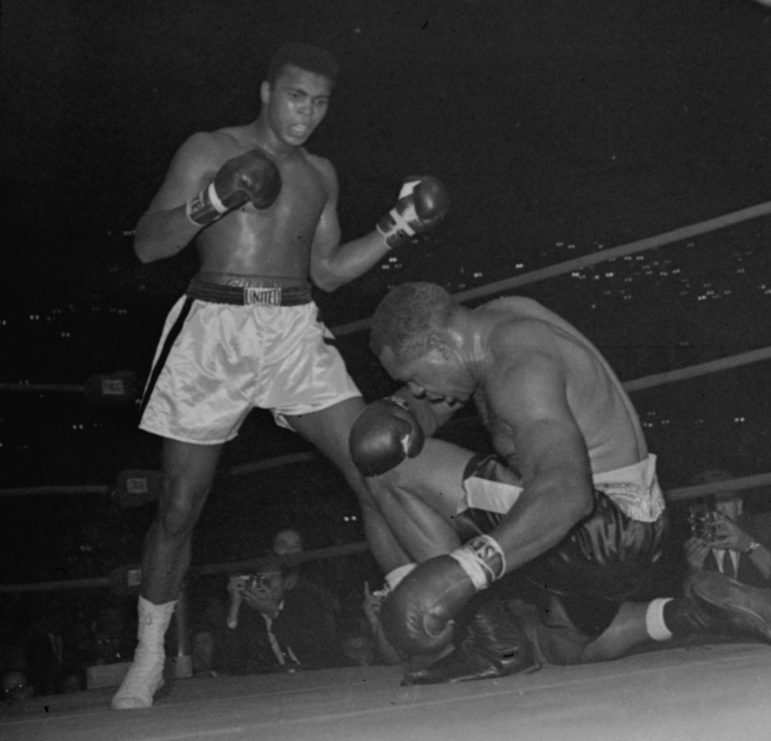 Archie Moore (down on one knee) was 49 years old when he fought Muhammad Ali (then Cassius Clay) on Nov. 15, 1962. Clay called him “Ancient Archie.” Clay knocked Moore out in the fourth round of a scheduled 12-rounder, but Moore, who will be inducted into the Mississippi Sports Hall of Fame Saturday night, holds the boxing record for knockouts with 131.

The only question about whether or not Archie Moore, one of the greatest boxers of all-time, deserved to be in the Mississippi Sports Hall of Fame was a fairly important one:

Was Moore really from Mississippi?

And perhaps Archie Moore, who died in 1998, should have the last word on this. Said he: “My mother should know since she was there.”

This much we now know: Archie Moore was born Archie Lee Wright on Dec. 13, 1913, in Benoit. His parents separated when he was an infant. He and a sister were sent to live with an aunt and uncle in Collinsville, Ill., 14 miles from St. Louis, when he was 3. He was raised in St. Louis and took on the surname of his aunt and uncle, Cleveland and Lillie Pearl Moore.

He grew up amid poverty, attending segregated schools, until Cleveland Moore died when he was 15. At that point, Archie Moore began running with street gangs, committing petty crimes and was sent to a reform school. He never graduated from high school.

He was released from the reform school for good behavior, took a forestry job and began to box as an amateur in 1933. By 1935, he turned professional and began one of the longest, most active and most successful boxing careers in history of the sport.

You could write a book about Moore’s career – and people have – but a long, long story is made short in the items that follow: 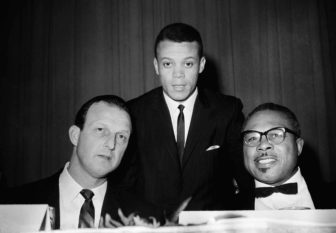 Stan Musial, left, Maury Wills (center) and Archie Moore were honored by the St. Louis chapter of the Baseball Writers Association of America at the group’s annual dinner, Jan. 29, 1963 in St. Louis. Musial was named St. Louis Baseball Man of the Year. Wills was honored for outstanding achievement and Moore for meritorious service to sports.

• Those were the first and last of 131 career knockouts, a world record for any fighter in any division. His career record was 186-23-10.

• He was nicknamed “The Mongoose,” because of a unique, slashing boxing style later adopted by Muhammad Ali, Sugar Ray Leonard and others. While constantly moving, he would punch with one hand, while the other dangled at his side. Late in his career, he trained Ali and then fought him.

• Most of Moore’s success came amazingly late in his career. He did not fight for a world title until he was 39 years old when he defeated Boxing Hall of Famer Joey Maxim in a unanimous, 15-round decision on Dec. 17, 1952, in St. Louis. Incredibly, it was Moore’s 158th career professional fight.

• He held that light heavyweight world championship for nine years, another boxing record.

• Moore fought all over the world, in Australia, in England, in Panama, in Germany, in Mexico, in Brazil, in Uruguay and, famously, nine times in Argentina, where, for a time, he lived in the palace of Eva and Juan Peron.

• When other boxers, such a Marciano avoided him, Moore waged publicity campaigns, soliciting the support of influential sports writers such as Red Smith to help him secure fights.

“When he was a world champion, he taught himself to type because he was writing so many letters to various people around the country,” son Billy Moore said. 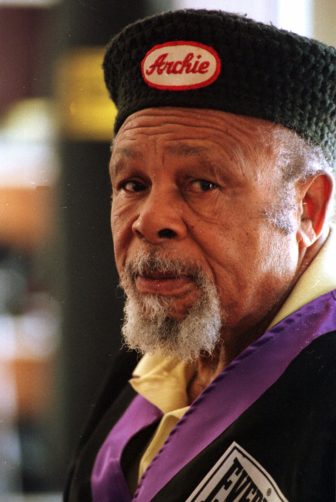 This photo of Archie Moore was taken in 1997, a year before his death.

After retirement, he founded the Any Body Can (ABC) Youth Foundation in San Diego, using boxing as a lure to inspire and educate inner city youth and prevent them from falling into dangerous lifestyles.

“My dad saw the gang and drug problem that was happening with inner city youth all over this country,” said Billy Moore, who now runs the ABC Foundation. “He believed in prevention rather than incarceration.”

Want more? Archie Moore also became an accomplished Hollywood and TV actor late in life. He played, to positive reviews, the role of Jim, the runaway slave, in the Hollywood’s adaptation of Mark Twain’s The Adventures of Huckleberry Finn. He acted in several other movies and TV shows such as Perry Mason, Wagon Train, Family Affair, and Batman.

Archie Moore has been inducted into the World Boxing Hall of Fame. He has been ranked by various publications as the No. 1 light heavyweight of all-time. He is in various San Diego, St. Louis and California halls of fame, and, come Saturday, he will be in the Mississippi Sports Hall of Fame.

And what would Archie Moore think of that?