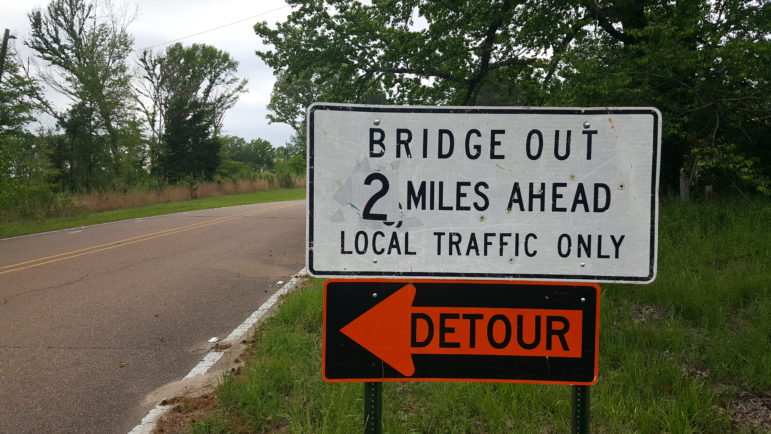 Drivers in Mississippi are being confronted more frequently by signs like this one, at the intersection of Kennebrew Road and U.S. 49 in Hinds County.

Update: The Mississippi Office of State Aid Road Construction on Tuesday said, as of Monday, there were 114 unsafe bridges recommended for closure that had not been closed.

In less than 24 hours, more than 100 bridges that connect many rural and suburban Mississippi commuters to their jobs in larger cities could be closed around the state,  Mississippi Department of Transportation officials said on Monday.

The announcement came the same day MDOT crews closed a locally owned bridge along Springridge Road in Raymond, located along a route Byram commuters use to get to and from the Jackson metro area.

The Hinds County bridge is one of many throughout the state included in Gov. Phil Bryant’s state of emergency proclamation last week that orders MDOT to immediately close city and county bridges judged deficient by federal National Bridge Inspection Standards and the Mississippi Office of State Aid Road Construction, or the state could potentially lose federal funding.

MDOT Executive Director Melinda McGrath said those federal dollars could amount to about $525 million, which helps fund major repairs on locally owned roads. The move could also cut off MDOT’s ability to reimburse its contractors.

“It’s very big,” McGrath said. “The state needs more money for transportation — whether it’s locals or the state — not less.”

Information from the Office of State Aid Road Construction, which helps counties maintain roads and bridges that the state does not maintain and administers a program that helps repair or replace the state’s worst bridges, shows that 542 bridges were closed as of April 10.

Though counties are ultimately responsible for repairing and replacing local bridges, McGrath said it’s also up to state leaders to find a solution that provides the money needed for local bridge repairs.

“The counties just cannot afford to do it,” she said.

MDOT has offered counties dirt, signs and other resources to assist with their bridge closures. McGrath said just about every county in the state has closed its bridges listed except Hinds, Jones, Jasper, Clarke and Wayne counties.

“Jones County says, ‘We’re not going to close it. If you want to close it, come and close it yourself.’ ” McGrath said.

Jones County Chief Administrative Officer Danielle Ashley said the county’s board of supervisors previously decided MDOT should be tasked with closing the bridges, citing a county engineer opinion that its bridges were not a public safety risk.

“The board would continually ask our county engineer and he advised that they don’t need to be closed,” Ashley said.

Ashley said other deterrents included the public inconvenience and the high cost of repairs, among other things.

The Springridge Road bridge in particular is losing stability due to erosion and shifting structure. McGrath said a really heavy rain could one day flood the creek below, and that water flowing under the bridge could slam branches and other debris from upstream into those piling, causing it to collapse.

McGrath said the bridge is also traveled by overweight vehicles, such as semi trucks, that weigh far more than the bridge can safely support. 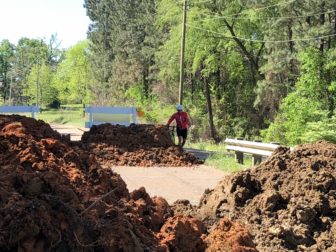 “If the overweight vehicles would stay off the bridges, the bridges could remain open until the counties could work through the limited funding they have and get these things repaired and replaced,” McGrath said.

Until then, commuters will be seeing more bridge closures. Byram resident Henry Corley, a road cyclist, had to walk around the bridge’s barriers Monday shortly after the closure.

Corley said he has encountered more closed bridges than usual since last week, including three on Friday.

“There was one road where I had gone through, and two days later, it was blocked off,” Corley said. “I didn’t know anything about it and had to go twelve more miles than normal on my bike.”

Read the latest on bridge closures in Mississippi.