In this April 6, 2016, photograph, a technician applies the logo stencil to the side of a Titan truck on the assembly line at the Nissan Canton Vehicle Assembly Plant in Canton, Miss.

For weeks, it’s been impossible to ignore: The constant television commercials, pep rallies and T-shirts emblazoned with slogans of support. Ubiquitous ads on social media and around the Internet. Celebrity endorsements. Rhetoric and accusations of mudslinging.

The intensity of campaigning can only mean one thing — there’s an election coming up.

This time, instead of citizens going to the polls to choose the people who will run our government, the voters casting ballots — about 4,000 of them — are technicians at Nissan’s Canton manufacturing facility who will decide whether to form a union.

The election, planned for Thursday and Friday, is the climax of a drama that has been building between what is officially called the International Union, United Automobile, Aerospace and Agricultural Implement Workers of America — better known as the UAW — and Nissan since the Japanese automaker first came to Madison County in 2003.

Both sides agree the outcome of the election will reverberate well beyond central Mississippi and likely for many years to come.

Alexandra Landing, a Nissan worker, appears in a video touting the benefits of employment at the plant

For Nissan and the political and business leaders who oppose the UAW representing workers at the round-the-clock operation, a union will hurt the company’s competitiveness, especially if you consider that the leading competitor to the Altima model, which is made at Canton, is Toyota’s Camry, which is assembled at a non-union plant in Georgetown, Ky.

We're texting news that matters to Mississippians. Sign up here:

Meanwhile, the UAW, like most unions in the United States, has seen its membership plummet over the years even though the organization still has nearly $1 billion in assets.

“The reason it’s a big deal, is because (unionizing) a Southern automaker is the white whale or holy grail,” said Jeff Hirsch, who writes about unions and teaches labor law at the University of North Carolina School of Law.

Globalization of the auto industry makes it increasingly difficult for American unions to control the supply of labor as they once did. And the relocation of assembly plants and suppliers from UAW’s strongholds in Michigan to the South, where union membership isn’t part of the cultural fabric, has made the union’s challenge at Nissan even more more foreboding.

UAW officials do not seem discouraged. 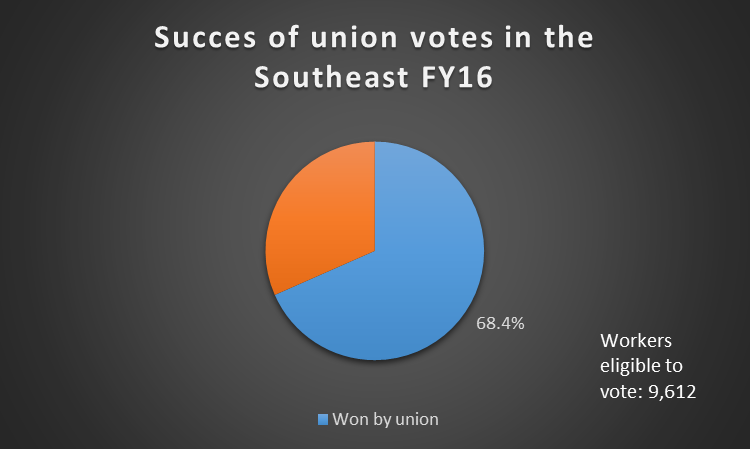 The success rate of pro-union elections in the Southeast mirrored the national rate of 68 percent in fiscal year 2016, an analysis of federal data show. 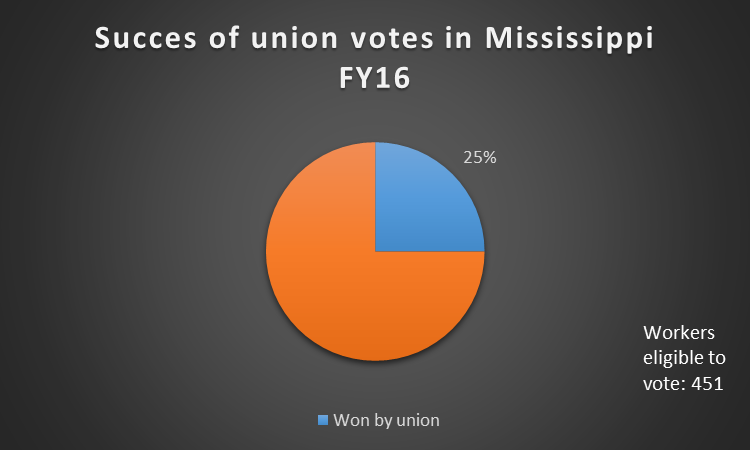 In their campaign talking points, they tout the success rate of union elections around the country. National Labor Relations Board information for the 2016 fiscal year shows that there were 86,145 union-eligible employees; 68 percent of the elections held that year went for union representation.

A Mississippi Today analysis of 2016 NLRB data shows that when the American South is broken out, the success of union votes was consistent with the national rate, with 68.4 percent of elections in favor of forming a union.

Mississippi held just four union elections that year — in Columbus, Meridian, Moss Point and Tunica — for 451 workers. Only one of those elections was a win for the union, resulting in two workers being represented by the International Association of Machinists and Aerospace Workers.

Workers at Nissan’s other North American facility, in Smyrna, Tenn., voted against UAW representation in 1998 and 2001.

The union got close in 2014, when workers at a Volkswagen plant in Chattanooga narrowly voted down UAW representation by a vote of 712 to 626; the next year, skilled trades workers at the VW plant by a vote of 108 to 44, agreed to have the UAW represent them, but the German carmaker has declined to negotiate.

The bigness of this deal is evidenced in the intensity of the campaign.

If you’ve watched television, driven through a residential neighborhood in the Jackson metro, logged onto an ad-supported smartphone app or surfed the web, you’ve probably seen one of Nissan’s “Our Team Our future” spots or one of the UAW’s “Do Better Together.”

Steve Marsh, the plant manager at Nissan Canton, talks about record sales and the success of its truck lines in March. Marsh has also appeared in videos discouraging workers from supporting the UAW effort.

Both sides have deployed their foot soldiers, armed with carefully honed talking points ahead of the election. Slick, professionally produced commercials notwithstanding, the campaign’s waning days have not been without the bare-knuckle rhetorical brawling of political races as what Nissan and the UAW both call education campaigns draw accusations of intimidation tactics from the other side.

Gary Casteel, the UAW’s secretary-treasurer and a veteran organizer, said Nissan kicked its anti-union campaign “into another gear” with mass meetings, videos and one-on-one meetings with individual workers since the election was announced in mid-July.

“This is a company that consistently for the past few years has been saying, “It’s the employees’ choice. We’re not anti-union.” Then the minute these employees file for an election this company comes out guns blazing, swinging like the final round of a prize fight and doing everything under the sun to threaten and intimidate them,” Casteel said in a phone interview.

Casteel said the Nissan approach is underscored by a national labor complaint made public on July 26 that alleges that a Nissan supervisor illegally threatened workers with lost wages and benefits and plant closure if the union comes in. The UAW cites a dozen examples of federal labor relations complaints against Nissan.

Nissan, which says that it has as much right to rebut the union’s claims with its own education materials, denies the allegations in the labor complaint as well as the UAW’s charges of intimidation in general.

“Allegations of intimidation made by the union are totally false. Nissan respects and values the Canton workforce, and our history reflects that we recognize the employees’ rights to decide for themselves whether or not to have third-party representation,” Parul Bajaj, a spokeswoman for Nissan, said in an email to Mississippi Today.

“Voters have the right to know the company’s perspective on what is best for our future and the full story about what it means to have a union,” she continued. “The union only wants employees to hear one side of the story. The company has the right and obligation to provide employees with full information, and it will continue to do so.”

Bajaj added that a recent “UAW corruption scandal in Detroit and the history of strikes, layoffs, and plant closures at UAW-represented plants, along with the many false claims and promises made by the UAW during this campaign.” On July 26, a federal grand jury in Michigan indicted a former executive of Fiat Chrysler Automobiles and the wife of a late UAW official for conspiring to steal money that should have gone to a training center.

Dennis Williams, the UAW’s president, said in a letter to members that the union’s leadership had absolutely no knowledge of the alleged fraudulent activities.

It wouldn’t be a campaign without surrogates.

Fighting in Nissan’s corner is the state chamber of commerce, the Mississippi Economic Council, and most of the state’s Republican leadership.

“I don’t think we need a union to come in there and tell us how to make a better automobile. They can get back on the Bernie Sanders bus and go back to New York, and I’ll pay their way,” Bryant quipped, amid applause.

An Independent from Vermont, Sen. Sanders spoke at a rally in support of the UAW in March.

A report from Mississippi Economic Council attempts to bolster the governor’s case that Nissan is getting along just fine. It states that jobs in the automotive manufacturing industry grew more than 64 percent between 2010 and 2016, now employing 18,251 people who earn an average of $50,501 per year.

U.S. Sen. Bernie Sanders, I-Vermont, greets supporters of the UAW at a Canton rally in March 2017.

In addition to Sanders, the UAW also has backing from prominent Democrats and progressive activists such as Jackson Mayor Chokwe Antar Lumumba, U.S. Rep. Bennie Thompson, national NAACP leader Derrick Johnson and actor Danny Glover, who has visited the state frequently to rally for the union, including making comments at the Jackson City Council meeting this week.

“We’ve seen what has happened when men and women and communities have stood up in the face of intimidation. Jackson knows that intimidation very well,” Glover said. “Mississippi knows that story very well. It’s a part of the narrative. And they’ve been courageous. These workers are courageous. We need you to support them in every way. We need you to stand with them.”

Nissan, UAW revv up campaign for workers’ hearts and minds