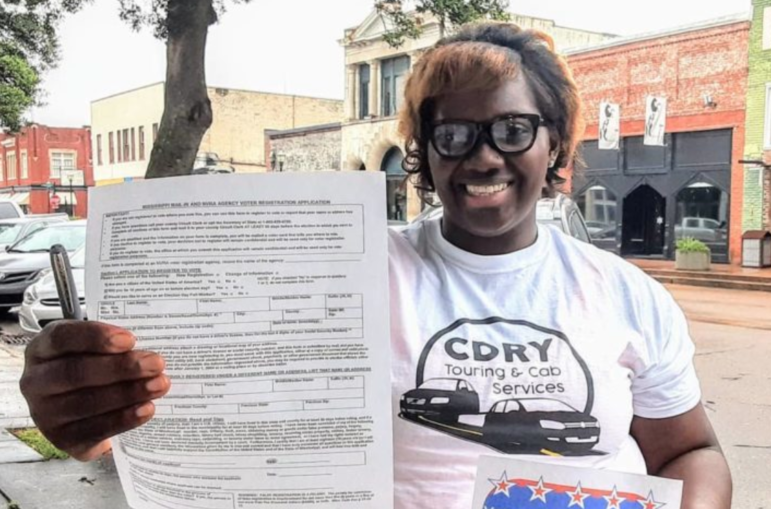 CLARKSDALE — Frustrated by the response of elected officials after the pandemic slowed her business, Cassandra Wilson has used her down time for something she’d never done before: registering Delta residents to vote.

Wilson, the 35-year-old mother of three whose taxi and tourism business went from more than 50 rides a week before the pandemic to zero, was not qualified to receive COVID-19 relief funds.

She blamed the lack of federal, state and local government leadership to ensure the financial security for people in the Mississippi Delta, where the pandemic has heightened economic and health disparities.

“I felt like a lot of little people kind of got left out the loop,” Wilson said. “If you didn’t fall on the right end of the spectrum, you lost your house, you lost everything because of these big people who could not relate to everyday, average working people who were born into poverty. There are households around here with two full-time, 40-hour working people who are barely able to stay above water.”

She wanted to change how politicians’ decisions affected her life and those around her. So with the challenge of prohibitive voting laws and a deadly pandemic, she initiated the first step: registering people to vote. 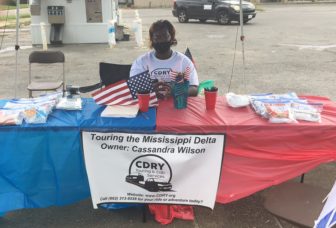 In June, Wilson set up a tent and a table on a Clarksdale street with voter registration packets, snacks, pens, masks, and sanitizers laid across the tables. Whether residents walked up to register or drove through, each individual received masks and sanitizer. With her taxi business at a halt, she decided to drop registration packets off to others who could not attend the drive due to work, she said.

She took off from work at her other full-time job, sacrificing income to work on these voter registrations drives. With help from her 13-year-old daughter and 12-year-old niece, the trio has helped 20 people register to vote so far across three Delta towns: Lula, Friars Point and Clarksdale.

Wilson’s goal is to get 200 people registered ahead of the Oct. 5 registration deadline.

One challenge Wilson has experienced is a lack of education around government and the voting process prevents people from voting.

“I think this young lady was maybe like 22 years old and she asked me, ‘What is voting? Who do you vote for?’ and I love that,” Wilson said of a registrant at one of her drives. “(I said), ‘This is how you vote, this is why you vote’ … We have a lot of that in the Delta.”

More than 23,000 people reside in Coahoma County, which has about 15,000 eligible voters. But voter turnout has remained fairly low. For example, in the March primaries, only 23% of eligible voters cast a vote, according to data from the Circuit Clerk’s office.

Ray Sykes, chair of the Coahoma County Democratic Party, said he’s heard “no one is coming out” to the polls because community members fear going grocery shopping, church and gathering in large groups.

Despite this, he expects a record turnout, but he said it falls on the local leaders to get folks out.

Some Delta-based political leaders expressed more concern with getting people to the polls rather than voter registration, especially now during a pandemic.

“Everyone wants to press voter registration … which is great. I’m not knocking it. The real problem is getting people out to vote,” said David Rushing, chair of the Sunflower County Democratic Party. “We’re under-resourced, and the state is under-resourced.”

But Mississippi doesn’t make it easy for people to vote.

The state has some of the most restrictive voting laws in the nation, and is one of only six states which has not taken action to make voting safer during the pandemic. For instance, Mississippians must provide an excuse in order to vote early.

In July, Gov. Tate Reeves signed a bill into law stating people could only vote early during the pandemic for two reasons: if they are under a physician-imposed quarantine or providing care for a dependent under quarantine.

“It’s not the intent (of the legislation) to make it harder to vote,” Senate Elections Chair Jennifer Branning, R-Philadelphia, told Mississippi Today.

To register to vote, an individual must be 18 or older, a resident of Mississippi, and cannot be convicted of disenfranchising crimes. On Election Day, voters must present a Mississippi voter ID, according to the Secretary of State’s Office.

Pam Shaw, a longtime Democratic political strategist and president of P3 Strategies, said it should be incumbent on circuit clerks and county supervisors to create innovative and safer ways to do voting. She suggested creating curbside voting and expanding voting hours in the weeks prior to the election.

“You do it in a way that does not compromise staff of the clerk’s office and the people who come,” Shaw said. “If you say, five days before, or two weeks before, it gives them time. … It gets rid of all of the people who may be hesitant and eases the burden you’re going to have on Election Day.”

But by taking matters into her own hands — battling a public health crisis, small town politics and what many call modern-day voter suppression — Wilson said she hopes that her small efforts will make an impact during the upcoming election, even if just one person goes to the polls because of her work.

“I just want to see a better Clarksdale, want people to do better, especially African Americans,” Wilson said. “We don’t know how this election is going to go in November, but I can tell you one thing — it’s going to be very difficult for us to go to the polls the way we used to.”