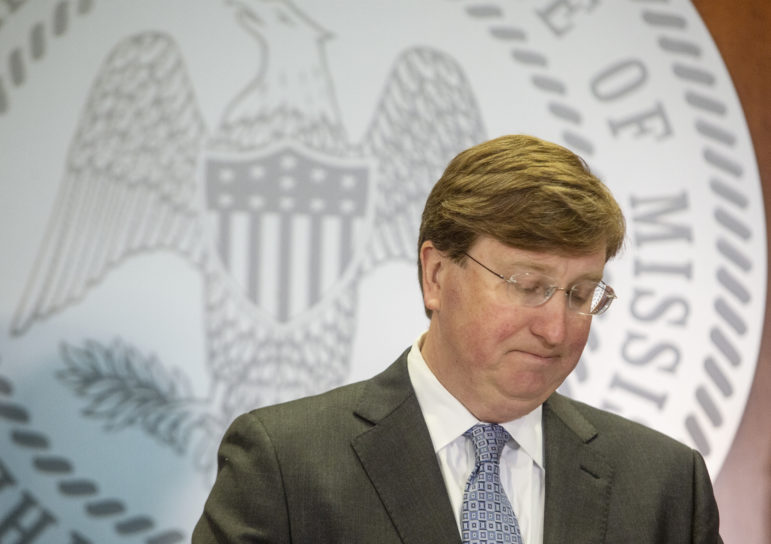 Gov. Tate Reeves speaks to media about a shelter-in-place order for Lauderdale County during a press conference in Jackson, Miss., Tuesday, March 31, 2020.

Gov. Tate Reeves, who says his primary goal is to take steps to lessen the impact of COVID-19 in Mississippi, recently lamented how some people try to politicize issues surrounding the pandemic, such as mask wearing.

“One of the problems where we find ourselves as a country is that there are certain groups that want to politicize everything,” he said last week during a press conference. “We are in the middle of a pandemic. And what we are trying to do is encourage Mississippians to do the right things based on data, based on evidence, based on the best advice we get from our experts.”

Yet Reeves, who for weeks has begged and cajoled Mississippians to wear a mask to combat the coronavirus, opted to forego wearing a mask as Donald Trump accepted the Republican nomination to run for a second term as president. Reeves was among the about 1,500 people in attendance sitting shoulder to shoulder on the White House lawn for the president’s acceptance speech.

Reeves said he went maskless for only a short time at the event. For months, Trump has been lukewarm at times and downright hostile at other times regarding the wearing of masks. Some would argue there have been occasions when the president has made the issue of wearing a mask political.

So was Reeves making a political statement when he joined the president and his supporters in collectively choosing not to wear a mask at the most public and most political of events?

Reeves’ decision to not wear the mask at the White House came a few days after he did the same at an event in support of North Carolina Republican gubernatorial candidate Dan Forest, who has questioned the effectiveness of mask wearing in preventing COVID-19. In essence, it was another political event involving politicians who seemingly were making a political statement by not wearing a mask. Reeves was a willing participant at those events.

When asked about the political optics of not wearing a mask at the White House, Reeves stated that 366 people, including himself, of the 1,500 at the event had been at the Republican National Convention in North Carolina the four days before the president’s speech and had been tested at least once.

“Everything we do today during the COVID-19 is a scenario in which we have to evaluate the risk and the reward,” Reeves said. “I certainly believe, as did a number of my fellow Republican governors around the country, that this election is important enough and (because of) our relationship with the president we wanted to be there to support him. We wanted to be there obviously to show our support, and that is a decision we made.”

Indeed, in his coronavirus update news conferences and on social media, it has seemed at times Reeves is trying to emulate Trump. Granted, he has not been at odds as much with medical experts as the president sometimes appears to be. Reeves, for instance, has not touted the possible ingestion of disinfectants as a remedy for the coronavirus.

But in recent days, Reeves has referred to COVID-19 as “the China virus” and seemed to imply that it was “unleashed” from a lab in that country, despite no proof of that occurring.

Recently, when asked about protesters outside of the White House who many believe were overly aggressive with people leaving the president’s acceptance speech, the governor spoke of a time where he said the country was less contentious.

“There is no question that the way some of these protesters is acting is outrageous,” Reeves said. “It is ridiculous….I grew up in an America where it was OK to disagree with people on politics…while still understanding we were created in God’s image. It is beyond my ability to comprehend why some of the protesters are acting the way they are.”

Some might have said the same in 2010, as former Georgia U.S. House member John Lewis, a civil rights icon who recently died, and other African American members of Congress were accosted as they went to the Capitol to vote on the Patient Protection and Affordable Care Act. According to media reports, they were called the N-word by a group of protesters, and at least one House member was spit upon. Law enforcement had to step in as it did after the president’s speech.

“They were shouting, sort of harassing,” Lewis said. “But, it’s okay, I’ve faced this before. It reminded me of the 60s. It was a lot of downright hate and anger and people being downright mean.”

Lewis knew more than most about meanness. He literally had his skull fractured during the 1960s by Alabama law enforcement while marching for equal treatment under the law.

Reeves bemoans, sometimes, what he says is politicizing of coronavirus