A former director at the Mississippi Department of Education has been charged in connection to an alleged conspiracy to circumvent the state’s contract procurement process and award contracts to individuals in exchange for kickbacks.

Cerissa Neal, the former director of the Office of Educator Licensure, is accused of conspiring with three others to split contract requests from one contract into smaller contracts in order to avoid the required competitive bidding process. She would then allegedly award the contract to her co-defendants’ businesses at an inflated price.

The federal indictment charges Neal and three Tennessee-based business owners of fraud by “bid rigging, false quotes, and altered purchase orders” in order to make money for themselves and their businesses.

But Neal’s attorney Lisa Ross says if her client is being targeted, the Mississippi Department of Education should be targeted as well.

“If this goes to trial, the Mississippi Department of Education is going to be on trial,” said Ross. “Because these were their policies, and the way this thing played out was pursuant to their rules and regulations.”

In a statement, State Superintendent of Education Carey Wright said the department of education was glad to see action was being taken.

“The Mississippi Department of Education (MDE) is pleased to see legal action being taken against the individuals who are alleged to have defrauded the MDE and the State of Mississippi. We reported this suspected activity in October 2017 to the Office of the State Auditor (OSA) when we discovered evidence that a former employee may have violated state procurement laws,” Wright said.

“At the time of the discovery, we conducted an immediate, internal audit of all business transactions in which the former employee was involved and provided the audit results and all related records to the OSA. We are eager to continue to assist the investigation through to its conclusion.” 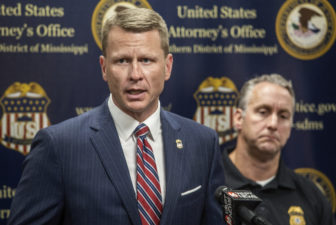 U.S. Attorney Mike Hurst, whose office brought the charges against Neal, said pursuing public corruption is a high priority for his office and a personal mission of his.

“Those who defraud the public’s trust will find themselves standing before a court of law to answer for their wrongs. Public corruption erodes faith in our democracy and decays the very soul of our form of government,” he said in a statement. “…We will continue to pursue corruption wherever it may lead.”

Other contracts awarded by the Mississippi Department of Education have been the object of scrutiny in recent years. The department’s awarding of contracts totaling over $600,000 to former co-workers of State Superintendent of Education Carey Wright also garnered attention in 2016.

The department’s payments of $214,469 in fiscal year 2015 to Joseph Kyles, a Memphis community activist named as a co-defendant of Neal’s, raised eyebrows several years ago, including those of then-State Auditor Stacey Pickering.

The payments were flagged in a report by the Performance Evaluation and Expenditure Review committee, the state’s legislative watchdog agency.

“I applaud the investigative work in this case and that of our federal partners,” said State Auditor Shad White, who has repeatedly criticized the department about spending in recent months. “In 2017, the auditor’s office provided information about these defendants to federal authorities, so I’m grateful for the work of those investigators and former Auditor Pickering as well.”

In cases where a competing quote was required by the state education department, Neal is accused of obtaining “false and inflated quotes, by herself and from the other conspirators, designed to make the intended conspirator’s business the lower bid,” according to the indictment.

Neal would then receive payments from the winning bidder, one of her three fellow co-defendants: Kyles, David B. Hunt and Lambert Martin, all of whom owned businesses in Tennessee.

The crimes reportedly occurred over a three-year period from 2013 to 2016. The Kyles Company received the largest amount of state funds at more than $650,000, according to court documents.

The allegedly fraudulent contracts were for transferring teacher personnel record files from microfiche to digital storage media and purchase orders for educational classroom equipment. The equipment was to be paid for from federal funds.

Neal, who pleaded not guilty on all counts, referred questions to Ross, her attorney.

“We were totally shocked by the indictment. It’s too early to say where we’re going, we’re looking at all of our options and in the end we’re going to do what’s best for my client,” Ross said. “We’re going to work to make sure that she’s not singled out. That’s our goal.”

Ross also said she urged people to remember they are hearing “only one side of the story.”

Hunt, the owner of Doc Imaging and Hunt Services in Jackson, Tenn., said he hired Kyles as a consultant to help his document management company find business over a three-year period. He said he has all of his receipts and does not know why he’s been charged in connection with this.

His attorney Michael Dawkins said the allegations “paint a picture that the facts do not support” and that his client did not break the law.

“He is confident that as the facts of this case are revealed, he will be cleared of all charges, and his good name will be restored,” said Dawkins.

According to the indictment, Neal received more than $42,000 in direct or indirect payments from her co-defendants.

The trial has been set for Sept. 28 before U.S. District Court Judge Tom S. Lee.