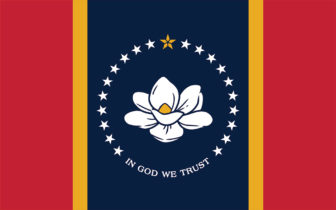 “In God We Trust Flag”

Mississippi voters in November will adopt or reject a new state flag with a magnolia blossom instead of a Confederate battle emblem, now officially named the “In God We Trust Flag.”

An appointed commission tasked with finding a replacement for the 1894 Confederate themed flag on Wednesday made its final choice for the Nov. 3 ballot, after winnowing the field from about 3,000 public submissions over the last two months.

The commission, after dickering over some last-minute design tweaks and contemplation of delaying to allow for commissioning a poll of likely voters, voted 8-1 to adopt the “New Magnolia” flag over the “Great River” flag, the other finalist.

The commission also voted unanimously to name and market the chosen design to voters as the “In God We Trust Flag.” The Legislature, when it voted to remove the old Confederate themed flag, stipulated in law that whatever design the commission chooses must have those words on it, and that it could not have the Confederate emblem.

Commission Chairman Reuben Anderson addressed the commission and a small crowd of observers and media on Wednesday after the vote. He said that all his life, Mississippi has “been at the bottom,” and the divisive Confederate flag played into that ranking.

“On Nov. 3, I think that will start to change. We won’t instantly move to the top, but I can assure you we will move,” Anderson said. “… We’ll maybe be on the bottom all my lifetime, but our children and grandchildren will see us ascend … (the new flag) sends the message that we are open for business. It sends the message that we live in the future and not the past.”

Anderson received a standing ovation from fellow commissioners and the audience after his comments.

The Mississippi Legislature, after decades of debate, voted in June to remove the 1894 state flag with its divisive Confederate battle emblem. The legislation it passed created the commission to choose a new flag to put before voters on the Nov. 3 ballot. Voters can either approve or reject the new design. If they reject it, the commission will go back to the drawing board and present another design to voters next year. 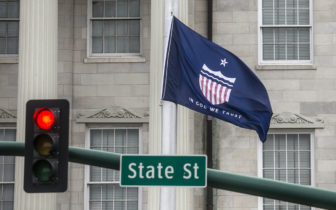 The “Old River Flag” was the other finalist. The commission chose against it on Wednesday.

The design chosen Wednesday has a magnolia — the official state tree and flower — blossom on a blue background surrounded by stars with gold and red vertical stripes on the ends. The other finalist had a red-and-white shield on a blue background, with blue wavy lines representing the Mississippi River. Both designs had a prominent star made of diamonds, representing the Native Americans who first inhabited the area before it became the 2oth state in 1817.

While the Great River shield flag, designed by Micah Whitson, a University of Mississippi graduate now living in Boston, did not get chosen, the commission voted to name Whitson as a contributor to the chosen flag because he designed the Native American star included in both designs.

In an online poll on the MDAH website, the magnolia flag led the shield flag with nearly 60% of the vote. But commissioners noted this poll was not scientific and that people from across the country cast online votes. They debated postponing their final vote and conducting a scientific poll of registered Mississippi voters.

But they were reminded that the secretary of state’s office had given Wednesday as the deadline to get the proposed flag on the Nov. 3 ballot.

Commissioner T.J. Taylor, policy director for House Speaker Philip Gunn, wanted to postpone the vote for a poll and had pitched some last-minute design changes that were voted down Wednesday. He cast the lone vote against choosing the magnolia flag, but the commission then voted unanimously to adopt it and send it on for placement on the ballot.

In addition to voting to name the design the “In God We Trust Flag,” the commission approved a voter education initiative to be led by the Mississippi Department of Archives and History that will include creation of a documentary about the flag change, parts of which will be used in a voter education campaign.

Among the small audience at the commission meeting Wednesday was Lauren Smith of Tupelo, an organizer of “Let Mississippi Vote,” a group angered that the Legislature removed the old state flag without letting people vote on it. The group has mounted a petition drive to try to place on a statewide ballot flag choices that would include the 1894 flag with its Confederate emblem.

“We want to provide an opportunity for the people of Mississippi to vote, and have a say-so in what flag we have,” Smith said. “That is the sole purpose of the Let Mississippi Vote initiative, to give Mississippi voice.”