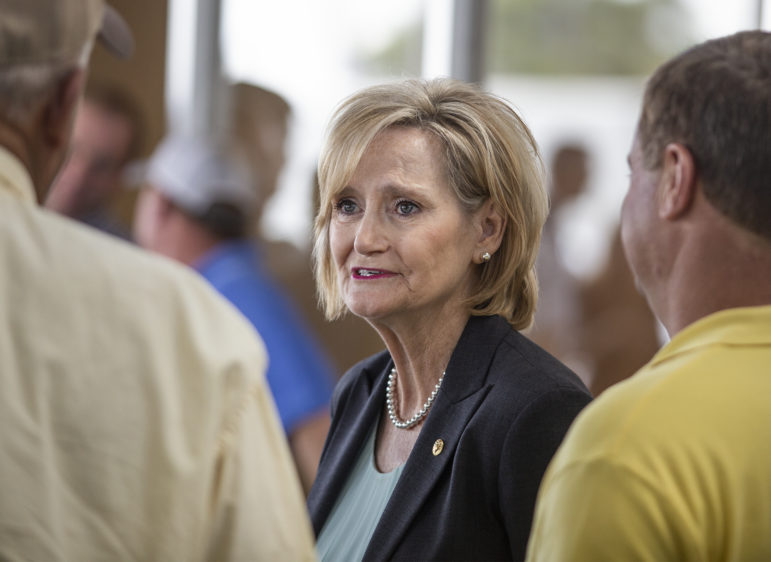 Sen. Cindy Hyde-Smith greets voters at a campaign event in 2018.

Incumbent Republican Sen. Cindy Hyde-Smith, about two months from the November election, is keeping a low profile, riding an apparent lead in the polls and banking on proxy support from President Donald Trump’s popularity in Mississippi.

She’s so far done little public campaigning in person or virtually amid the pandemic.

“I definitely think the school of thought with (presidential candidate Joe Biden) is the same thing going on in Cindy Hyde-Smith world: Let’s lay low. We have a lead,” said Henry Barbour, longtime Republican strategist and Mississippi Republican national committeeman. “That’s a tried-and-true strategy. If you’re winning, keep your head down. That’s the same reason that (former U.S. Sen.) Thad Cochran didn’t debate Chris McDaniel in 2014. Why do it? Don’t give your opponent the platform.”

Hyde-Smith campaign spokesman Justin Brasell said Hyde-Smith “has not slowed down one bit,” is making public appearances and doing “telephone town halls and lots of small group meetings.” But many of these events are for her job as senator, which Brasell said is her main focus rather than campaigning. These tele-town halls have apparently not been widely publicized or archived for public viewing.

Hyde-Smith, who declined an interview for this article, planned to be in Gulfport for the opening of the Mississippi Aquarium this week, Brasell said, but “we really don’t have any public campaign events scheduled right now.”

READ MORE: Mike Espy has built a robust and historic Senate campaign. Can he win?

In lieu of public campaign events, Hyde-Smith has been posting “100 Accomplishments in 100 Days” to social media — listing her accomplishments as senator, such as supporting “record ICE detention capacity with no limitations on interior enforcement operations,” and helping provide hundreds of millions of dollars in grants to charter schools nationwide.

Brasell said Hyde-Smith’s campaign is up and running with offices in Jackson, Tupelo and Gulfport, has hired seven staffers and has volunteers in every county in the state. He noted campaign volunteers had a big presence at a recent boating Trump rally on the Coast, with Hyde-Smith signs on many boats and homes along with waterway for the boat parade.

“We are anxious to get out and hold events and do normal campaign things, but she’s being super careful and following guidelines,” Brasell said. He said the campaign has received an invite to participate in a debate, but hasn’t decided if it is doable because of her Senate work schedule.

Hyde-Smith, 61, a cattle farmer from Brookhaven, was serving as state commissioner of agriculture when she was appointed by Gov. Phil Bryant in 2018 to temporarily fill the Senate seat vacated by longtime Sen. Thad Cochran. She beat Democrat Mike Espy in a 2018 special election runoff to fill out the term, becoming the first woman elected to Congress from Mississippi. Espy is challenging Hyde-Smith again this year.

Trump and some in the Mississippi Republican hierarchy were reportedly lukewarm on Hyde-Smith when Bryant appointed her, largely because she had served for years in the state Legislature as a Democrat. But Trump endorsed her and stumped for her in Mississippi in 2018. In turn, she has been one of his staunchest allies in the Senate, unwaveringly supporting most of his policies and defending him during impeachment hearings.

With Mississippi considered by national pundits firmly in the Trump column for November, it’s unlikely Hyde-Smith would receive the same personal help from him this cycle, but she will likely still be a beneficiary of his popularity here.

“I think this will be a big turnout because it’s a referendum on Donald Trump and how the country is doing,” Barbour said. “I think that is going to help Cindy Hyde-Smith. George Floyd, the protests, that will help Mike Espy, but I think Democratic voters in Mississippi know that Donald Trump will win Mississippi, so it’s a little hard to get low-propensity voters to show up on the Democratic side.”

In her 2018 campaign, Hyde-Smith drew national attention from some gaffes on the stump, most notably from comments she made about attending a public hanging and about voter suppression.

Nathan Shrader, political science professor at Millsaps College, said the Hyde-Smith campaign is likely to benefit from the limits on campaigning forced by the COVID-19 pandemic.

“I sincerely believe this plays into her campaign strategy: attempt to limit face-to-face interaction or ways she could get in trouble like with the public hanging comments or posing wearing a Confederate cap,” Shrader said. “This limits the opportunity for things where their campaign might be forced to go into defense, making apologies or walking back things.”

Barbour said he believes Hyde-Smith will benefit from a large Republican presidential turnout and from “a clear choice” voters have in the Senate race.

“They are both good people, but they have differences on issues that are distinct,” Barbour continued. “Mike Espy unfortunately has taken on the positions of the liberal Democratic Party.”

Up in the polls during pandemic, Sen. Cindy Hyde-Smith’s campaign lays low