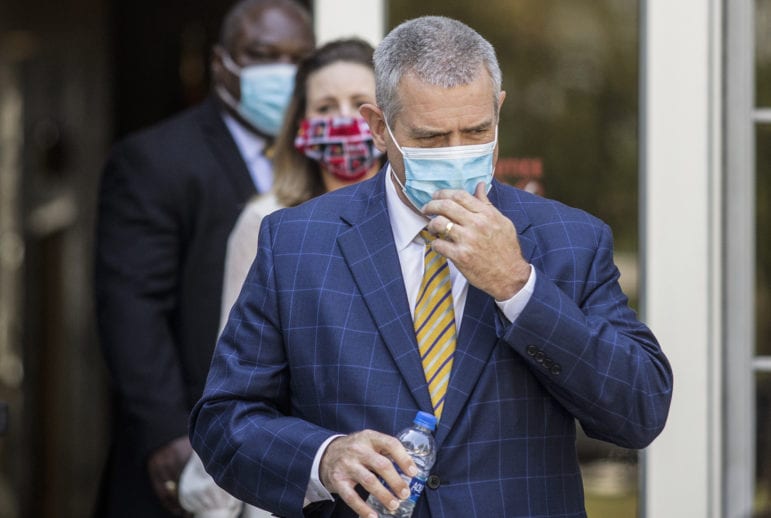 House Speaker Philip Gunn prepares to remove his mask as he leaves a press conference on Thursday, May 7, 2020.

After being at an impasse for months over the governor’s spending authority, the Legislature on Monday passed a compromise budget for the Department of Marine Resources, just days before the agency would run out of money and with two storms rolling through the Gulf.

“We agreed the issue needed to be resolved now,” said Republican House Speaker Philip Gunn, who has been at odds with Republican Gov. Tate Reeves over appropriation power, and recently filed a lawsuit against the governor over his line item vetoes of legislative spending.

Gunn and other legislative leaders say the state Constitution gives appropriation power to the Legislature, not the executive branch, and that previous governors’ spending of Gulf restoration money that flows through DMR’s budget has violated that separation for years.

“We’ve agreed to continue to work on this issue,” Gunn said Monday. “This deal is a one-time agreement for this year, it does not concede this issue or hinder anything moving forward.”

DMR, which provides marine regulatory and law enforcement services on the Gulf Coast, has been without a state budget since July 1 and was set to run out of money to operate and meet payroll at the end of August. The issue became even more urgent this week with a tropical storm and a hurricane in the Gulf and DMR providing emergency services.

At issue is control of millions of dollars a year of Gulf restoration funds Mississippi receives for oil and gas leases. The Gulf of Mexico Energy Security Act, or GOMESA, is a federal revenue sharing program for oil and gas producing states in the Gulf. For this year, the state has $47 million in GOMESA funds.

Reeves has called the legislative push to control GOMESA spending a “power grab” after the executive branch has run the program since its inception in 2006. In recent years, the amount of money coming in for Mississippi’s share of GOMESA has ballooned from hundreds of thousands a year to tens of millions.

The Legislature had been divided on the issue, with much of the Senate supporting Reeves authority over GOMESA funds. The compromise provides $27 million for projects already approved by the executive branch, and $10 million for any projects it approves this budget year. The remaining $10 million will be on hold until next year, and the Legislature will continue to haggle over executive authority over the program.

“I’m very thankful we reached an agreement to get DMR back up and rolling,” said Senate Ports and Marine Resources Chairman Philip Moran, R-Kiln, who had largely supported Reeves position. “… Next year when we come back, we will continue to work on this. We’re not very far apart at the end of the day.”

Since its inception in 2006, then-Mississippi Govs. Haley Barbour and Phil Bryant controlled approval of GOMESA projects vetted by DMR as the revenue started out small but continued to grow.

In recent years, lawmakers and others have questioned whether projects chosen are helping coastal restoration and protection, or if they are just pet political projects.

Millions in GOMESA funds have been granted to build boardwalks near casinos, a planned aquarium in Gulfport — including a tram system threatened to be “de-obligated” for not meeting GOMESA requirements — and other projects critics have said don’t meet the intended purpose.

Reeves on Monday morning, at a press conference to discuss the threat to Mississippi from a tropical storm and a hurricane this week, said he had worked with legislative leaders over the past couple of weeks and was pleased a compromise had been reached.

The Legislature reconvened Monday to pass a DMR budget, and is expected to meet briefly on Tuesday before adjourning, likely until October.