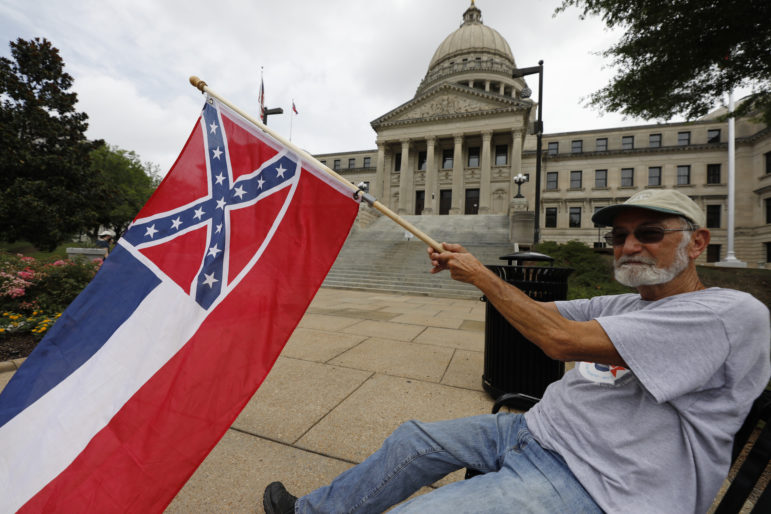 A supporter of the old state flag sits in front of the Mississippi Capitol in June. (AP Photo/Rogelio V. Solis)

Paperwork has been filed to begin the convoluted process of gathering the signatures to place on the ballot an initiative to resurrect the 126-year-old state flag that features the Confederate battle emblem prominently in its design.

Several steps must be finalized before the actual process of collecting the signatures can begin. Once the paperwork is completed, initiative sponsors will have one year to gather the necessary signatures.

In order for the flag proposal to make the ballot, the signatures of 106,196 registered voters must be obtained, or 12 percent of the total from the 2019 election for governor. The signatures must include 21,239 from each of the five congressional districts that existed in the 1990s.

If and when the initiative’s organizers begin that daunting task, they had better plan on doing extra work in the old 2nd Congressional District.

After all, that district has significantly fewer residents than the other four districts. But that does not matter. The state Constitution mandates the signatures be garnered equally from the districts as they existed in the early 1990s, when Mississippi voters went to the polls to enact the initiative process. Mississippi later lost a congressional district in the early 2000s because other states were growing faster.

In addition to the population deviation, there also is a large racial difference that could be significant. When it comes to collecting signatures of people who support bringing back the Confederate flag, it is likely safe to assume many Black Mississippians would oppose that effort.

In June, the Mississippi Legislature approved removing the state flag. The Legislature formed a commission that will recommend a flag for voters to approve or reject this November. If the design is rejected, the commission will offer another proposal in 2021.

A group called Let Mississippi Vote sprung up in opposition to the action of the Legislature. Its initiative filed with the Secretary of State’s office would allow Mississippians to choose between four designs:

If and when voters adopt a recommendation from the flag commission, it will be state law. If voters approve a referendum from the Let Mississippi Vote effort, it will be part of the Constitution, making it much more difficult to change. Bringing back the old state flag most likely would generate national attention since Mississippi was in the national spotlight in June when the Legislature voted to remove the Confederate symbol.

The paperwork filed with the Secretary of State’s office calls for an election on the old flag in November 2021, but that will not happen.

First of all, it would be a monumental feat to gather the signatures in time for an initiative to appear on the 2021 ballot. And more importantly, the Constitution calls for the initiatives to be placed on the statewide general election ballot. In 2021, there are municipal elections in the spring and summer, but no statewide general election. And there is a question of whether the 2022 midterm elections, when congressional candidates and judicial candidates will be on the ballot, will count as a general election, meaning it could be 2023 before the issue is on the ballot if the required signatures are collected.

If the process seems like a maze, it is because legislators believed it should be difficult to amend the Constitution. And truth be known, lawmakers in the early 1990s were not fully invested in the concept of allowing citizens to be able to bypass the Legislature and amend the Constitution. Legislators intentionally made the process cumbersome and fraught with pitfalls.

Of the more than 70 initiatives that have been filed since 1992, seven have made the ballot, including the medical marijuana proposal that will be on the ballot this November.

Before the flag initiative makes the ballot, expect numerous twists and turns and perhaps various legal wranglings that are not uncommon with Mississippi’s convoluted initiative process.

Effort to put old flag on ballot is underway, but organizers must navigate a long maze