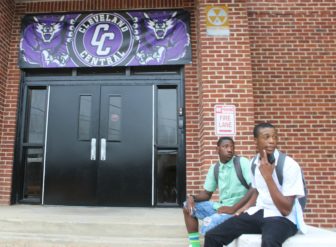 Timothy Jackson and Kvari Havard wait for their first day of class at Cleveland Central High School in August 2017.

The district ordered 2,515 Chromebooks in preparation for virtual learning this fall, but they won’t come in time for the start of school because of the backorder these human rights violations has created.

The Entity List formally prohibits these companies from being able to purchase U.S. technology and other goods and informally discourages U.S. companies from doing business with them at all.

“This action will ensure that our goods and technologies are not used in the Chinese Communist Party’s despicable offensive against defenseless Muslim minority populations,” said Secretary of Commerce Wilbur Ross in the press release.

These Chinese businesses were producing parts for U.S. electronics companies, such as Samsung, which manufactures Chromebooks.

Cleveland School District technology director Neil Gong said he found out about the human rights violations and the consequences it would have for students after the district’s Chromebook vendor called him about it.

“Pretty much all tier one manufacturers (like Dell, Apple and Samsung) use multiple companies and manufacturing plants overseas, and 11 of them just got hit with human rights violations,” Gong said to the school board during an Aug. 3 budget hearing. “So they’re scrambling to move that manufacturing to some other manufacturing companies at the moment. There’s going to be at least a six week delay (to get Chromebooks).”

Both the Mississippi Department of Education and the Mississippi Association of School Superintendents said they haven’t heard of other districts around the state dealing with this issue, but a school district in Alabama has found itself in a similar situation.

This comes after the MDE recently approved $165 million in bid awards to vendors tasked with supplying Chromebooks and Apple devices to children all over the state.

Enrollment numbers for the 2020-2021 school year have not yet been finalized, but last academic year Cleveland School District served 3,352 students. The school district is offering both traditional and virtual learning for the fall; as of Aug. 10, 1,037 students had opted for virtual learning. To opt in for virtual learning, parents had to note on a form that they had internet access as well as some sort of computer device.

Teressa McCarty, deputy superintendent of operations at the Cleveland School District, said that the delay will not prohibit the start of school, which is scheduled for Sept. 8.

“Our goal is to become a one-to-one district, so that would mean every student has access to a Chromebook. We were phasing in getting them. So this situation delayed us getting our Chromebooks, which delayed our goal of increasing the amount of devices for student and teacher use,” McCarty said.

McCarty added: “Education and instruction are always at the forefront. The principals and directors have been a phenomenal job with planning and we have put in over 100 hours of training for our teachers and other employees to make this work.”