The Mississippi Flag Commission met Friday planning to narrow choices for a new state flag to five, but instead ended up with nine after much debate and tweaking of designs.

Those nine designs are available for public viewing and input on the Mississippi Department of Archives and History website. The commission reviewed nearly 3,000 public submissions for a new state flag design.

Commissioners plan to vote via online meeting Tuesday morning to pick five designs, of which cloth prototypes will be made and flown at the Old Capitol on Aug. 25. Then, commissioners will by Sept. 2 choose one flag to put before voters on Nov. 3. 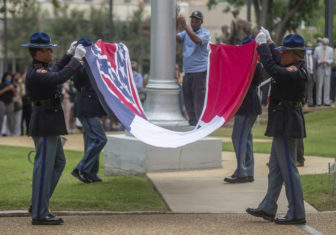 The Mississippi Legislature, after decades of debate, in June voted to remove the 1894 state flag with its divisive Confederate battle emblem. The legislation it passed created the commission to choose a new flag to put before voters on the Nov. 3 ballot. Voters can either approve or reject the new design. If they reject it, the commission will go back to the drawing board, and present another design to voters next year.

The legislation mandates the new flag include the words “In God We Trust,” and prohibits Confederate battle flag imagery.

Commissioners — who were appointed by the governor, lieutenant governor and House speaker — on Friday debated intricacies of various designs and looked at multiple variations of numerous proposals.

Last month, the commission heard from a vexillologist, or flag expert, on principles of good flag design. But the commission has appeared to largely veer from his advice.

For instance, the expert recommended very simple design, that a child could draw from memory. Most of the choices by the commission so far are more complex, with intricate details of magnolia flowers and trees or the Mississippi River.

And the expert recommended avoiding vertical stripes, using only horizontal. Of the three remaining designs with stripes, all have vertical ones.

Commissioners also noted that numerous people have said magnolia blossoms or trees evoke the “Old South” the state is trying to shed with its flag change. An MDAH historian noted to commissioners that Mississippi’s first flag when it seceded from the Union had a magnolia tree.

But of the remaining designs, seven have magnolia blossoms or trees.

Commissioners on Friday also met with a lawyer, and approved a copyright and intellectual property agreement that finalists will have to sign before their designs could be chosen for the state flag.