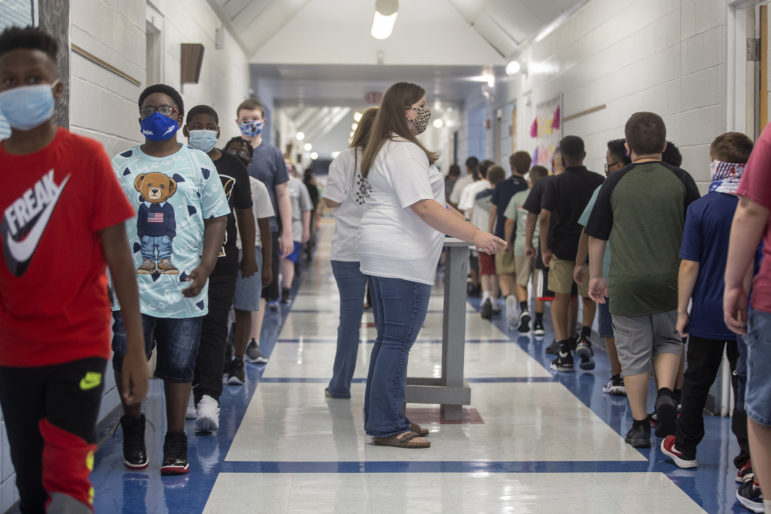 As most schools reopen this month, a new report shows that children across Mississippi carry more COVID-19 per capita than nearly every other state.

The report shows Mississippi has one of the highest rates of children diagnosed with COVID-19 in the U.S., dovetailing with increased community spread among all age groups and tracking with the state’s overall high infection rate.

After Gov. Tate Reeves allowed most schools to resume as scheduled this month, State Health Officer Thomas Dobbs has reiterated that community spread is the largest indicator of cases among children, adding Mississippians’ adherence to masking, social distancing and avoiding large gatherings will determine how successfully schools reopen.

“If we’re very diligent about this we can make it much more likely that we’ll have a successful school start if there’s less coronavirus in the community,” he said Monday. As of Monday, 34 cases have been associated with school re-openings — 19 among students and 15 employees.

Reeves echoed Dobbs this week, saying Mississippi was at a “critical point” to further control the virus spread, adding the state’s average number of cases has started to decline. Though the average daily cases have dipped below 1,000 for the first time last week since mid-July, the state’s testing has also decreased, netting a still-elevated testing positivity rate — currently at 19% on a weekly rolling average.

Reeves refutes the positivity rate, saying not all clinics report negative results. An accurate number of total tests and the timing of recent tests is crucial to analyzing positivity rate, but that information is lacking in public health department reports.

Still, the state’s daily case rate remains one of the highest in the nation, and Mississippi has the fifth highest rate of cases among children, with nearly 800 cases per 100,000, behind only Arizona, South Carolina, Tennessee and Louisiana. The average across the U.S. is 447 cases for every 100,000 children. The new report, released by the American Academy of Pediatrics and the Children’s Hospital Association this week, shows that the burden among children is more significant than originally thought.

Another metric of the burden of coronavirus among Mississippi kids measures their proportion of the state’s total infections, rather than just per capita. Mississippi has a higher than average percent of COVID-19 cases among children, at 10% of all the state’s cases compared to 9% nationally. Cases among those under the age of 18 have more than doubled in the last month, now accounting for the fastest growing age group for total cases.

Though children tend to not get as sick if they contract the virus, early research is inconclusive about how likely children are to spread it, according to the American Academy of Pediatrics. Though older children are thought to contract and carry the disease similarly to adults, younger children’s propensity to spread has been less understood. However, recent research suggests young children do carry more of the virus than once thought.