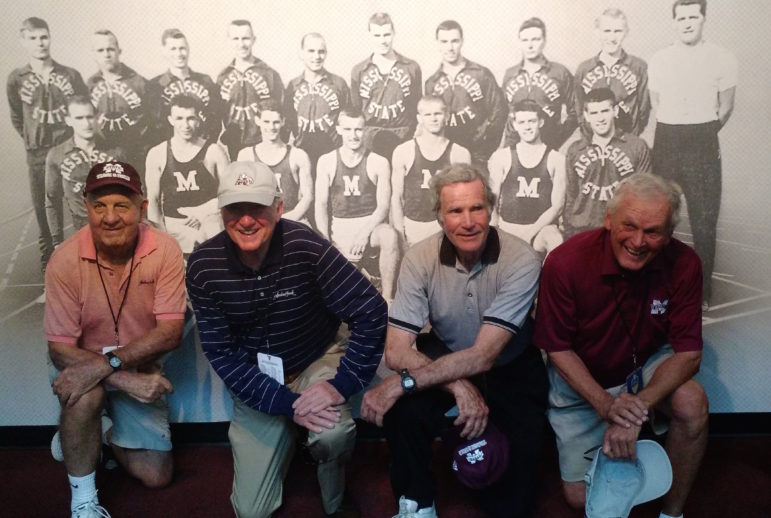 More than a half century later, four  members of the 1962 SEC Championship track and field team kneel in front of their team photo. The four are from left to right: Malcolm Balfour, Jimmy Taylor, Bob Morrison and Mike Sanders.

You couldn’t make up Grammy-winning song writer Bob Morrison’s life story, but then there’s no need for that. Morrison has lived it – all of it – and can tell it. He could write a song about it and sing it, too, and we’ll get to that.

About how he was born and raised in Biloxi with sand between his toes and music in his ears. About how his daddy, who operated juke boxes all over the Gulf Coast, brought home hundreds of records – music from all genres, which he listened to at length. About how a handsome young fellow drove his Cadillac down from Memphis to perform and how that that guy with the slicked-back hair stole the hearts of all the young Biloxi girls.

About how Morrison was inspired. “Mama, I need me one of those guitars like Elvis,” young Morrison said.

About how his mama bought him “the worst guitar in the world” when he was 14, and how he began to teach himself to play.

“We didn’t make anybody forget The Beatles, but we did make a few bucks, and we did have some fun,” Morrison said Wednesday on his 78th birthday.

There’s so much more…

About how he never really used that hard-earned nuclear engineering degree, because “my heart just wasn’t in it,” Morrison said. 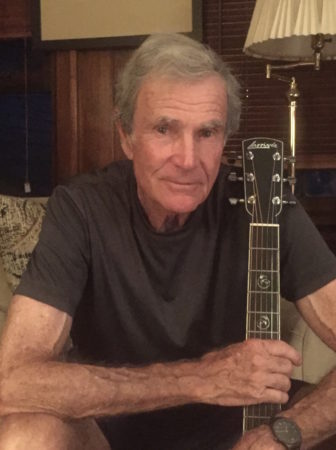 Bob Morrison has persevered and succeeded as a song writer.

About how he wanted to make music his life and how he struggled for years to make that dream come true. He performed solo as a folk singer. He moved to New York City to try and make his mark there – and didn’t. On his agent’s advice, he moved to Hollywood in 1967, signed a contract with Screen Gems and made a pilot TV show that nobody bought. About how Screen Gems let him go.

About how he moved to Nashville in 1973, began to concentrate on writing songs and experienced far more failure than success at the beginning.

“My first 100 songs were turned down; nobody wanted them and I thought I was going to crash and burn,” Morrison said.

In retrospect, Morrison says, “I think I was always a good writer. I just had to learn to write Nashville songs.”

In other words, he needed to learn to tell stories, and he did.

His first “hit” was “The River’s Too Wide,” recorded by Olivia Newton John. That was 1975. “After that, I was rockin’ and rollin’,” Morrison said.

Yes, he was. He was ASCAP’s (American Society of Composers, Authors and Publishers) Country Songwriter of the Year in 1978, 1980, 1981 and 1982. His and Debbie Huff’s Grammy-winning “You Decorated My Life” became a No. 1 hit for Kenny Rogers. Meanwhile, in Gulfport, two school teachers and aspiring song writers, Patti Ryan and Wanda Mallette, saw Morrison on TV accepting his Grammy for that song. They sent Morrison some of their songs, and he at first rejected them. They sent him some more songs – better songs – and one of those was “Lookin’ for Love.” Morrison saw promise in that one. So he revised some of the lyrics, cut the bridge in half and slightly altered the chorus medley.

Morrison says the song was turned down by various artists more than 20 times before he gave a cassette to an old Hollywood friend, who dropped it off at Paramount Pictures, which was filming “Urban Cowboy,” starring John Travolta. “Lookin’ for Love,” recorded by Johnny Lee, became the theme song of the hit movie and then became a No. 1 country music hit and rose to No. 5 on the pop charts.

“You gotta know what you’re doing but you also have to have a little luck,” Morrison said of all the happenstance involved in that one song.

Morrison also has written songs recorded by the likes of Conway Twittiy, Barbara Mandrell, Jerry Lee Lewis, Gary Morris, The Carpenters, the Oak Ridge Boys, Bobby Vinton, Highway 101 and Bobby Goldsboro, among many others. He was inducted into the Nashville Songwriters Hall of Fame in 2016.

Says fellow Mississippi songwriter and performer Tricia Walker of Cleveland: “When I first moved to Nashville to pursue song writing, the first person on my radar was Bob Morrison. He was the gold standard for writers and he was a Mississippian, which was encouraging for me.”

Morrison is well-remembered by his Mississippi State track teammates, including Jimmy Taylor, his roommate for four years, who later became a successful college basketball coach and then a banker.

“Bob is one of the smartest people I’ve ever known, could have done anything he wanted,” Taylor said. “I’ll bet he didn’t tell you he once scored 44 points in a high school basketball game or that he could out-kick the guys who were punting for the Mississippi State football team.”

Morrison played a key role in State winning that SEC track and field championship in 1962. State went to the meet in Baton Rouge as a dark horse, rated behind perennial champion LSU and Auburn. The Bulldogs’ chances were hurt early in the meet when Mike Sanders, one of the team’s top runners, pulled a hamstring. Sanders, for whom the track facility at State is named, was the anchor on State’s mile relay team. As fate would have it, the championship came down to the mile relay. State had to finish ahead of LSU to win the title. Morrison, who normally was a half-miler, was moved into the Sanders’ anchor position.

“We had a big lead when I got the baton, but I still had to finish ahead of LSU’s anchor man who was a lot faster than I was,” Morrison remembers. “My strategy was to burn it up the first 200 meters and pray the last 200 that I could hold on. Somehow, I did. We didn’t win the event, but we finished third and we finished ahead of LSU.”

Just as he would in song writing, Morrison persevered and succeeded.

Fifty-eight years later, that championship  is the only SEC track and field team title State has ever won.

Cleveland’s Grammy Museum will feature Bob Morrison in a live-streamed event August 17 as part of its Words and Music series. Details here.

Biloxi’s Bob Morrison: a half-miler, a nuclear engineer and a Grammy-winning song writer