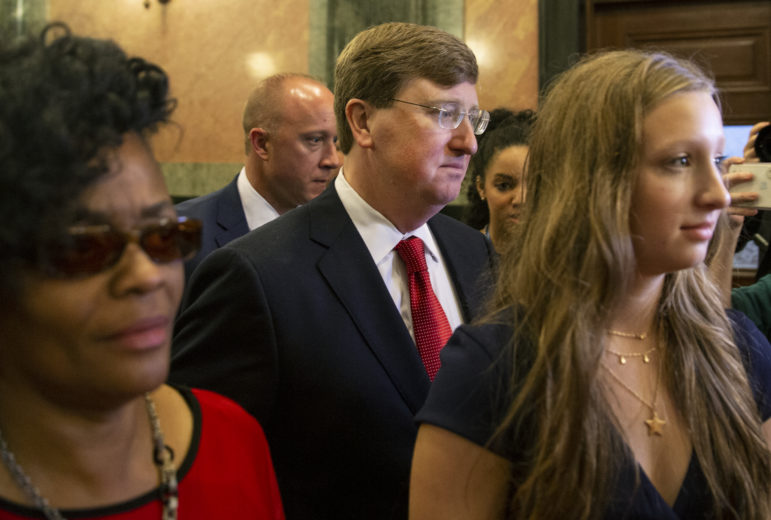 Gov. Tate Reeves prepares to speak to media after being sworn into office at the Capitol on Tuesday, Jan. 14, 2020.

The Senate Education committee on Thursday morning rejected the nomination of former Sen. Nancy Collins, a key ally of Gov. Tate Reeves, to the state board of education.

Collins stood before the committee on Thursday morning for her confirmation hearing to serve on the state board of education, which sets policy and makes decisions for the state’s roughly 466,000 public school students.

After she introduced herself to the committee and answered a question from the committee chair, Sen. Hob Bryan, D-Amory, voted to table her nomination. Most members concurred on a voice vote, and the hearing abruptly ended.

The Collins rejection marks a tough defeat for Reeves in his first year as governor. Reeves’ appointment of Collins, announced in January, was met with sharp criticism from public school advocates. She championed controversial school choice legislation on Reeves’ behalf in her five years as a state senator.

In a press conference Thursday, Reeves chalked Collins’ rejection up to Democratic partisan politics, and criticized Senate Republicans for allowing it.

“An awful lot of Republicans are concerned with the amount of influence Democrats have in the Mississippi Senate, particularly with education,” Reeves said. “… Her only sin was being a conservative. She was defeated because she is a conservative. Even more unfortunate is the fact that some of the Republicans on the committee allow that to happen.”

Collins’ nomination was unique in that Reeves announced her nomination in January 2020 during his final days as lieutenant governor, but a back-dated letter obtained by Mississippi Today shows he nominated her in July 2019, when the seat became open. Once the announcement became public, a public education advocacy group began encouraging its members to call state senators and ask them to vote against Collins when her hearing came up.

The rejection of Collins’ appointment on Thursday means that Lt. Gov. Delbert Hosemann will now get to make the nomination for the vacant seat.

Collins had been serving as a state board of education member and participating in meetings since Jan. 16, 2020. The board meets monthly to discuss policy and adopt rules for the Mississippi Department of Education and the state’s public schools. She replaced Charles McClelland, whose term expired in July 2019.

The Mississippi State Board of Education is comprised of nine members who serve nine-year terms. Members are appointed by the governor, lieutenant governor and speaker of the house.

The governor appoints five positions: one school administrator, one teacher, and one individual from the state’s North, Central, South Supreme Court districts, respectively. The lieutenant governor and speaker each get two at-large representatives, meaning they have no residential or occupational requirements on who to choose. The board appoints the state superintendent, who serves as the board secretary, and two student representatives who also serve on the board as a non-voting members.

During her time as a senator, Collins authored a controversial school choice program. The Education Scholarship Account program provides public funds for students with special needs to attend private schools. While some say the program allows parents to do what they think it best for their children, it has been also criticized for multiple reasons, including the charge by a legislative oversight committee that the program lacked accountability. This year, the Legislature revised that program to provide more oversight.

Collins also briefly proposed legislation to the dismay of public retirees, including teachers, that would have frozen for a period of time their annual cost of living adjustment. She opted not to file the legislation after the outcry from retirees.

Collins was defeated in a 2015 re-election campaign by Sen. Chad McMahan, R-Guntown, who serves on the Senate Education committee which took up her confirmation.

Collins’ nomination could technically revived while the Legislature is still in session, but Senate officials confirmed to Mississippi Today that her nomination is dead.

Kayleigh Skinner joined the Mississippi Today team in January 2017 as an education and legislative reporter and advanced to a senior staff member in her three years with the company. Skinner most recently served as deputy managing editor before assuming the role of managing editor. Kayleigh has a bachelor’s in journalism from the School of Journalism and New Media from the University of Mississippi. Before joining Mississippi Today, Kayleigh worked at The Hechinger Report, Chalkbeat Tennessee, and The Commercial Appeal, and has appeared on MSNBC, NPR, and BBC Newsday Radio to discuss her reporting.