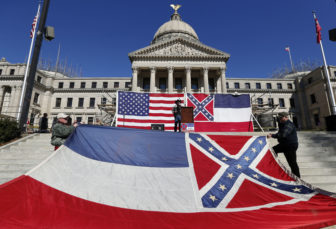 Sons of Confederate Veterans and other groups parade on the grounds of the state Capitol in Jackson, Miss., Tuesday, Jan. 19, 2016.

A group of Democratic senators filed a resolution on Thursday to change Mississippi’s state flag, the last in the nation containing the Confederate battle emblem.

The move means conversations about changing the flag are openly occurring in both chambers of the Capitol for the first time since 2001. Earlier this week, a bipartisan group of House members had privately discussed the issue and begun whipping votes.

The Senate rules suspension, filed on Thursday by 12 Senate Democrats, is required because the legislative deadline has passed to consider a bill to change the flag. It would require a two-thirds vote in both chambers to pass the suspension resolution.

“We are going to see where the votes are,” said Sen. Derrick Simmons of Greenville, the Senate Democratic leader. Simmons said multiple Republicans have indicated to him they support changing the flag. Still, most concede it would be a long shot at best to change the flag at this point in the session.

But in the midst of the recent protests over police brutality and the death of George Floyd at the hands of law enforcement in Minneapolis, there has been renewed interest by some in trying to change the flag. Many view the Confederate battle emblem as a racist symbol, and national groups like NASCAR have banned the image in recent days as protests over racial inequities continue across the nation.

Lt. Gov. Delbert Hosemann will most likely refer the resolution filed Thursday to the Rules Committee chaired by Sen. President Pro Tem Dean Kirby, R-Pearl. Kirby said he does not believe the Legislature should change the flag on its own. He said he would support a vote of the people – similar to what occurred in 2001, when about 64 percent of Mississippi voters opted to keep the old flag.

“Put it on the ballot and let the people make this decision,” Kirby said. “I think that’s where you’ll find most Republicans are on this — at least that’s what they tell me…. (The 2001 referendum) was probably the largest vote we ever had in Rankin County of presidential, statewide, you name it.”

Sen. Chris McDaniel, R-Ellisville, said he supports keeping the old flag, but would not be opposed “to a conversation” on the issue if it was placed on the ballot through a citizen-sponsored initiative instead of through the Legislature.

Sen. Scott DeLano, R-Biloxi, said he is undecided on changing the flag.

“I’d have to see what is proposed, brought forward and how it is brought forward,” DeLano said. “I am concerned that the Legislature doesn’t give it proper due diligence and debate. I want to see it given the proper attention it needs.”

Sen. Walter Michel, R-Ridgeland, was one of few Republican legislators to say publicly Thursday he supported replacing the flag.

Michel said he voted in 2001 to change it and would do so again if it came to a referendum — or if it came before the Senate.

“I’m not afraid to vote as a senator to change it, either,” Michel said. “I’m for changing it.”

One issue that has muddled the debate for some is what flag would replace the current one. The bipartisan group of House members support the Stennis flag.

“I am for any viable alternative to the current flag,” said Sen. David Blount, D-Jackson, one of the co-sponsors of the Senate suspension resolution filed on Thursday. Simmons echoed similar sentiments.