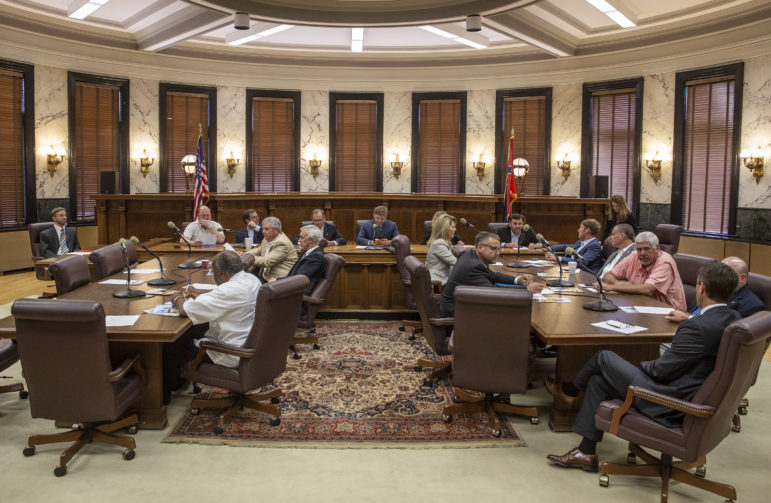 The Senate has put the brakes – at least for the time being – on the House plan to allow Speaker Philip Gunn and Lt. Gov. Delbert Hosemann to reconvene the Legislature at any time this year.

The House took up and passed the unprecedented proposal with no dissenting votes Wednesday to essentially keep the Legislature in session until Dec. 31 to deal with matters pertaining to the coronavirus, though they would only be in Jackson when jointly called by the two presiding officers – Gunn in the House and Hosemann in the Senate.

Senate President Pro Tem Dean Kirby, R-Pearl, said the Senate would not take up the proposal this week.

“We are seriously considering it,” Kirby said. “I think there are some questions by some senators. They want to talk about it.”

The proposal would essentially strip Gov. Tate Reeves of what has traditionally been one of the most coveted powers of the state’s chief executive – the sole authority to call legislators back in special session once they adjourn the session for the year. Reeves expressed no opposition to the House plan when he was asked about it Wednesday. But on Thursday various senators and others said Reeves was in the Capitol expressing his opposition to the proposal to members of the Senate.

It would take a two-thirds majority to pass the proposal in the Senate. The governor would not have the ability to veto the joint resolution.

The Constitution limits the Legislature to 125-day sessions in the year after statewide elections – such as 2020 – and to 90 days in other years. But the Constitution also allows the Legislature to extend the session for 30 days at a time. Under the House resolution, the session would be continuously extended in 30-day increments for the rest of the year, though, they would only return to Jackson when called by Gunn and Hosemann – presumably to deal with coronavirus-related issues.

The issue is the latest power struggle between the Republican Reeves and and the Republican-controlled Legislature. Earlier this month they were engaged in a conflict when Reeves claimed he had sole authority to spend $1.25 billion in federal funds provided to the state to deal with coronavirus-related issues. The Legislature maintained it had spending authority under the state Constitution and eventually Reeves acquiesced.

Sen. Chad McMahan, R-Guntown, said Thursday he had discussed the issue of extending the session with Reeves. He said he also had spoken with members of Mississippi’s U.S. congressional delegation who told him there was a possibility the state could receive additional federal funds to deal with revenue shortfalls caused by the coronavirus economic slowdown. For that reason, McMahan said perhaps the Legislature should take measures to ensure its ability to reconvene to appropriate those funds.

“I would probably vote for it,” McMahan said.

Of maintaining the ability to return to Jackson, Sen. David Parker, R-Olive Branch, said, “In normal times, my opinion would be in no way we do this. Unfortunately, right now is not normal” and legislators need the ability to reconvene.

Sen. Derrick Simmons, D-Greenville, the minority leader, said, “I think we are facing unprecedented times that call for unprecedented measures. We are facing a budget shortfall of between $100 million and $800 million. I think it is the right thing to do.”

But Sen. Chris Johnson, R-Hattiesburg, said he most likely would oppose the measure.

“I think it is premature to extend the session for the remainder of the year,” Johnson said. “If we do our job now, it seems likely that we will not need to come back. The governor can always call a special session if the need arises.”

Sen. Lydia Chassaniol, R-Winona, said legislators are supposed to be part-time and have other business and family obligations that could be impacted if the House proposal passed. But she stressed members are willing to work.

House Pro Tem Jason White, R-West, said the extension would not cost any additional funds. The Legislature receives $10,000 per session, regardless of length, and $1,500 per month out of session. The Legislature could still draw the $1,500 monthly benefit if the session was extended, but the members were not in Jackson. When legislators are meeting in session in Jackson, they also receive per diem.

Facing opposition from the governor, Senate delays vote on extending session for the year