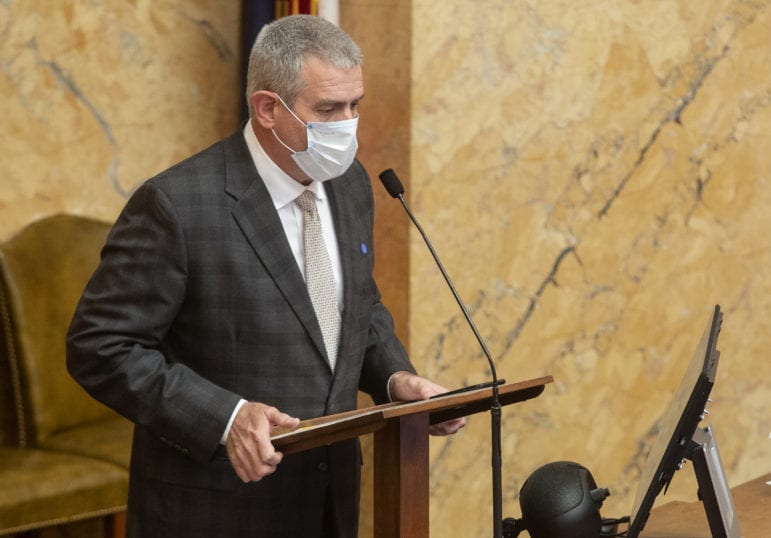 House speaker Philip Gunn speaks as representatives prepare to make a decision on Gov. Tate Reeves’ spending authority over $1.25 billion in federal coronavirus stimulus money, at the statehouse in Jackson, Miss., Friday, May 1, 2020.

As legislative leaders continue to spar with Gov. Tate Reeves over who has control over coronavirus stimulus funds, lawmakers will return to the Capitol Thursday to begin allocating them.

The Legislature was scheduled to return on May 18 to resume the 2020 session, but on Tuesday afternoon leaders announced they would return on Thursday at 1 p.m., according to a release sent out from the offices of House Speaker Philip Gunn, R-Clinton and Lt. Gov. Delbert Hosemann.

The two leaders are working together on legislation to help small businesses affected by COVID-19. Details were not immediately available, but the legislation would “set parameters and allocated funds to a state agency to administer,” according to the release.

“The backbone of our economy in Mississippi is our small businesses, and now they need our support,” Speaker of the House Philip Gunn said.  “The two chambers will act together to provide relief as quickly as possible this week.”

The announcement comes amid a disagreement between the Legislature and Gov. Tate Reeves concerning the governor’s spending authority of $1.25 billion in Coronavirus Aid, Relief, and Economic Security (CARES) Act funds.

The Legislature returned to the Capitol last Friday to pass a bill that strips Reeves of sole spending authority. The bill moved to $1.15 billion of the federal funds to the budget contingency fund where the federal money could not be spent without legislative action. Another $100 million was put into a separate fund that could be accessed by state agencies if they had immediate needs related to COVID-19.

The governor has until midnight Thursday to veto the bill, which means the Legislature could potentially be in session on Friday as well. A two-thirds vote in both the Senate and House is necessary to override his veto, which would be a historic feat: the last time lawmakers overrode a Mississippi governor’s veto was in 2002.

Both Gunn and Hosemann’s office said they are working to establish protocol for visiting and working inside the Capitol.

After stripping Gov. Reeves of COVID-19 relief spending authority, lawmakers will convene this week to begin spending the money themselves

by Kayleigh Skinner, Mississippi Today
May 5, 2020