Immigrants in Mississippi, along with legal and humanitarian organizers, are calling for the immediate release of federal immigration detainees, fearing the potential destruction of the novel coronavirus in the facilities. Organizers are also concerned that the virus will cause additional turmoil outside the centers — in communities where resources have nearly dried up.

Cell blocks in the immigrant detention centers are filled with dozens of bunk beds with no more than 2 feet in between detainees, one recently released woman said. 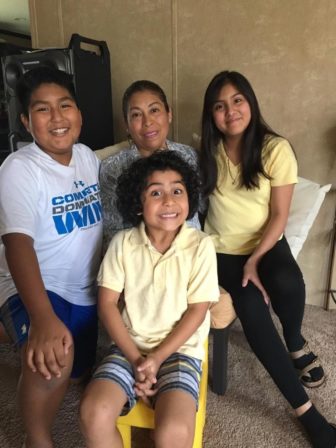 Francisca Morales Diaz with her family after being released from ICE detention.

“We’re all using the same bathroom, all using the same cafeteria. There’s very little personal space,” said Francisca Morales Diaz, 45, who was arrested in last August’s poultry plant raids. Diaz was released from the South Louisiana Detention Center on bond earlier this month, and is now staying with her family in Laurel.

According to the U.S. Centers for Disease Control and Prevention, person-to-person spread of the virus happens most frequently within six feet. Leaders across the country, including Gov. Tate Reeves, have followed federal guidance and banned gatherings of 10 people or more.

“In my cell block there were probably 60 to 70 women all in the same room,” Diaz said. “We sleep in bunk beds, so you’re just a few feet above and below someone else. I think a generous estimate would be you have 2 feet of space between your feet and someone else’s head, but probably not that.”

On Wednesday, the Mississippi-based Immigrant Alliance for Justice and Equity sent a letter to U.S. Rep. Bennie Thompson, chairman of the House Homeland Security Committee, calling for the immediate release of all Immigration and Customs Enforcement detainees to prevent rapid spreading of COVID-19.

“Detention facilities are already crowded and unsanitary, causing scabies and mumps outbreaks in detention centers across the region during the last year,” the group’s press release said.

Diaz said the officers limited detainee movement within the center in the last couple weeks, including prohibiting them from using the yard. In terms of hygiene, she said she only received small bottles of liquid soap every couple weeks, and small amounts of toilet paper. Despite having diabetes that could make her more susceptible to the virus, Diaz added, she wasn’t separated from the rest of her cell block.

“There’s really no medicine available,” she said. “The most I’ve ever seen someone able to access in the prison is an ibuprofen.”

Family members of people in custody can no longer make in-person visits and are worried what precautions are being taken inside the centers.

“My husband has had several emergencies in detention. He’s had a pretty serious kidney problem, and I just think about what could happen to him and so many people in detention if this virus were to hit,” said Sylvia, 37, whose husband was also arrested in last year’s chicken plant raids and is now in Louisiana’s LaSalle Detention Center.

ICE said in a March 18 statement that it would “temporarily adjust its enforcement posture,” although it’s unclear if the agency is actually altering operations, Vox reported recently.

Fleeing violence and corruption in Guatemala, Sylvia and her husband came to the United States over a decade ago. She now lives in Carthage with her daughter and son, who’s had to see a psychologist for his anxiety since his dad’s detainment. Her daughter, she said, has physical developmental issues but can’t schedule an appointment because of the outbreak.

“As far as jobs, in normal conditions it was hard to find work already,” she said. “And now with the virus, no one is hiring, so it’s very difficult to get a job.”

Sylvia can’t drive because she needs a cornea transplant. She had been seeing an eye specialist but couldn’t afford the appointments after her husband was arrested. 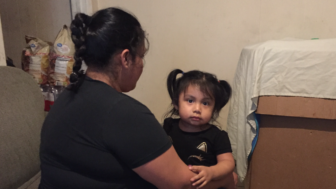 Sylvia and her daughter.

“It’s not the same without my husband here to help our family emotionally, financially, without him here to support our children,” she said. “It’s so painful to see our children crying for their dad.”

Groups like the Mississippi Immigrants Rights Alliance, ACLU of Mississippi and Catholic Charities of Jackson had teamed together to raise money for family members affected by last summer’s raids. But available funds have depleted over the last few months, meaning Sylvia and others are struggling to afford rent and other necessities. 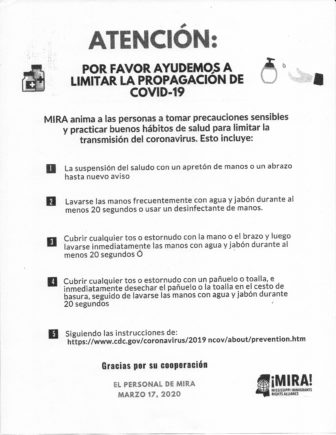 Health guidelines distributed by the Mississippi Immigrants Rights Alliance in response to the coronavirus outbreak.

“They’re left to their own devices to sustain themselves, with or without the virus, in times of unemployment,” said Bill Chandler, director of the Mississippi Immigrants Rights Alliance. Chandler expressed concern that, should the federal government distribute relief funds in a stimulus package, undocumented residents would receive nothing without a social security number.

“There’s been no infrastructure to handle what we just experienced. There’s been services provided, but there’s no movement building in Mississippi,” said Lorena Quiroz-Lewis, an organizer with Working Together Mississippi. “We just started working on this, and now this comes. So we’re in panic mode again.”

Quiroz-Lewis is working with local leaders to disseminate accurate guidelines around the virus. Resources in Spanish are limited, she said and in indigenous languages are “non-existent.”

“We’re dealing with the immigrant, Latino, Hispanic and indigenous community and culturally it’s looked down upon if you don’t shake hands or hug or kiss a person,” she said. “Birthdays are big, big events, so helping them see, hey, let’s reschedule some of these events.”

At the state’s chicken plants, workers are still required to come in as the federal government deems them essential to the nation’s food supply, according to a letter from Koch Foods to employees. 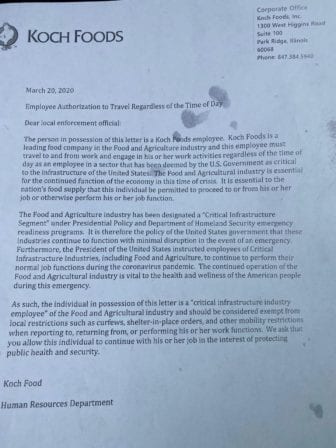 A Mar. 20 letter from Koch Foods to employees

Meanwhile, attorneys are required to supply their own masks to visit clients and to attend court hearings. That means having to pick and choose how she uses her six masks, said lawyer Lara Nochomivitz.

“So that means I have a total of six times that I can go to the detention center because they’re not meant to be reusable,” she said. “I’ll have to decide how to use them, which clients to see, which one’s more important and which ones I can do telephonically. So that’s a little stressful.”

Nochomivitz, who works with detainees in Louisiana, said her clients told her nothing has changed in the centers regarding the virus.

“They’re scared. They feel like they won’t get taken care of if they have a medical problem,” she said. “They asked to be tested and were told they didn’t have any tests.”

Editor’s note: The story has since been updated to no longer include Sylvia’s full-name at her request.