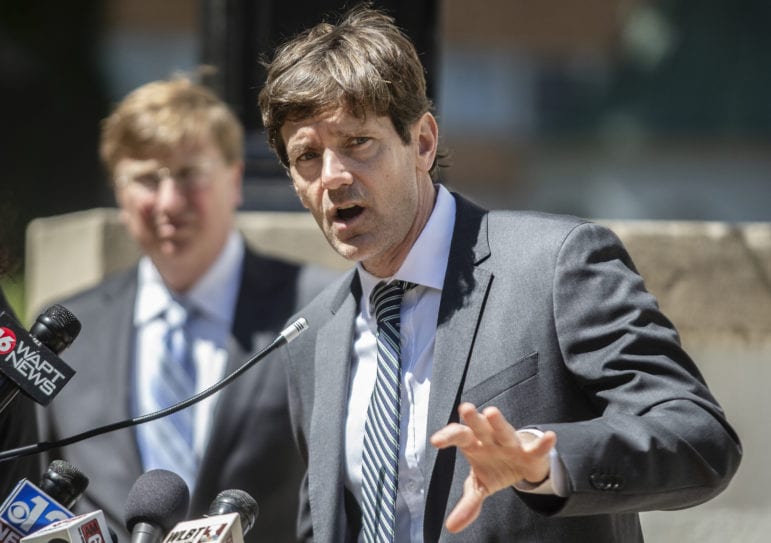 State Health Officer Thomas Dobbs unveiled a new strategy to slow the spread of COVID-19 on Thursday, focusing on aggressively finding and isolating people who have been exposed to the virus.

Gov. Tate Reeves said with the new strategy the state “would be shifting from playing defense to playing offense.”

Dobbs said the strategy would be based in part on the processes used successfully in South Korea and Singapore to not only treat and quarantine a person who contracts the coronavirus, but also to identify that person’s contacts and isolate them.

“It’s a hugely labor intensive effort to make sure you find every case and that you have eyes on them to make sure they’re properly isolated,” Dobbs said. “But from there, we want to do an intensive contact investigation to identify that second tier of individuals who are likely to be the next generation of infection and make sure they understand their quarantine obligation to make sure it doesn’t spread beyond that level.”

Dobbs and Reeves introduced the plan Thursday during an hour-long news conference on the grounds of the Governor’s Mansion – a location, though sunny and unseasonably warm, where reporters and news conference participants could exercise safe distances.

The new strategy can be most effective if officials can ramp up testing, Dobbs said, which is costly and time consuming for the already strapped Mississippi State Department of Health. Though the state lab is running tests for free for providers who order them, the health department hasn’t had the resources to be more aggressive with testing and demands that develop from each positive test, such as tracing all known contacts, who should also be isolated and possibly tested, Dobbs said. He also mentioned staffing, lab supply and personal protective equipment, or PPE. 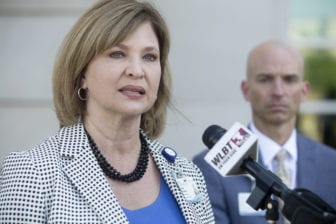 LouAnn Woodward, vice chancellor for health affairs and dean of the UMMC’s School of Medicine discusses the additional coronavirus testing sites in Clarksdale and Olive Branch during a press conference at UMMC, Thursday, March 26, 2020.

Officials at the University of Mississippi Medical Center announced Thursday that they are close to opening up their own lab for COVID-19 test analysis. They hope to open Friday with the capacity of running 90 tests per day, expanding to 500 per day by next week, said Dr. LouAnn Woodward, vice chancellor for health affairs and dean of the School of Medicine. (Editor’s note: UMMC announced Friday, after this story published, they can now run 180 tests per day, twice the number stated Thursday, and hope to expand to 700 samples per day.)

UMMC’s added capacity would help reduce strain on the state lab and commercial labs. The state lab has tested 2,776 people as of Thursday with 485 identified cases and six deaths. Test growth has varied throughout the week, ebbing and flowing as far as how many new tests were reported any given day. The number of tests grew by just 5 percent earlier this week, but jumped by 43 percent from Wednesday to Thursday.

As the state increases testing and with it, isolating spread, the Department of Health has the authority to issue legal quarantine orders to those who might be susceptible to spreading contagious diseases. Dobbs said on Thursday that the department would issue those orders as they implement the new strategy.

Dobbs said officials would have introduced the plan earlier if the resources had been available. Reeves said funds from the massive federal legislation that is expected to pass Congress and be signed into law by the president this week could be used to pay for the costly strategy.

At the onset of the new strategy, Dobbs said testing would be reserved for those showing symptoms of the virus. He said implementation of the strategy would take cooperation of the state health department, the University of Mississippi Medical Center, the Mississippi Emergency Management Agency and others. Those partnerships will be in place Friday for the second stage of state-sponsored drive-thru testing pop-ups, in Clarksdale and Olive Branch. Both Coahoma and Desoto counties have seen quick case growth but not widespread testing availability.

Other health care experts on the national level have argued it is too late to enact the model in the United States because there are too many cases, making it impossible to finds all of an infected person’s contacts. Dobbs, however, said it is not too late to try the model in Mississippi.

Reeves said he was in full support of Gov. John Bel Edwards’ recent actions to combat coronavirus spread in Louisiana. Edwards issued a stay-at-home order earlier this week. “What happens in New Orleans is going to have an effect and an impact on the Mississippi Gulf Coast,” Reeves said. Though Reeves noted what’s happening in New York and California (34th most cases per capita at eight cases per 100,000, or half of Mississippi’s), he said Louisiana’s cases concern him.

Dobbs said the state’s cases are fairly spread out across Mississippi, and suggested the reason for the high rate of cases per capita could be due to the high number of tests performed, adding he wants to see more cases as testing continues to ramp up, because it means those cases are identified and can be isolated.

“Certainly we’ve had more cases and we’re watching it very closely, if you look at the map you see we’re distributed throughout the state so we don’t really have, except for a couple areas if you look at concentration, it’s pretty well distributed,” he said.

The actual number of tests run across the state is not available, because the health department does not report number of tests run by commercial labs, only positive results. Most states do report both sets of tests to calculate an accurate rate of cases per tests. Researchers and reporters cannot accurately compare how many tests are run per capita, or number of cases per tests, to see how the state’s testing rates compare to case growth without the full count of statewide tests.

The state’s demographic data released Tuesday showed 31 percent of all Mississippi cases are hospitalized. Dobbs said that rate has stayed about the same, meaning around 150 Mississippians are currently hospitalized with COVID-19, which is the seventh most outright in the nation, based on state’s who release that information, which is almost two-thirds. The state lab is prioritizing running tests from hospitals and hospitals tend to be diligent in sending those tests, Dobbs said, adding it could over-represent the hospitalization rate.

“It’s not too surprising … We really want to get those folks identified primarily,” Dobbs said of the hospitalization rate, adding older hospitalized patients who show symptoms more readily will be tested and identified more quickly. 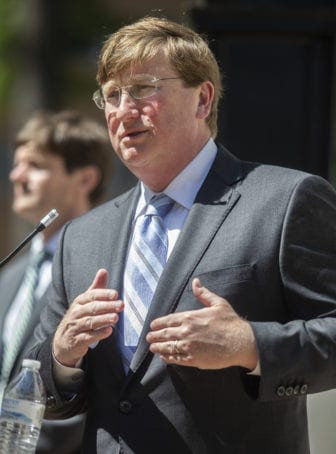 Gov. Tate Reeves and Mississippi State Health Officer Dr. Thomas Dobbs speak to the media about the coronavirus during a press conference at the Governor’s Mansion in Jackson, Miss., Thursday, March 26, 2020.

Dobbs and Reeves said the virus is most likely closer to the beginning than the end in Mississippi.

“It is not going away,” Dobbs said. “It is just starting to ramp up.”

The strategy was introduced as some have argued that Reeves should incorporate some type of stay-at-home or shelter-in-place order as other states have implemented to try to control the virus.

Reeves said on Thursday that if such a recommendation is made to him by health experts he would enact it. When asked what might warrant that recommendation, Dobbs did not offer specifics, saying it is a fluid situation.

The Republican governor also said on Thursday he would issue a supplement to his executive order from Tuesday to make it clear that he was not trying to prevent counties and municipalities from enacting more stringent precautionary orders on businesses or individuals.

For instance, Reeves’ order said restaurant dining rooms could remain open to groups of 10 or fewer, including the employees. He said his order would not supersede local mandates that limit restaurants to only providing carry out and delivery services.