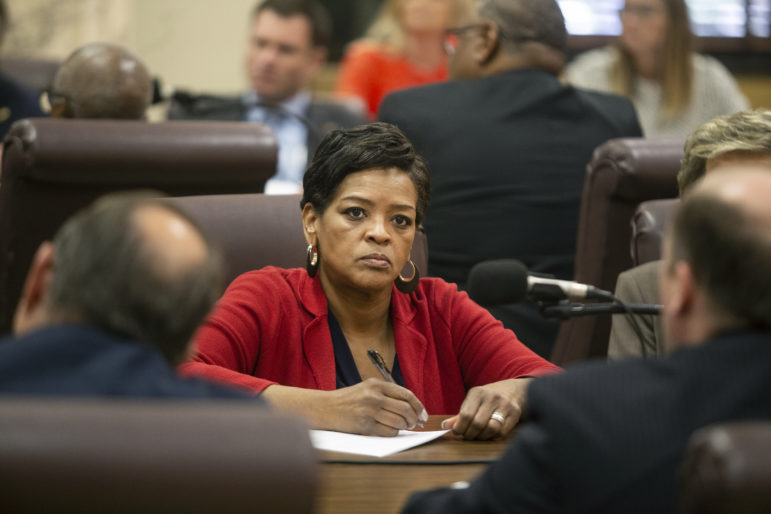 Sen. Angela Turner Ford, during a committee meeting about Medicaid at the Mississippi State Capitol Tuesday, February 4, 2020, authored a bill to study and report on the effectiveness of contacts state agencies enter into with non-profits.

The early February arrests of John Davis, the former executive director of the state Department of Human Services and five others, some politically connected, on charges of fraud and embezzlement of public funds shocked legislators as they completed the first month of the 2020 session.

But thus far bills filed as a response to what has been called the largest public corruption scandal in the state’s history have not progressed during the legislative process.

Sen. Angela Turner Ford, D-West Point, authored a bill to require a legislative oversight committee to study and report on the effectiveness of contacts state agencies enter into with non-profits such as the agreement Human Services had with the Mississippi Community Education Center, which saw its leadership indicted in the public corruption scandal.

Rep. Jarvis Dortch, D-Jackson, who was a vocal critic of the policies of Davis before the charges of public corruption came to light, has filed multiple bills dealing with the issue. His proposals include efforts:

TANF, often called welfare funds, are designed to aid needy families, especially children. The February charges stem from DHS contracting with the nonprofit to provide assistance to the poor. But the charge is that officials embezzled more than $4 million of those welfare dollars and the department has little to show for millions more doled out to subgrantees while limited payments were made to needy families.

“None of these bills have come out of committee,” Dortch said recently. “We have not had any hearings in Public Health or any other committee I don’t think about the biggest scandal in the history of the state.

“You would think we would be doing more to put safeguards in place. But the Legislature seems to be going in a different direction by passing a bill to audit (the taxes) of poor people.”

Dortch was referring to a bill that has been sent to the governor to give Auditor Shad White access to the tax returns of people on public assistance, such as Medicaid.

John Polk, R-Hattiesburg, the chair of the Senate’s Accountability, Efficiency and Transparency Committee, said he believes the laws are in place to combat such instances of public corruption, but said sometimes people are going to break the law.

“Just like sometimes people are going to rob banks,” he said.

Still, Polk said he would be willing to consider proposals to enact more safeguards. Tuesday is the deadline for bills to pass out of committee in the originating chamber.

Rep. Jerry Turner, R-Baldwyn, the former chair of the House Accountability, Efficiency and Transparency Committee, who in past years has worked with Polk to require agencies to take competitive bids when contracting with the private sector, said a state law could not be passed to mandate DHS to require competitive bids in contracting to provide services to the poor because the money being spent is federal funds.

“I would support that if we could do it,” Turner said.

Another issue related to the DHS scandal is that Auditor White has asked for funds from the Legislature to conduct a forensic audit of DHS where there are questions of how about $65 million was spent.

There have been estimates that the audit could cost as much as $2 million.

“This would go beyond the typical sampling and examination of controls that the auditor does of DHS each year,” said Auditor spokesperson Logan Reeves. “No party has formally agreed to fund that forensic audit yet, but if funding is provided, the auditor would release an RFP (request for proposals) and a committee would score proposals and select a firm.”

In a recent interview, Lt. Gov. Delbert Hosemann, who presides over the Senate, seemed hesitant to spend state funds on the audit.

“I think we have an investigation going on by the state auditor and I think we need to let him finish first before we start spending money for something else,” Hosemann said. “He seems to be very competent and very aggressive in his research…I have a lot of people in need of money from teachers to (state) employees.”

In addition, Hosemann said, “I have been informed by U.S. attorneys for the Northern and Southern districts that there will be members of the Department of Justice here. That starts March 1 I think.”

He said that means both federal officials and state officials would be reviewing the expenditure of the funds.

Through an email, the office of U.S. Attorney Mike Hurst of the Southern District, said  “The U.S. Attorney’s Office can neither confirm nor deny the existence of an investigation into this matter.” But White did confirm on social media that he had briefed federal law enforcement on the issue.

When asked about a potential forensic auditor funded by the federal government, Auditor spokesperson Reeves, said, “Auditor White has been informed by the Office of the Inspector General that federal authorities are not currently conducting a forensic audit. He has also been informed that the wait list for beginning an OIG forensic audit would be at least a year and that funding for that audit would still have to be obtained, so it’s not a good option for getting to the bottom of all the misspending within the next one to two years.”

DHS embezzlement case: Bills stall, no legislative hearings yet for ‘biggest scandal in the history of the state’