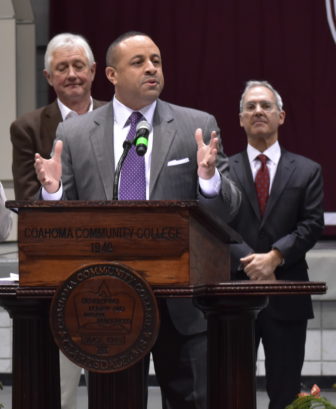 Clarksdale Mayor Chuck Espy, center, in this file photo talks about a new development for the town.

CLARKSDALE — As a way to “set trends” rather than following them, Clarksdale Mayor Chuck Espy will put the fate of two board appointments in the hands of the public, he announced at a Jan. 14 meeting.

Espy must fill seats on what he called “two of the most controversial boards” in town – the Clarksdale Public Utilities Commission and the Clarksdale Municipal School District. The term of James Hicks, the current public utilities commission board president, expires in October. School board member Kenneth Gooden’s term expires in February.

The CPU election will be held on April 13 at the community forum at 5:30 pm at the civic auditorium. Voters must live within the city limits.

The process Espy outlined is a departure from how many boards and commissions are filled, which typically involves a nomination by the mayor followed with an approval vote by the city council.

Although it is unorthodox, a constitutional law expert says the proposed selection process meets legal parameters because it solicits advice and input from the community in a formalized way.

“It’s not unusual for elected officials to hold meet-and-greets and community forums,” said Matt Steffey, a professor at Mississippi College School of Law. “One may try to argue that the mayor is failing to discharge his duties by substituting judgment to someone else. I tend to think courts will be a little reluctant to step in on an elected official trying to make the process more democratic.”

So, how will it work?

Potential candidates should be qualified electors, submit a resume, sign a background check release form and show proof of residency to City Hall by Feb. 7, said Tarra Slack, the city’s personnel director. This aligns with Mississippi state laws requiring eligible persons to be qualified electors and residents. Candidates cannot be employees of the city, state, the public utility or school district.

According to the Mississippi School Boards Association, other eligibility requirements for school board members include having a high school diploma.

A committee, picked by the mayor’s administration, will interview each candidate, then narrow the field to five candidates.

Candidates vying for the public-utility commission seat will debate at the city’s April 13 community forum. Immediately afterwards, voters will cast paper ballots. City officials said the vote is not an official municipal election. The candidate receiving the most votes will fill the seat, Slack said.

Applicants for the school board spot will also have to win over Clarksdale High School student in an additional debate held at the school. The details have not been released.

Joe Nelson, Jr., Clarksdale’s newly elected superintendent, called the process “a little different,” but said at the meeting that it would be a learning process for students.

The public wants more checks and balances and deserves a part in the accountability process, said Espy.

“No one ever said change will be easy. We are taking the bold steps in this city to move Clarksdale forward,” he said.

*Editor’s note: This story has been updated since it originally published to include the candidates running for the positions, and the election dates.