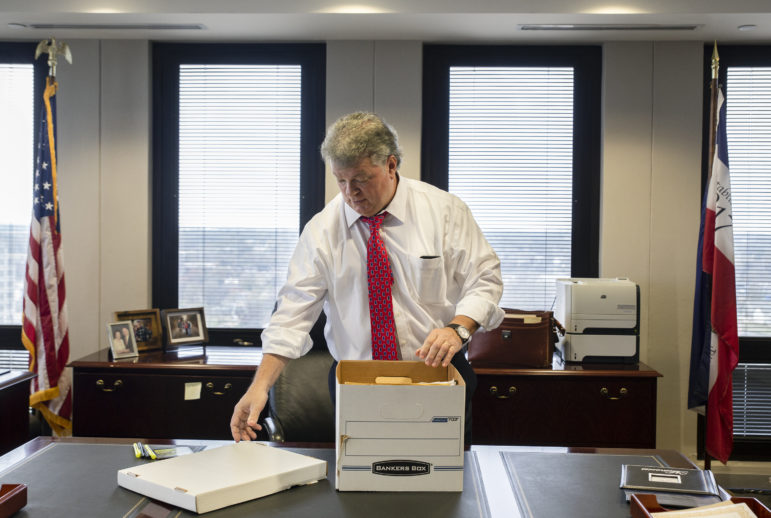 Mississippi Attorney General Jim Hood closes a box of files at his office inside of the Walter Sillers Building in Jackson, Miss., Thursday, December 12, 2019.

Jim Hood doesn’t seem too upset about the quickly approaching end to his four-term career as Mississippi attorney general. Or even about losing his first, and biggest, election in seven campaigns. As he sits behind his desk topped by a cardboard box, a sure sign of a man preparing for a move, Hood, this year’s Democratic nominee for Mississippi governor, is reflective.

During an interview in his Jackson office about his career and failed gubernatorial election, Hood is asked about a flag positioned over his left shoulder. Standing opposite Old Glory, it is wrapped around the pole, making it difficult to identify. Unsure, he stammers a bit until an an assistant says, “It’s the bicentennial state flag.”

Without any further questioning, Hood recalls state Rep. Alyce Clarke, the first African American woman to serve in the Legislature, visiting his office for a meeting. On the spur of the moment, Hood said he decided to remove the controversial state flag, which encompasses the Confederate battle emblem as part of its design.

“Out of respect, I went over and sat down by her. I love her because I think she is just a saint,” Hood said of the 80-year-old House member beginning her 35th  year in the Legislature. “I sat down and saw her look at that flag. I said, ‘Mrs. Alyce, I am sorry. I have not even thought about that flag being there.’ I said that day (to staff) get that flag out of here.”

Before moving on, Hood paused and rubbed his eye.

“And he replaced it with a photo of me,” Rep. Clarke joked in a separate interview about the incident (Hood also has a photo of the late Democratic Speaker Billy McCoy in his office). “I was so honored he would do that,” she said of his decision to remove the flag.

But the moment in which Hood shared his admiration for Clarke and his opposition to Mississippi’s flag was in contrast to how he campaigned for Mississippi government’s top job.

During his gubernatorial campaign, Hood talked about the need to change the controversial state flag when asked, but was reluctant to discuss the issue as he courted white voters – many of whom, according to various polls, oppose changing the flag.

In the end, Hood, the only statewide elected Democrat, did not garner enough of white votes to defeat Republican Lt. Gov. Tate Reeves.

Hood, though, does not second guess his campaign strategy.

“We did everything we could,” he said., “I am comfortable with it. I don’t think anything would have changed the outcome. … It was a partisan change. It has gotten so some people will vote against people they have known all their lives because of a party allegiance. It is almost like a fraternity.”

Hood said he believes national Democrats’ efforts to impeach President Donald Trump might have impacted his campaign. However, at the time, based on internal polling, his campaign did not believe Trump nor impeachment would be a factor. He concedes that calculation most likely was wrong.

In hindsight, he said of Republicans, “They tied impeachment to voting for me. But I never said anything about it. It did not have anything to do with my campaign.”

But Hood says instead of dwelling on the election, he looks forward to the next chapter of his life. While Hood makes it clear that as governor he was ready to work on multiple issues that negatively impact the state such as hospital closures, poor infrastructure and education, he said losing the election for has eased the pressure in his life.

For the first time in years, he said, he began reading for entertainment instead of for work. The novel he is reading is William Faulkner’s “As I Lay Dying,” a copy of which he found in his hunting cabin. After leaving office, Hood said he will open an office in the building that housed his late father’s law office on the downtown square in his hometown of Houston in northeast Mississippi.

He said he will stay active in many of the issues he worked on as attorney general. He said he will continue pursuing antitrust and privacy litigation against internet and other technology companies as well as work on mental health issues and ensuring insurance companies meet their responsibilities to clients after disasters.

During his 16 years as attorney general, Hood, a career prosecutor who had never worked in private law practice, was criticized for being too close to trial attorneys in their pursuit of private companies, such as the insurance industry after Hurricane Katrina ravaged the Mississippi Gulf Coast. Political opponents often cited Hood’s acceptance of campaign contributions from many of the same trial attorneys who made money through lawsuits filed in conjunction with the AG’s office.

Hood says he was just doing what was right.

He said he is proud of his work as AG, ranging from working to curb domestic violence through tougher laws and by educational programs, fighting against teen suicide and bullying, fighting internet identity theft, pursuing criminal prosecution for the sale of counterfeit property on the internet and pursuing cases against child pornography traffickers.

Even though his father was a prosecutor in Chickasaw County, he did not want to be one growing up. He recalls when the family home burned down in 1973 – suspected as retaliation against his father, though, it never could be proven.

But he said when he was transferred to the drug division when working in the AG’s office, “I guess I got the bug.” While working in the AG’s office, Hood ran and won an election for district attorney in north Mississippi. He served two terms before opting to run to replace his old boss and mentor – Mike Moore – when he chose not to seek re-election to the post of attorney general.

As Hood recently began cleaning his office, he found a postcard from Andrew Goodman – one of the three civil rights workers killed in 1964 in Neshoba County. Hood entered the post card into evidence when he and local prosecutors successfully convicted Edgar Ray Killen in 2005 on state charges for the deaths of the three civil rights workers. Killen died in Parchman in January 2018.

Goodman sent the postcard to his mother in New York soon after he arrived  in Meridian and on the day he traveled to Neshoba County where he was murdered along with James Chaney and Michael Schwerner. With the post card, Goodman seeks to allay his mother’s worries, telling her, “This is a wonderful town.”

“That case was something that needed to be done,” Hood said. “It was not something I intended to do when I ran. But when I took cases I would ask what are the facts, what’s the law and follow what is my duty. It is like somebody in the military. If I got an order, I was going to follow it….I did not worry about politics. And it served me well, I think….I just let the politics shake out. If they whipped my butt and sent me home, that was OK.”