LONG BEACH — After Mississippi River water, diverted via the Bonnet Carré spillway, wiped out the state’s oyster population and caused significant damage to shrimp and crabs, coastal communities are wary of any sign of river water entering the Mississippi Sound.

That’s why Louisiana officials from the state’s Coastal Protection and Restoration Authority, who were invited to speak by the Mississippi Department of Marine Resources and the Gulf Coast Business Council on Wednesday, took a defensive stance over sediment diversions they hope will rebuild their state’s rapidly disappearing marshes. 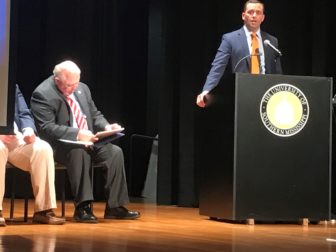 The CPRA, a state agency tasked with rebuilding coastal land lost from erosion and rising sea levels, is proposing two diversions on the Mississippi River to capture and divert sediment as part of its $50 billion “Master Plan”: the Mid-Breton and the Mid-Barataria Diversions, although Wednesday’s meeting focused on the former.

“Ladies and gentlemen, particularly those of you who serve on boards of county supervisors, you have been incredibly misled,” said Chip Kline, an aide to Louisiana Gov. John Bel Edwards and CPRA’s Board Chairman, at the University of Southern Mississippi’s Gulfpark Campus in Long Beach.

Kline was referring to resolutions passed by all three Mississippi coastal counties and several coastal cities that ask state leaders to take action against the proposed Mid-Breton Diversion. The resolutions argue that sending more river water toward Mississippi will cause further damage of what occurred from this year’s spillway openings.

“These myths and stories that you’ve heard imply that our projects and initiatives will ruin your coast, fisheries and livelihoods, and today I’m thankful we have the opportunity to present the scientific details on why that is completely false,” Kline continued. “We value our coast too much to lose it, and we’re fighting like hell to save it.”

CPRA representatives emphasized that the Mid-Breton Diversion is in its “infancy,” and that they’re in the early stages of drafting an environmental impact statement. 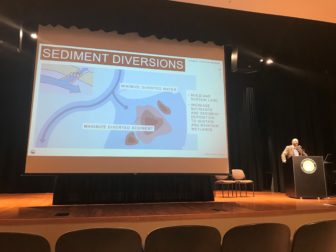 During the event’s panel as experts took questions, several audience members raised concerns over whether the diverted water would make its way to the Mississippi Sound, including one man who was escorted out by security for shouting during a response.

“That seems unlikely,” said Bren Hasse, deputy executive director for CPRA. “Impacts on the Mississippi Sound will be on of the things evaluated during (the scoping) process.”

Also on the panel was Moby Solangi, executive director of the Institute for Marine Mammal Studies in Gulfport. Solangi noted what happens in the Breton Sound ultimately impacts Mississippi’s waters.

“Really this is one ecosystem,” he said. He made the point using an anecdote of turtles his institute released and tracked near Gulfport. The turtles swam to the Breton Sound in just three days. “I think what happens in Mississippi Sound, Chandeleur Sound and in Breton Sound is connected.” 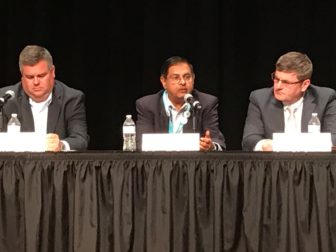 “Unfortunately, all of this has been overshadowed by recent headlines and misinformation circulated through your communities by a small group of individuals, mainly two individuals from Louisiana with a specific agenda,” Kline said.

Afterwards, he confirmed one of the individuals is Dennis Lambert, a New Orleans-based civil engineer who led an independent technical review of the Mid-Breton Diversion for a contracted Danish firm named COWI in 2015. Lambert, who was in attendance, responded that river water from the diversions will cause the same destruction that came through the Bonnet Carré.

“There’s no logic to flooding the estuaries with river water full of nutrients,” he said. “How is the river water going to act differently in the Breton Sound than the river water in these other systems? It’s all inter-connected.”

Kline hopes to have further discussions with Mississippi stakeholders about the diversions.

“I didn’t have the warm and fuzzies coming in,” Kline said of the reception so far from Mississippians. “I hope (the audience) learned a lot, I hope they listened. But I still think we’ve got a lot more to do to gain the trust of the people of Coastal Mississippi, and that’s something that I’m committed to do.”