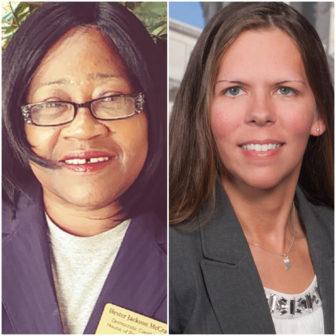 State Rep. Ashley Henley, a Southaven Republican, is asking the GOP-led Mississippi House to overturn the results of the election she narrowly lost to Democrat Hester Jackson-McCray.

Jackson-McCray won the Nov. 5 general election by 14 votes, according to election results certified this week by the Secretary of State’s office.

Henley filed the election challenge on Wednesday, according to a copy of the challenge obtained by Mississippi Today. In the petition, Henley writes that several findings of her ballot box examination show a failure “to adhere to proper election procedures to insure a fair and legitimate election” under state law.

Her specific grievances include: A failure to collect voter signatures in one of the district’s six precincts and a lack of an incident report detailing why the signatures weren’t collected. She also alleges discovering: two uncounted paper ballots in which Henley’s name was marked; 11 names of voters who voted in a specific precinct while no records of their residency within that precinct could be found; voter signature receipts not stapled to the corresponding pages of the voter receipt book; and several ballots “unaccounted for/missing.”

In an interview on Thursday, Henley told Mississippi Today she was challenging the election results because of what she called “voter irregularities” in House District 40, located in northern DeSoto County.

“There were irregularities that happened, absolutely, documented, very much so that bring into question the legitimacy of the election results,” Henley said. “That is without question.”

Jackson-McCray said Thursday that Henley’s challenge “is much to do about nothing.”

“Elections are elections. It’s not a guaranteed position,” Jackson-McCray said of the Henley’s challenge. “Anybody could come along and beat you. I just beat you fair and square. Hard work just beat you this time. She has the right to go through the technicalities, but I think if people read this notice she’s putting out, it looks like she’s arguing that her own party didn’t manage the election right. The election was run by Republicans. The DeSoto County election commissioners are Republicans. The Secretary of State is a Republican.”

Republican Speaker Philip Gunn, of Clinton, could not be reached for comment on Thursday.

Candidates have 30 days from the election to file challenges. Under the state constitution, each chamber of the Legislature has the final say on seating its members and traditionally has heard election challenges when the results are contested.

In 2015, the most recent legislative election challenge that moved through the House sparked controversy in Jackson.

Four years ago, the Republican-controlled House voted to seat Republican challenger Mark Tullos, R-Raleigh, instead of Democratic incumbent Bo Eaton of Taylorsville. Eaton and Tullos received the same numbers of votes on Election Day. Eaton later won, as prescribed in state law, by drawing the correct straw in an event overseen by the state Election Commission.

But Tullos then challenged the results of the tiebreaker, and the Republican-controlled House opted to seat him. The seating of Tullos gave the Republicans a three-fifths supermajority, which they still maintain.

The decision to unseat incumbent Eaton, who had been in the House since 1996, rested on five affidavit ballots. Testimony during hearings of a special House committee revealed the five ballots were cast by registered voters of Smith County, living within the challenged House District 79.

On Election Day in 2015, these five voters went to the precincts where they were supposed to vote under their new addresses. They were not on the voter rolls in their new precincts because they did not notify the circuit clerk of their change of address, but they were allowed to vote by affidavit.

After the election, the Smith County Election Commission was told by the Secretary of State’s office that the ballots of the registered voters should be counted, testimony revealed. With those votes counted, the election ended in a tie.

During the election contest before the special House committee, Tullos argued a state Supreme Court ruling indicated those affidavit votes should not count. The Eaton camp said the Supreme Court ruling was based on a law dealing with municipal elections. He further argued that the secretary of state’s office and attorney general’s office have been consistent that such affidavit ballots, if cast by registered voters, should count.

Under state law, the House could vacate the House District 40 results, which Henley requested in her petition, hold a new election or seat one of the candidates.