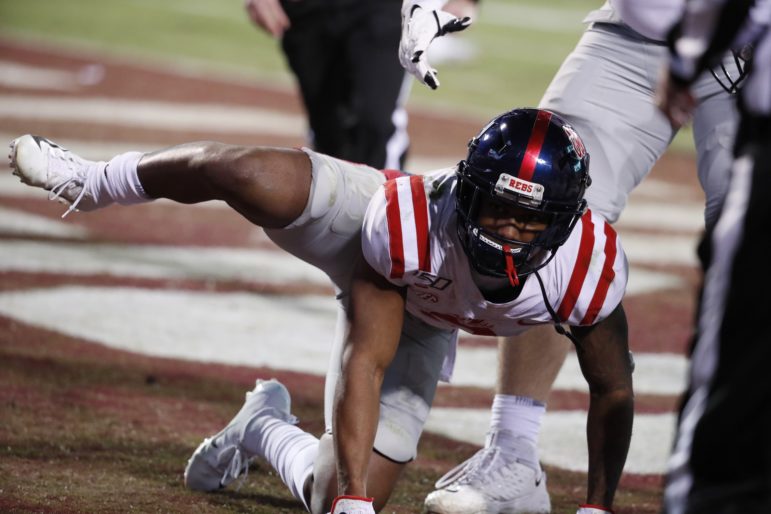 So, if you didn’t know the history of this oldest Mississippi football rivalry, you had plenty reason to believe that the 114th Egg Bowl would be a snooze fest to end all snooze fests.

And, boy, you would be wrong. Big-time wrong.

In one of the craziest, most exciting, and most perfectly imperfect Egg Bowls of the 45 these eyes have seen, Mississippi State defeated Ole Miss 21-20 before an announced crowd of 57,529 on a cool, crisp Thanksgiving night at Davis-Wade Stadium.

You had the home-standing Bulldogs taking a 14-0 lead early in the second quarter and threatening to run the Rebels right off Scott Field. You had Ole Miss firing back to tie it 14-14 at the half. You had State seemingly taking command in the third quarter with the largely partisan crowd thundering and cowbell-clanging its approval.

And then you had the Rebels coming back, against all odds, to turn the last two minutes – that seemed to last 30 – into a bizarro passion play. Listen: With less than a minute to play, Ole Miss faced fourth down and 24 yards to go at its own 14-yard line. And just when you thought the Rebels were deader than Jimmy Hoffa, Matt Corral naturally hit a somehow wide-open Braylon Sanders with a 57-yard strike to the State 29.

Then, it really got crazy. Long, long story short: Ole Miss ran 10 plays in the last 59 seconds. On the 10th, with four ticks remaining, Corral spotted senior Elijah Moore slightly open for a two-yard touchdown with Moore valiantly fighting his way into the end zone. What Moore did next was far from valiant. No, he celebrated by hiking his leg and acting as if he were urinating in the end zone, just as DK Metcalf had done here in the opposite end zone two years ago.

What was Moore thinking? Beats me. Obviously, he wasn’t. Thinking.

Moore was immediately flagged for (very) unsportsmanlike conduct. Joe Moorhead, the State coach, wisely chose to have the penalty assessed before the extra point, turning an almost automatic PAT into what amounted to a 35-yard field goal. Luke Logan missed wide (by a yard or so) to the right.

And that was that. Two ways to look at it: (1) Moore “whizzed” the game away. (2) While Ole Miss goes home for the holidays, State now goes bowling somewhere.

Presumably, they will be led there by one fired-up football coach. Moorhead was both emotional and dogged in his post-game remarks. His entire opening statement follows: 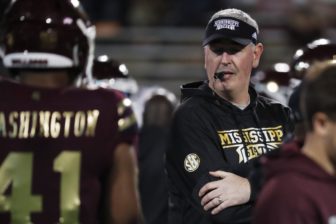 “Obviously, it is a huge win for the program on a lot of different levels. I’m incredibly proud of this team, particularly the 26 seniors. For them to fight the way they did today in all three phases, until the very end of the game and until the last second ticked off the clock, I couldn’t be any prouder of the players, the coaches, our administration, the state, this school and the majority of our fans. In 21 years of coaching and a bunch more as a player, I don’t know that I’ve gone through a season with as much adversity as we’ve had to face from having 10 guys out to start the season – some of our best players – going through a quarterback rotation and having a ton of injuries. We had some ups and downs but the kids just kept fighting. I think more than anything it’s a validation for this team and a validation of our culture. To me, it puts an exclamation point on the narrative floating around that I’m not the man for this job, this program or I can’t coach in this league. That’s not the case. I’m damned proud of this team. I love the way our kids handled adversity. I love the way the coaches fought through adversity. I know there were a lot of ups and down and belly aches. Just make sure everybody understands: This is my school. This is my team. This is my program. I’m not interested in anyone’s validation except the guys in that locker room. If you ask them who is the right man for the job, they’re going to tell you it’s me. I promise you that. I’m not going to get into what we’ve done in the past years and how we were able to get to a bowl. No one get it twisted. I understand what it means for this program and I’m here. This is my team. This is my program.”

Moorhead paused for a long moment, then added: “You’ll have to drag my Yankee ass out of here.”

State athletic director John Cohen, reached by text message late Saturday night, said he did not want to comment at this time.

At the other end of Scott Field, Matt Luke’s Ole Miss press conference was much more subdued. He said he was proud of his team’s fight and disappointed it didn’t result in victory.

Asked directly about Moore’s penalty, Luke responded. “Just disappointed. That’s not who we are. We’ve been a disciplined team all year. I’m just disappointed it happened.”

For those wondering – and it is a moot point now – Ole Miss was going to kick the extra point to force the overtime. Logan was already on the field before the penalty was assessed. Luke said he felt good about the Rebels chances in overtime, perhaps because the Rebels had out-gained State 384-314 in regulation.

You cover enough of these games over the years, you begin to think you’ve seen everything and then you see something new. Early in the fourth quarter Thursday night, Moore caught a booming punt at his own 30-yard line. And then he raised his hand to signal a fair catch. It doesn’t work that way. State’s Marcus Murphy dropped him in his tracks. Did we say the game was perfectly imperfect? That’s exhibit A. There were many more .

Unfortunately for Moore and Ole Miss, the fair catch signal after his catch wasn’t nearly his most ill-advised mistake this night.