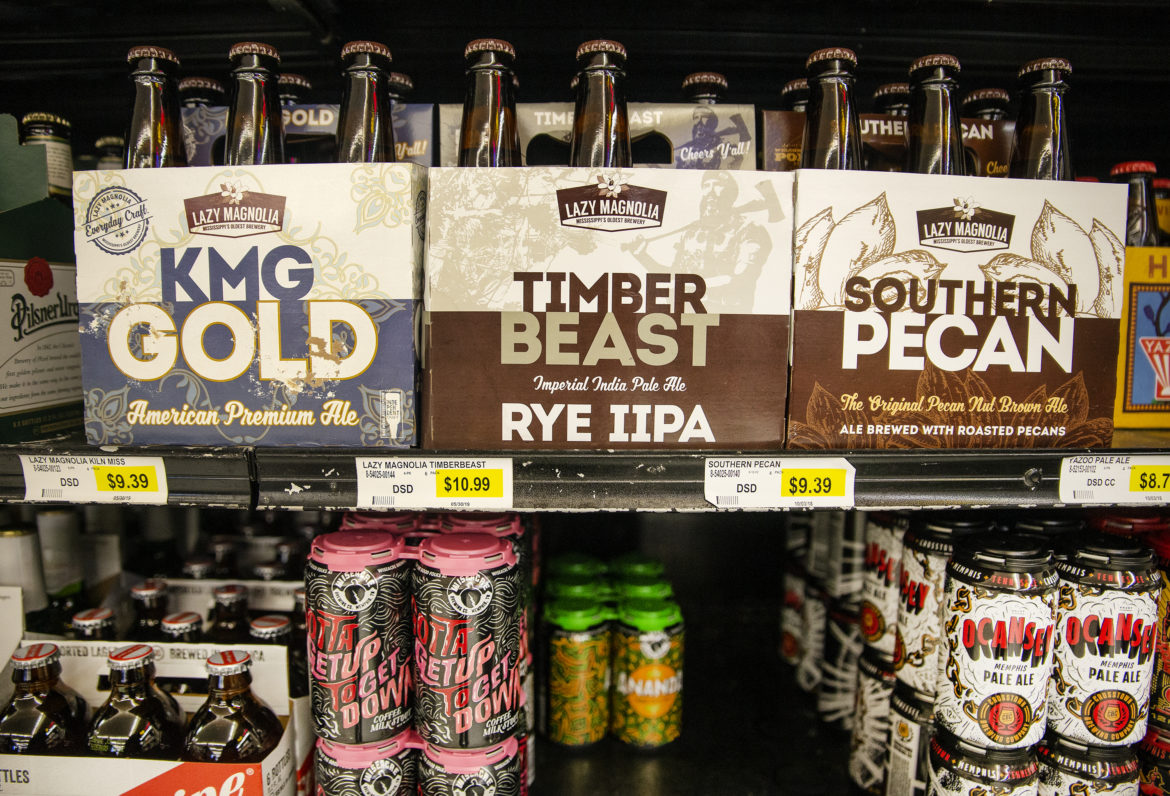 Southern Pecan, a beer brewed at Lazy Magnolia Brewing in Kiln, Miss., is placed on the selves at McDade’s Market in Jackson, Miss., Tuesday, November 12, 2019.

The sight of mattresses wheeling down 28th Avenue in downtown Gulfport, on homemade bed frames is an annual event for Chandeleur Island Brewing Company.

ChandyFest, a music, food and beer block party — including, yes, a bed race — started as a way to attract customers and build a sense of community around the craft brewery in the pre-2017 days, when a dozen young breweries were struggling to establish themselves amid Mississippi’s complex beer laws.

That year is a line drawn in the sand in the state’s recent history with craft breweries. Since 2017, when the Mississippi legislature gave them the green light to sell their beer on-site, breweries that produce 60,000 barrels or less of light beer or wine per year can sell up to two cases per person each day from their taprooms.

“This is a hard business — the margins are small. If that wouldn’t have happened, we probably wouldn’t have made it because we need those margins to be able to keep the doors open.”

Breweries, such as Southern Prohibition in Hattiesburg, Lazy Magnolia in Kiln and Chandeleur quickly expanded their operations in hopes of filling bar stools and moving product at wholesale prices. Today, anyone of legal age can walk into Chandeleur’s nautical-themed tap room and get a cold draft beer and leave with a six-pack or more of local brew.

“If we didn’t have the tap room,” says Southern Prohibition’s Ben Green, “a lot of the beers would be priced out of people’s range. We’re able to keep our price in check here because we’re making it and selling it across the bar.”

Matthew McLaughlin, an attorney at McLaughlin, PC, who has worked with more than 200 small breweries, says a big reason why on-premise sales are vital in Mississippi is the limited shelf and tap space in traditional distribution points such as supermarkets and bars in a state that remains focused on beers produced by large, entrenched breweries.

“Mississippi has historically been very macro focused,” he says. “Ninety-nine percent of all the beer consumed here was made outside of the state and was made by somebody that would fall within that macro-production category.”

As executive director of the Mississippi Brewers Guild, McLaughlin helped lead the effort to get the on-premise provision passed and signed into law. The change has had a profound effect on the industry in Mississippi.

Being able to offer their beers on-site allows breweries to be more creative with their product. Customers can sample specialty brews without the brewery having to commit loads of production, marketing and distribution expenses to roll out a new product in a retail setting.

“Now we can do smaller, more experimental batches,” says Green. “We can do some batches with bigger flavor profiles. We can turn around something a lot faster and get direct feedback from the people that are buying these beers across the bar.”

Southern Prohibition has succeeded with non-traditional brews in the marketplace, as well as in the taproom. In fact, credit for the brewery’s growth with distributors in Mississippi this year rests with Crowd Control, a double IPA that couldn’t be further away from 99 percent of the beers sold in the state. It’s now their top seller.

“We found some really good success with a beer that several years ago you wouldn’t have thought would have had done as well as it has,” says Green. “I think some of that is attributed to the taproom being open here.”

“This year we’re going to close off the year making more beer than we’ve ever made,” he adds.

While the law change has benefitted the craft beer industry in Mississippi as a whole, it wasn’t enough to save some brewers. Mighty Miss in Greenville, Lucky Town in Jackson, Biloxi Brewing Company and Slowboat Brewing Company in Laurel have all ceased brewing, while others have experimented with brew pub setups. Slowboat now operates as a bar.

“There are 8,000 suppliers now in the United States,” explains McLaughlin. “When I first started working in the alcoholic beverage industry, there were 700 — back 16 years ago. Retail shelf space and tap handle space has not grown at nearly that clip, so you have unbelievably fierce competition.

“We live in an environment of everybody wants the newest thing, and everything’s got to be hyper-local. You can’t be local six states away, because six states away they may have 20 breweries within a 50-mile radius, and that’s the local thing.”

Lazy Magnolia — established in 2003, making it the state’s first craft brewery — is now available in 18 states, as far away as Colorado and New York. But younger breweries entered a completely different market. Southern Prohibition, for example, distributes to five states and has no current plans to grow that footprint. Growth isn’t always about acquiring new markets, though, says Green. It’s also about increasing market share where you already have a foundation.

“We’re trying to dig some deep roots in the places we currently are,” he says. “We’ve had tremendous success even being six years old this year in the state of Mississippi. I never want to say never, but as of right now we’re pretty content in the states we’re in. We’re just trying to go a little bit deeper and into some of those.”

“I can tell you that we’re growing, and I believe that the market is under saturated,” says Reese. “When you look at it from a national standpoint, it’s 17 or 18 percent [market share]. You get to a town like Portland [Ore.] and it’s over 50 percent. Our challenge is education. If we can educate our consumers about what craft beer can be, I think we’ll all win.”

“The biggest challenge right now is getting more Mississippians drinking Mississippi-made beer,” says McLaughlin. “If we could move that market share up to 4, 5 or 6 percent, that would be a massive boost to everyone that is operating in the industry right now.”

This story is part of Mississippi Today’s Mississippi ExPats Project, an effort to connect with Mississippians living outside the state through live events and expat profiles. Sign up below for The ExPat, our newsletter curated especially for our expat community.