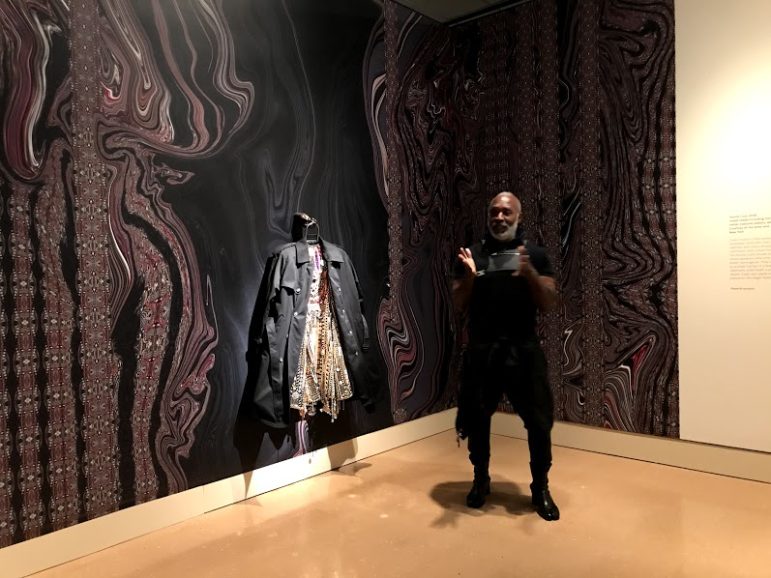 Artist Nick Cave discusses his work, “Hustle Coat,” an installation in “Nick Cave: Feat.” at the Mississippi Museum of Art.

“Nick Cave: Feat.” at the Mississippi Museum of Art through Feb. 16 is a traveling exhibition of 17 works by the Chicago-based contemporary artist. The survey of his work includes sculpture, video and installations, for both a wide grasp and an immersive introduction to Cave’s art and the materials he uses to create it — buttons, beads, bamboo, baskets and even a vintage Easter bunny among them.

Cave was recently picked by The New York Times Style Magazine as one of “The Greats” — a talent who mastered his craft and changed the field, as well as the culture at large. For an artist who considers himself a messenger first, artist second and teacher third, the recognition left him humbled and pleased, he says. But, fame is not the aim.

“I’ve never really allowed any of that kind of exposure to get in the way of my real work,” Cave says. “I’m an artist with a civic responsibility.”

The Soundsuit (so named for the rustling noise made when the sculpture moves) is Cave’s best-known creation, and 10 of them command a runway at the exhibition’s start. Enveloped in Button Walls — gallery walls covered in black fabric and thousands of white buttons — the effect is part starry sky, part special space to contemplate the mesmerizing collection. 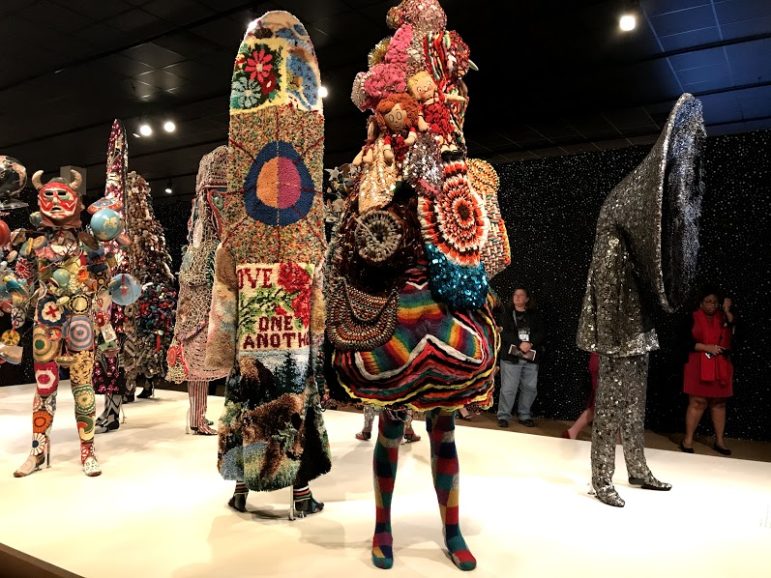 The Soundsuit is Nick Cave’s most famous creation. “Nick Cave: Feat.” opens with a runway showcasing 10 of them.

His first Soundsuit was a response to the 1991 beating of African-American motorist Rodney King by Los Angeles police officers. As Cave dealt with concerns about profiling and feelings of being discarded, a twig found on the ground began a collection of them, then worked into a sculpture. He didn’t think he was making something wearable, he says, until he put it on. The sound it made led to the notion of protest. “To be heard, you’ve got to speak about it.” The human-shaped, usually wearable sculptures form a suit of armor that renders race, gender, class and identity indistinguishable.

“It’s Rodney King, it’s Trayvon Martin … the list goes on and on,” Cave says of the push behind his creations. “I’m just glad I can be the catalyst, to create work that allows us to come together and have these difficult conversations.” That’s always been the spark — the political landscape and his role as an artist to come up with ways to talk about issues, but with optimism and hope.

“Nick Cave: Feat.,” organized by the Frist Art Museum in Nashville, opened there in late 2017. Even without initial plans to travel the solo show of this high-demand art star, they built an international tour for it — evidence of how much people want to see Cave’s work, says Frist curator Katie Delmez. They had to turn down about a dozen institutions wanting to host it. Jackson is its final stop. “I think that really speaks to your deep-seated, really sincere belief that it’s just as important for people in Nashville, and Akron, Ohio, and here in Jackson, Mississippi, to see this art, and not just people living in the art capitals like New York and L.A.”

Delmez pegs accessibility as part of why Cave’s art is so successful and sought-after. “You don’t need an advanced degree in art history or art to simply be blown away by its sheer beauty. The bold colors and different textures and patterns — they’re very seductive and you just want to look very, very carefully.” Viewers who want to go deeper will find the tough issues addressed in Cave’s art, particularly identity as it relates to race, gender and sexuality. “He’s looking at some really persistent problems that America continues to face, especially racism, police brutality and gun violence.”

A Soundsuit with a gramophone-like top suggests speaking out. Muffled with a screened
surface of wire and bugle beads in blue and black (recalling the police uniform) and underneath, bugle beads in red, black and green to represent the African-American flag, it dives deep into how it feels to be silenced.

Cave reclaims and reuses existing craft objects, finding them new purpose as they shape his work and are elevated in the process. He traces the practice to his childhood. “Growing up one of six boys, it was always hand me downs, and so when it got to me, I was like, I don’t want that. I found myself sort of remaking things. I think that really is where it started.” Adornment plays a role, too. “How do you remain authentic and beautiful in the context of everything going on?”

Fashion is a thread in his artistry, and “Hustle Coat,” an open trench coat with gads of shiny things inside, harks back to the street salesmen of his childhood, whose coats opened to display fascinating arrays of things for sale. “How do you design that for yourself?” Cave says. “It comes out of me … thinking about, what is it that I want?” Dazzling, colorful wall works at the front of the exhibition and in this installation, are by Bob Faust.

Source materials such as figurines, doilies and pin baskets prompt memories and connect with viewers, regardless of background, Delmez says. Since many materials were handmade, primarily by women, the art also brings visibility to the labor and people who may have gone unrecognized. 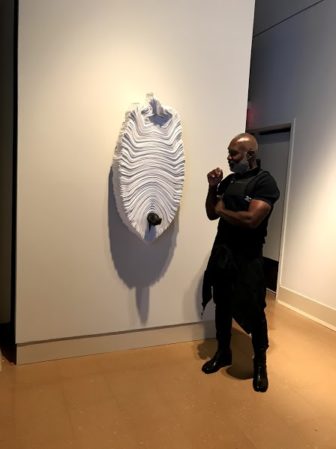 Nick Cave discusses the spark of offensive black memorabilia, all connected to servitude, that led him toward a new body of work, such as this wall piece of layered linen napkins and a bronze hand.

One startling flea market find — the head of a black man that, according to its label, was a
spittoon. led Cave down “this crazy path,” he says, “of looking for the most repressive, offensive objects of black memorabilia that I could find for this new body of work.” Such objects, found across the country, all connected to some form of service, he realized. A wall piece in the exhibition is one creation in that journey — a cupped bronze hand, reaching out under layer upon layer of linen napkins, that could read as offering or receiving. The white napkin folds may bring to mind an angel’s wings, or the weight of time and history in the rings of a tree.

The large-scale installation “Architectural Forest” consumes one large gallery with brightly colored beads and psychedelically patterned strands of bamboo that hang from the ceiling, evoking an enchanted forest and inviting personal discovery as viewers walk around it.

“What a universe you’ve created,” Mississippi Museum of Art Betsy Bradley said to Cave at the exhibit’s opening. “I think it’s magic. … Taking that initial impulse of fear and anxiety, and turning it into pure joy and strength and beauty, is really a remarkable, almost superhuman accomplishment.”

Admission to “Nick Cave: Feat.” at the Mississippi Museum of Art is $15 per person, $13 seniors and groups of 10-plus, $10 college students with school ID and free for museum members and children younger than 5. Admission is free for K-12 students on Tuesdays and Thursdays.

Sherry Lucas is a veteran feature writer in Jackson whose stories spread the word on Mississippi's food, arts, culture and communities. A lifelong Mississippian and University of Mississippi graduate, Lucas has decades of daily newspaper experience. She is now a freelance writer and contributes regularly to Mississippi Today.

‘An artist with a civic responsibility’: Nick Cave exhibition at Mississippi Museum of Art through Feb. 16