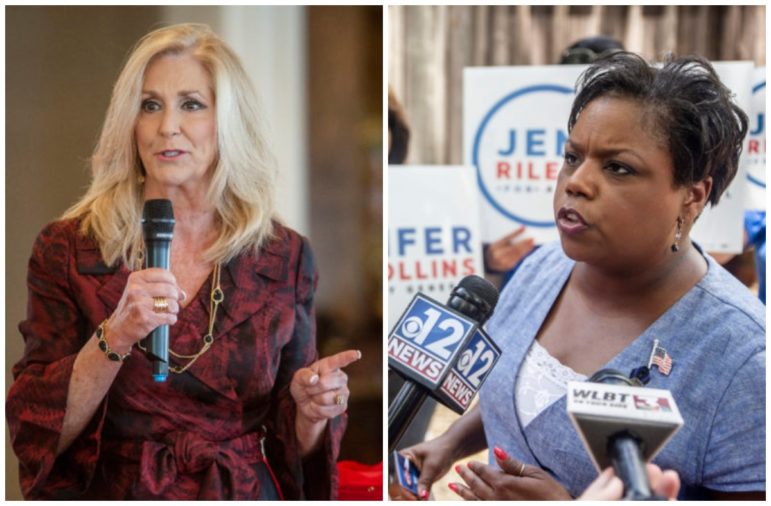 Whomever voters select in the Mississippi attorney general’s race on Nov. 5 will make the history books.

Lynn Fitch, the Republican nominee for attorney general who has served as state treasurer since 2011, would be the first woman and the first Republican to hold the office since Reconstruction.

“For the past eight years, I have applied my conservative principles and solution-driven approach to achieve great results for the people of Mississippi,” Fitch, 58, told Mississippi Today. “I want to apply these same principles and this same approach as your Attorney General to make Mississippi communities safer, protect our most vulnerable populations, and streamline our regulatory structure to make a lasting impact for Mississippians.”

Jennifer Riley Collins, Democratic nominee for attorney general who is the former director of the Mississippi ACLU and retired U.S. Army colonel, would be the first woman to hold the office and the first African American to hold any statewide office since the 1800s.

“The people of Mississippi deserve a proven protector,” Riley Collins, 53, told Mississippi Today. “My decision to run is a continuation of a lifetime of service. My professional and personal experience has prepared me to serve the people of Mississippi. I am an experienced and seasoned litigator. My legal career has been spent representing marginalized communities and people. I swore to protect and defend and to uphold the law in both careers, military and civilian. The people deserve to have a committed public servant.”

The Mississippi attorney general serves as the state’s chief legal officer and advisor on both civil and criminal matters. Responsibilities of the office include representing public officials and state agencies in court and issuing legal opinions that interpret state law.

Current Attorney General Jim Hood, who is the Democratic nominee for governor this year, has served in the office since 2003. Hood, the only statewide elected Democrat since 2007, often opposed policies passed by legislative and executive branch conservatives — a point of contention for politicians on both sides of the aisle.

Before becoming the first Republican woman elected state treasurer in 2011, Fitch was selected in 2009 by former Gov. Haley Barbour to serve was executive director of the Mississippi State Personnel Board. She also previously served as deputy executive director at the Mississippi Department of Employment Security and as counsel for the state House of Representatives Ways and Means and Local and Private Legislation committees.

During her campaign this year, Fitch has made clear her desire to champion conservative policies. Fitch, who served as chairwoman of the Mississippi Women for Trump group in 2016, has barely mentioned Riley Collins on the campaign trail, instead focusing on issues and politics.

“I’m an original Trump supporter,” Fitch said during the Neshoba County Fair earlier this year. “I’m one of the first statewide officials to support President Trump. He selected me to be the chair of his Women for Trump Mississippi group. I have a relationship with our president, and you can count on me to work with our president to stand strong, to fight illegal immigration, build that wall and also to stop the assault on our Christian values.”

Riley Collins has touted her military service on the campaign trail. She served in the U.S. Army from 1985 to 1999, where she reached the rank of colonel. She was also a member of the U.S. National Guard and U.S. Army Reserve from 1999 to 2017.

Riley Collins, also a member of the Project Equity advisory board and the Mississippi Advisory Committee to the U.S. Commission on Civil Rights, has worked to increase her name identification through a repeated refrain on serving people of color and other underrepresented communities.

“I will fight for the people of Mississippi to ensure the law is upheld, and fairly and justly for all,” Riley Collins said. “I will protect our children who are victimized by career politicians who only want to serve a segment of Mississippians in order to serve themselves.”

Riley Collins also earned statewide headlines in September after chastising Hood for not endorsing her campaign, writing on Facebook: “Ask yourself why. I think it is a question all citizens should ask and something they deserve to know. I urge General Hood to reconsider his lack of support for my campaign. I am running to serve the people not special interests.”

For information on all candidates running for statewide office, view our #MSElex Voter Guide.