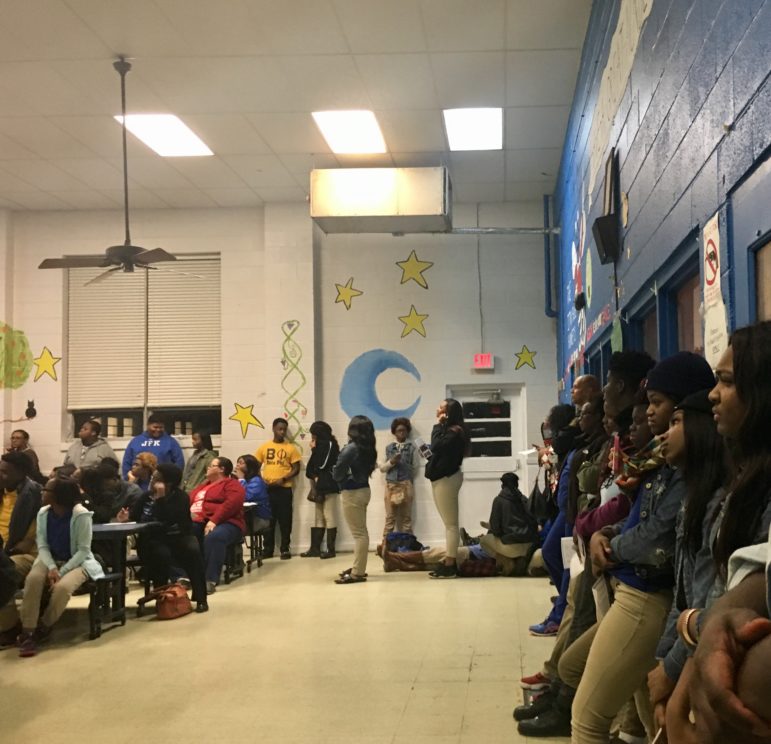 January, 2018: Students wait to hear which schools will close within the North Bolivar Consolidated School District.

A dispute over school codes for accountability purposes has left a Delta school district with an F rating it says it doesn’t deserve and some, including state board members, questioning if there is a breakdown in how Mississippi Department of Education officials are communicating with local school districts.

The dilemma, which some say comes down to semantics and is being called ludicrous, ridiculous, and heartburn inducing, comes on the heels of a separate mix-up this summer over the state’s communication to districts about teacher licensing requirements that jeopardized hundreds of educators’ jobs. The department is also still tied up in a longstanding legal battle with the Corinth School District over accountability ratings the superintendent has called “an unjustifiable black eye” due to unclear communication of expectations from the department.

In the latest dispute over how Mississippi schools are graded and whether that’s done fairly, the North Bolivar Consolidated School District is forcing the state to reexamine the rules about how districts like this receive ratings. On Oct. 10, North Bolivar officials appealed an apparent inaccuracy with graduation rates that negatively impacted their accountability rating. Mississippi Department of Education officials disagreed, telling the district it failed to follow the correct steps and can’t change results just because they don’t like them.

Who is correct in this situation? It depends on who you ask.

The state board approved 2018-19 school ratings in September. Districts are allowed to appeal grades, but ultimately the state board decides whether to uphold the ratings.

Prior to the board meeting, North Bolivar superintendent Maurice Smith wrote in a Sept. 16 letter to the department, “MDE informed us that when schools consolidate to form a new school, the new school receives the graduation rate of the district.”

This did not happen.

“Do not discount those 250 students that were in John F. Kennedy High School. Give them the graduation rate that they earned and they deserved,” Smith said at the state board meeting. “This is going to have a tremendous impact on our school environment and our community. They earned those points.”

Smith also told the board that Northside’s lower graduation rate hurts the district’s accountability rating as a whole — that 2.5 percent difference dropped the district from a D rating to an F.

“Districts are not allowed to go back and change their decisions after the fact because they don’t like their accountability results,” said Alan Burrow, MDE executive director of district and school performance. “The department feels that this is an effort to manipulate those accountability results in order to get a D for this high school that was assigned F.”

The difference at the high school level occurred because the district did not correctly request a new school code to include the students from both schools. Since the consolidation moved all students to Broad Street’s building, the district received the graduation rate for Broad Street’s school code. Smith said he followed what he thought were MDE’s instructions to ensure that the student performance from both schools would contribute to a combined graduation rate.

Smith told board members those students should not be penalized for a coding error, something Alan Burrow, MDE executive director of district and school performance, shot down in response.

“Let me first be clear that there is no coding error regarding the graduation rate calculation for North Bolivar Consolidated School District,” Burrow said.

“So the bottom line is, that didn’t happen because the district didn’t request it,” Vanderford said.

Smith said he did not know he needed to request a new code — he thought his communications with MDE, where he wrote “we respectfully request the assigning of the district graduation rate to reflect a true representation of the students at Northside High School” was clear enough.

“If they do not include this score for JFK, they’re ignoring the impact that those kids had on the district’s scores,” Jim Keith, a school board attorney, told Mississippi Today. “They don’t want to go back and change it because he didn’t use the magic words ‘we need a new code.’ That’s ludicrous.”

Vanderford pointed out that if the board approved North Bolivar’s appeal, it could set a precedent that violates current department rules. State policy says accountability scores “are applied to the school the following year, regardless of any reconfigurations or redistricting that takes place during the summer after testing or during the school year before testing.”

“Of course we’ve had conversations with other districts that consolidated that had the same issues, or similar issues, but they did not appeal,” Vanderford said. “So then do we go back and change all the grades for those schools?”

January, 2018: A room full of people wait to hear which schools will be closed in North Bolivar Consolidated School District.

North Bolivar officials and MDE officials disagreed on the semantics of how Smith should have gone about requesting that JFK be included in 2018-19 consolidated results, but board member Karen Elam questioned whether the department was doing its job in clearly outlining what consolidated districts need to do in situations like this.

“We’re going to see more and more consolidation. Do we need to have a policy that…holds their hands better to guide them through?” Elam said. “The department is not fulfilling the duty of providing this guidance.”

Board members agreed to address the department’s business rules surrounding consolidated schools and accountability to better clarify how schools are graded. They also voted to send the appeal back to the Commission on School Accreditation, which initially denied North Bolivar’s appeal.

At the Oct. 22 meeting, the commission had a spirited discussion where members questioned the fairness of assigning the school a certain graduation rate because of rules the district wasn’t aware it needed to follow.

“I think it’s our responsibility to do what’s right and what’s right for the district. And so just because a rule is on a piece of paper, that’s the right thing to do? I think the whole conversation is ridiculous, personally,” commission member Sarah Foster said.

Ultimately the commission voted to uphold its original decision to deny the district’s appeal with a 5-4 vote, and the decision goes back to the state Board of Education for a final decision. If the board also denies the appeal, North Bolivar will remain an F and Northside will keep the lower graduation rate.

“I think that we penalize too many schools for little bitty things,” commission member John Paul Mistilis said. “But rules are rules.”

State education board to decide on the ‘ridiculous,’ ‘ludicrous’ rule hurting a Delta school district