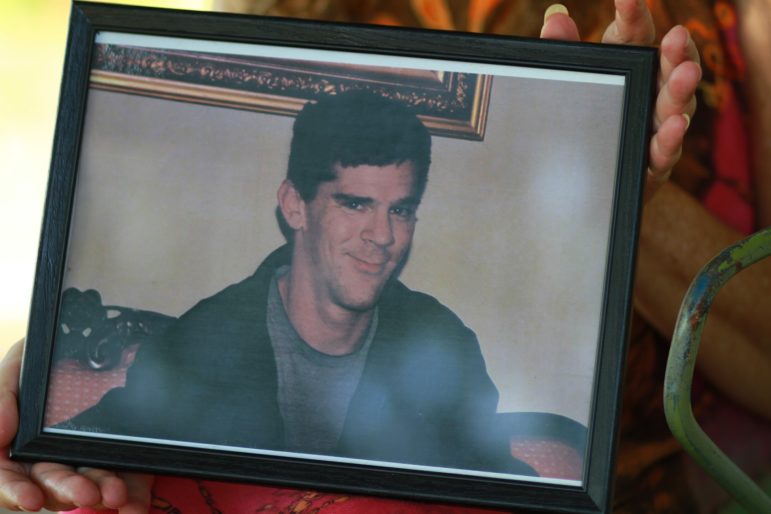 In this Sept. 6, 2019 photograph taken in Gulfport, Miss., Melody Worsham holds a portrait of her son Gabriel, who committed suicide at the age of 34. “I knew helping others suffering from mental illness was my calling long before Gabriel died,” said Worsham, 57, who works with the Mental Health Association of South Mississippi in Gulfport. “Now, I’m even more sure that I’m doing what I was meant to do.” (Luis V. Solis/Mississippi Center for Investigative Reporting)

BILOXI, Miss. — On his desk were a couple of file folders, a notepad filled with letters, symbols and numbers, and a computer he had built using spare parts.

It was the late 1990s, when personal computers were considered a luxury item. He was 16.

Melody Worsham, 57, still gets emotional recalling that moment with her son, Gabriel.

“I pushed it, and the computer screen went from blank to a gorgeous picture of snow-capped mountains,” Worsham says. “He didn’t draw the picture. He wrote a code for it.

“He had never had a computer lesson. He was a genius with numbers and figuring out things. It was something that made him feel good about himself, which was important. He’d always had trouble fitting in, the odd ball out. Plus, he had been sexually molested by a family member as a child.”

Gabriel battled severe depression. The mental disorder eventually led him to suicide in October 2016 at age 34.

And just like Gabriel, 90 percent of those who died by suicide in 2016 had a diagnosable psychiatric disorder at the time of their death.

‘I know what people with mental illness are feeling’

“We knew way back in childhood that he had depression,” Worsham says. “We tried him on (Attention Deficit Disorder) medication, which only made the depression worse. He became very morose and bitter. He refused counseling.

“When you’re depressed like that, you can be overwhelmed by the things you see in the world. Everything is magnified.

“Plus, he lived with a mother who suffered mental illness. I was in and out of (mental) hospitals, and I know that had an effect on him.”

Worsham suffered Post Traumatic Stress Disorder and schizophrenia since her early teens. Counseling and medication helped level her emotions. She has been medication free the past three years.

In 2012, Worsham joined the staff of the Mental Health Association of South Mississippi in Gulfport. She works as a certified peer support specialist as part of the program WRAP (Wellness Recovery Action Planning.)

“I knew helping others suffering from mental illness was my calling long before Gabriel died,” Worsham says. “Now, I’m even more sure that I’m doing what I was meant to do. I know what people with mental illness are feeling. I know their pain.”

WRAP is a program that teaches wellness tools and stress management.

“By learning simple, safe and free ways to stay well, triggers can be controlled from growing into a situation where things are breaking down,” according to the Mental Health America website. “Action plans are formulated so that when a trigger occurs you already know how to handle it positively. This applies to anyone who deals with stress, anger, anxiety or other difficult feelings.”

Its mission statement: “To be a champion of positive mental health and wellness.” It offers mental health screenings, peer support and the Opal Smith Drop In Center, a day program for adults with mental illness that promotes social, educational and work skills.

Worsham is an integral part of the program.

“I would like people  to  know the Melody I know,” said Joy Hogge, executive director of Families as Allies, which advocates for the care of children suffering mental illness. “She’s  insightful, perceptive about relationships and life.

“When she’s talking about different situations and what we need to do and applying it, I rarely think about the fact that Melody has a major mental illness. And the fact that she has lived with (mental illness) gives her a whole area of expertise. There is nothing like someone who has walked in those shoes.”

Her father survived two tours of Vietnam but he wasn’t himself upon return. While stationed at Keesler Air Force Base in Biloxi, he tried to kill her mother inside a busy restaurant.

“She escaped out the back,” Worsham says. “When the base heard about the incident, he was confined to base. My brothers ran away to find our mom and I was left in the family home alone.”

They didn’t come back. 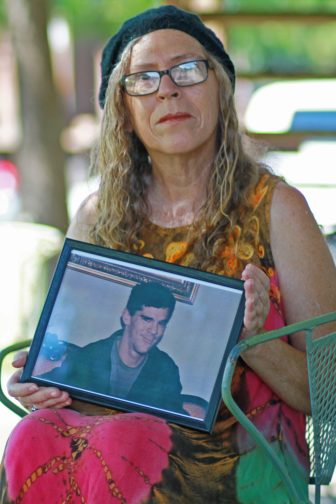 In this Sept. 6, 2019 photograph taken in Gulfport, Miss., Melody Worsham’s personal odyssey through mental health struggles and her son Gabriel’s suicide led her to devote her life to serving as a certified peer support specialist as part of the Mental Health Association of South Mississippi’s WRAP program.

“I was 8 or 9 and lived alone,” she said “(My dad) would give me enough money to buy groceries and school clothes. I went and bought them myself, registered for school. I spent 18 months doing things my parents should have been doing for me.”

Her dad showed up one day with a plane ticket for Worsham. His sister and family overseas had agreed to take her in.

“We lived in Holland, Germany and France,” she says. “They were good to me, and I’m very thankful that I received a top-notch education.”

But the nightmares she lived as a child began to affect her behavior around the age of 13.

“I would miss days … by that I mean, I wouldn’t remember them,” she says. “Two or three days would pass, and I would think it was Tuesday, and it was actually Friday. It was like prolonged blackouts.

“I would carry on conversations with people and tell these bizarre stories.”

She was diagnosed with PTSD and schizophrenia as a young adult.

“It felt good to have a name for it, to know what was going on,” she says. “I was fortunate that I was able to get help — and that I was open to it — and get the medication that made such a big difference in my behavior.”

She only wishes Gabriel would’ve accepted the help available to him.

“I gave (Gabriel’s dad) custody of the kids because I didn’t want them to see me mentally ill,” she said. “But me and his father were able to maintain an amicable relationship.”

Just before Gabriel’s 16th birthday, he told his parents he wasn’t going back to school.

“He was failing most of his classes, mainly because he was bored,” she says. “He knew he wanted to work on computers for a living. His dad and I were old school and told him that if he wasn’t going back to school, then he had to get a job.”

Gabriel started hanging out with older friends who also were into computers. He began building websites for individuals as a hobby.”

At 18, he left home and headed for New Orleans.

“That’s where he got with the wrong crowd and starting using drugs — heroin or whatever else he could find,” Worsham says.

But when he was 22, Gabriel returned home.

“He got his GED and a job with a company programming computers. But he had started drinking then, and the alcoholism got in the way of his work. They eventually let him go.

“He had a lot on his mind. Gabriel had always talked about having a family. He said, ‘I’m 22 and still not married or have any children.’ I told him, ‘Son, you’re still young. But to provide for the kind of woman you want, you have to be a provider.’ ”

He eventually returned to Louisiana — and to alcohol.

“He would call me up and say some of the ugliest things,” Worsham remembers. “That’s what he would do when he was depressed. But at the end of of one of those conversations, he said, ‘Mom, I don’t want to die like this. If I keep drinking, I know it’s going to kill me. But if I don’t drink, I get the shakes so bad I can’t stand it. Maybe I’ll just take those roach pills I bought at the feed store.’ ”

Worsham persuaded Gabriel to come home to the Gulf Coast and enter a drug and alcohol rehabilitation center. He spent the required 28 days there.

“He assured me he would attend intensive out-patient sessions three times a week in Baton Rouge,” Worsham says. “But the depression took over again. He didn’t do the follow-ups.

“He sent me a link to some artwork he had done. It was brutal to look at. It said things like ‘I hate you’ and ‘you’re stupid’ and ‘kill yourself.’ ”

Another piece of art showed a man with a gun to his head.

“I know that’s the one he really wanted me to see,” Worsham says. “So I called him. ‘You don’t have to be in this kind of pain. Let me get you help.’ I believe he was listening, but I don’t believe he thought he could ever truly find peace.”

But in 2014, he seemed to catch a couple of breaks. He met a woman who would become his fiance. And he was offered what he called his “dream job” — providing IT support remotely while based in Augusta, Georgia.

“He came and lived with me for a week before moving to Augusta,” Worsham says. “He was happy. He wasn’t drinking. He was positive.”

Later on, he told Worsham that his fiance “makes me want to be a better man.”

“For the first time, his life seemed totally on track,” Worsham says.

But a tragedy triggered something awful inside Gabriel. He learned that a young man he had befriended in Louisiana had bludgeoned his grandfather to death.

“For some reason, Gabriel blamed himself,” Worsham says. “The depression got worse and worse.”

He lost his dream job.

But not long after that, he called Worsham and seemed upbeat again.

“He said that recruiters were calling him left and right and that he and his fiance were going to take a mini-vacation before he started doing interviews for a job,” Worsham says. “It’s the best talk we’d had in years.

“We even started doing dialogue from two of our favorite movies — “Cable Guy” and “Ace Ventura.”

“What I didn’t know was that’s what a lot of people do when they’ve decided to end it all. They are happy because they are so relieved the pain is going to end. I didn’t pick up on that and I should have.”

That evening, during a dispute with his fiance, he walked into a closet and pulled out a .32 caliber pistol. He turned and faced the wall, and as his fiance dialed 911, Gabriel put the gun to his head and pulled the trigger.

Nearly three years later, there are days when Worsham can’t even say his name.

“It feels like the devil ripped out my heart and stomped on it while he laughed at me,” she says.

“A piece of me died along with Gabriel. I don’t want people going through what he did or what I have. So I’m dedicated to my work.

“I’m thankful for it. I know I can make a difference.”

This story was produced by the Mississippi Center for Investigative Reporting, a nonprofit news organization that seeks to hold public officials accountable and empower citizens in their communities.