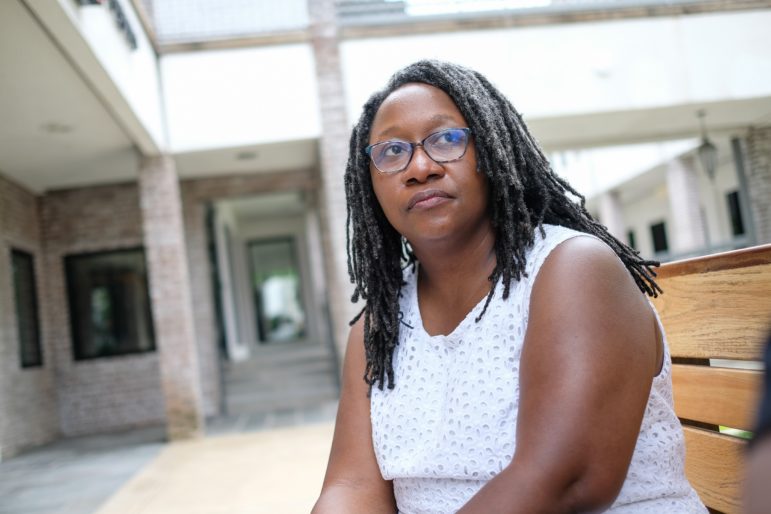 Latasha Willis, 44, has suffered from anxiety and depression since the early 90s. Today she works for the library system and is a NAMI Certified Peer-to-Peer Leader.

Latasha Willis left her customer service workstation at a telecommunications company, walked out the door and into oncoming traffic on U.S. Highway 80.

“I didn’t time it right. The car was able to stop before it hit me,” said the 44-year-old Jackson woman.

Her older sister, Treva Bradley, remembers getting that phone call about Willis and rushing to help. “When I had to pick her up from the side of the highway, I knew this was a problem,” Bradley said.

Driven by guilt over financial difficulties and feeling like an underachiever, Willis saw suicide as the only solution. “I was having to file for bankruptcy,” she said, recalling that 2002 botched attempt to take her life.

Suicide attempts can be a cry for help. For Willis, it wasn’t a cry, it was a solution – a way out of the anxiety and depression she now feels began when she started at Tougaloo College in 1992 at 17 years of age, having skipped her senior year at Calloway High School in Jackson.

“Latasha was always smart, a straight-A student,” Bradley said. “But we knew she couldn’t handle stress.”

Willis would have to wait a dozen years and almost take her life before she received an accurate diagnosis.

In 1998, her primary care physician diagnosed her with hypomania (high energy and mood swings) with associated anxiety.

Her first full-blown panic attack in 1999 drove her to an emergency room in search of relief. “I was pretty sure I was dying,” Willis said.

Such encounters with the medical system are typical, said Angela Ladner, executive director for the Mississippi Psychiatric Association. “The first line of defense in mental health in Mississippi are in family practice,” Ladner said.

After the failed suicide attempt in 2002, Willis finally thought she was going to get the help she needed. But like many others struggling with mental illness, she couldn’t afford it.

Diagnosed during a 10-day stay at St.Dominic Hospital with major depression with panic attacks, she went to a psychiatrist once but couldn’t afford treatment. She applied for Social Security Disability but was denied. She reapplied, finally getting approved a year later (in 2004) with a diagnosis of major depression and panic symptoms. She gained Medicare coverage for her medical bills, only to lose it in 2009 during a routine review.

“It threw me for a loop,” Willis said. “I didn’t know what to do. I hadn’t worked in five years. I was facing having no income.”

She had gotten used to working around obstacles. When she couldn’t afford to see the psychiatrist after her suicide attempt in 2002, she switched to Hinds Behavioral Health, one of the network of outpatient clinics operated by the Mississippi Department of Mental Health.

Its sliding-fee scale took her salary into account for costs, and she was able to receive free samples from the clinic for her medication needs.

She started work with Goodwill Industries in Ridgeland, a job she found through a caseworker at Mississippi Department of Rehabilitation Services. Later that year she was hired by Jackson Free Press in Jackson as an events coordinator, then production designer.

She continued in treatment, taking a range of medications at various times to cope with her symptoms—Effexor, Welbutrin, Ambien, Tramadol, Klonopin, Prozac, and Zyprexa.

She signed up with Obamacare in 2015 while she was going to graduate school for a graphic design degree. Offering low co-pays and low medicine rates, it was definitely a help, she said, to her treatment during the years she went back to school.

After finishing her degree, Willis worked from home as a graphic designer for various clients, including the Mississippi affiliate for the National Alliance for Mental Illness, better known as NAMI. She had first been acquainted with the organization in 2004 through a support group that met at St. Dominic’s Hospital.

Willis started out as a volunteer fundraiser with NAMI Walks, and later became a NAMI Certified Peer-to-Peer Leader. In 2015 she began contract work for them, redesigning their website and doing other social media services. She still leads support groups for them, with one starting meetings in September.

She sees her work with NAMI as a way to increase awareness and educate others about mental illness—a process she said she had to go through with her own family. “They’re supportive and understanding,” Willis said.

When she tried to take her life, “my family was quite distraught. I wouldn’t want to cause them trauma because of my trauma.”

Bradley echoed that sentiment.  “It took us time to learn from Latasha,” Brandley said.

Now Bradley understands the struggle even more having been diagnosed with depression and anxiety herself two years ago. “Now I’m barking up that same tree,” Bradley said.

She advises family members of people having mental issues to educate themselves on their loved one’s disorder and listen to their loved one about their problems.

These days Willis is seeing a counselor at the University of Mississippi Medical Center with a diagnosis of generalized anxiety disorder and dysthymia (low-grade depression) and is medication-free for the moment. Her last depressive episode was in August 2018. She recently began full-time work again, as a social media manager for a local library system.

Looking back over her story, Willis said, “I know it’s not always the case, but I got lucky.”

This story was produced by the Mississippi Center for Investigative Reporting, a nonprofit news organization that seeks to hold public officials accountable and empower citizens in their communities.

Fate kept her from killing herself. ‘I got lucky’