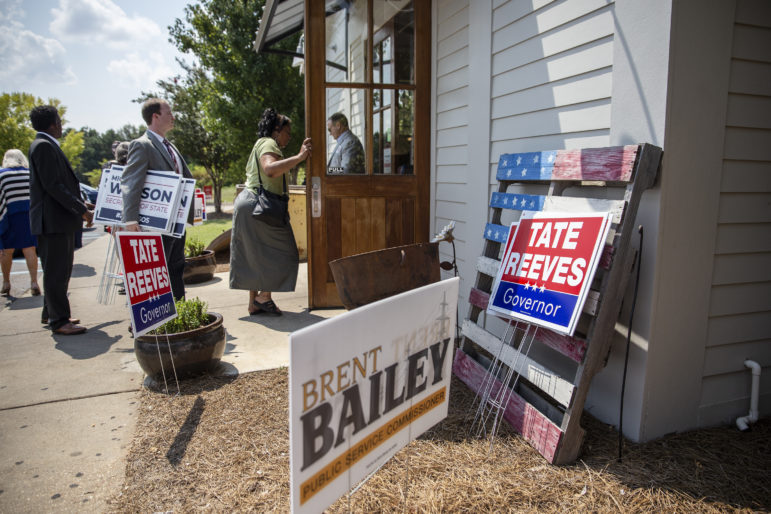 Former Chief Justice Bill Waller Jr., the losing candidate in the Republican runoff for governor, said last Tuesday he would not endorse Lt. Gov. Tate Reeves, the party’s nominee. Later, Secretary of State Delbert Hosemann, the party’s nominee for lieutenant governor, did not give a straight answer to reporters about whether he’d endorse Reeves.

Gov. Phil Bryant, who has discussed the serious threat Democratic Attorney General Jim Hood poses in the November governor’s race and how the election could affect his own legacy, called Mississippi GOP Chairman Lucien Smith last week, and the two planned an event.

The Republican Party sent the invitation to the public on Friday afternoon and billed the event as a “victory kickoff” at a popular buffet restaurant in Madison.

But as Bryant, Smith and all eight statewide candidates spoke before enthusiastic attendees on Monday, it seemed the event was less a general election kickoff for the Republican slate — most of whom face little serious challenge or no challenge at all from Democrats in November — than an attempt to rally Republicans for Reeves.

“We’re here to say we love one another. It’s good to be a Republican,” Bryant said to the crowd of about 150. “We wanted to get everyone here together so you can see your Republican team and know that we are all endorsing, we’re all supporting, we’re all hugging, we’re all giving money to each other to get us a victory and across the finish line in November.”

Democrats have enjoyed little influence over state government the past eight years, boasting just the one statewide office of attorney general and the majority of public service commission members. Republicans hold a three-fifths supermajority in both the House and the Senate, meaning they don’t need a single Democratic vote to pass any legislation.

All eight Republican candidates for statewide office talked at the event on Monday about the importance of an even redder future. Multiple Reeves campaign staffers stood at the front door of the restaurant and walked around passing out “Tate Reeves for governor” stickers. When Bryant introduced Reeves to the podium, the crowd gave Reeves an extended ovation.

But during his eight-minute speech on Monday, Reeves didn’t directly address the elephant in the room: the question of party unity. He instead focused his eight-minute speech on several policy proposals dealing with rural healthcare, like additional training for physicians and medical professionals across the state, and public education, saying the state should continue to spend “more money in the classrooms and less money in the district offices.”

Several times, Reeves fell back on his long-standing strategy of pairing Hood with national liberals.

“The other side’s going to tell you that labels just don’t matter,” Reeves said. “I want you to think about this: When we began this meeting today, we began by praying to our almighty God, and by pledging allegiance to that flag. The national Democrats have chosen to take God out of their platform, and many of those national liberals would rather burn that flag than pledge allegiance to it. That’s what we’re looking at in 2019.”

While Waller’s decision early last week to not endorse Reeves sent a shockwave through Republican circles and inspired the Monday event, Hosemann took the spotlight later in the week as he began talking more specifically about his policy platform.

Hosemann told Mississippi Today on Wednesday that he supports a version of Medicaid expansion similar to what conservative-controlled Indiana and Arkansas have implemented — an idea that puts him at odds with Reeves, who has drawn a hard line against any such proposal.

During the primary for governor, Waller proposed a similar plan that met with opposition from Reeves, who said of Waller: “I don’t believe you can be for Obamacare expansion and be a conservative.”

Hosemann attended the lunch on Monday and spoke briefly about his candidacy. He did not talk about Medicaid expansion and again stopped short of a direct endorsement of Reeves.

“When Mississippi voters go to the polls two months from now, they’re going to elect every Republican,” Hosemann told the crowd. “We’re more interested in education, infrastructure and healthcare than the Democrats ever were. Y’all vote Republican.”

After the event, Reeves was asked about his criticism of Waller’s position on Medicaid expansion and whether he considered Hosemann a conservative.