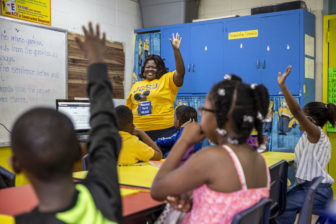 Jefferson County third grade teacher Yashica Suddeth is working with students this summer to help them pass a reading test.

The department released the 2018-19 school year results of the Mississippi Academic Assessment Program (MAAP), which measures student achievement in reading and math for grades 3-8, and English II and Algebra I at the high school level.

“Needless to say we are very excited,” said state Superintendent Carey Wright, who credited Mississippi teachers and principals for the continued success.

“This is now the fourth year in a row that our results have gone up again,” she said.

This year, the number of students who scored a four or five on their math exams improved 3.5 percentage points from the previous school year, with 47.4 percent earning a proficient or advanced. Students improved upon last year’s results in every grade.

While performance on English Language Arts exams improved overall from 39.8 percent to 41.6 percent of students earning proficient or advanced, performance in English II and sixth grade reading took a dip.

Wright noted that the sixth grade group, which saw a 4.4 percentage point drop in ELA this year,  is the same cohort of students that also saw a dip in scores and fourth and fifth grades as well. Last year, English II scores dropped 3.3 percentage points, to 44.5 percent. Scores dropped a bit further for the 2018-19 school year, with 43.8 percent of students earning proficient or advanced.

“I’m not that concerned about a dip of .7 percent,” Wright said.

Wright said a possible reason for the drop in those scores is the fact that this cohort of students have not gone through the same reformed curriculum as today’s elementary schoolers, such as the Literacy Based Promotion Act, which requires all third graders to pass a reading test to determine whether they are ready to move on to the fourth grade

These test scores will play a role in determining school district accountability scores, which combine a number of factors into an A-F rating. The department plans to release those scores in mid-September.