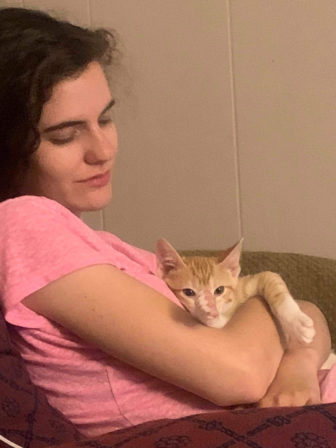 Callie Bryant, left, with a four-month-old foster kitten, which she has cared for since he was a day old, on Feb. 3. in Union County, MS.

At 6:45 every morning, Callie Bryant wakes up to her toes being bitten by the three kittens that sleep in her bedroom. There are five more living upstairs, and another four staying for a visit.

She removes the kittens’ tiny jaws from her feet, gets out of bed, fills 28 bowls, disperses medication and heads to work as a writer from 8 a.m. until 6 p.m.

When she gets home, she lets six dogs out. She feeds her five adult cats – Sasha, Bella, Gracie, Ari and Dora – six foster dogs, 12 foster kittens and two cat moms.

She stays outside with the dogs until 9 p.m. and then plays with the cats and kittens until she falls asleep around midnight.

“We usually have caps on how many [a fosterer] can have,” Bryant told Mississippi Today. “I like to keep it to 2 dogs per foster home and 2 cats/litters, but longtime fosters who are experienced sometimes have almost as many as I do.”

Bryant fosters animals through the Union County Humane Society, where she serves as executive director.

“I still pinch myself that I get to follow my passion,” Bryant said.

She became a foster December 2016, a month after she had turned in her application to manage social media accounts for the Union County Humane Society. Soon, she was on the board.

“Since I stepped up we grew our foster network to nearly 40 homes, expanded our rescue networks above and below the Mason-Dixon Line, and co-hosted our first Microchip Clinic in New Albany with Yellow Rabbit Animal Rescue based in Benton County,” Bryant said.

Each year, Bryant sees about 1,000 animals filter through her program.

“My head is always on fire with so many emergencies but seeing the pictures of animals happy and safe keeps me going,” Bryant said.

Bryant’s emergencies can be anything from a vet forgetting an important health form, to a foster losing an animal, to an animal struggling with a health condition.

“A neighbor emailed me very late at night saying that there’s a tiny starved dog in an overgrown pen; the owner died over a month ago and nobody knew there was a dog,” Bryant said. “This was at midnight. I contacted the lawyer once I got the address. The board lawyer happened to live nearby so she drove in the middle of the night and cut through the pen and dug him out.” 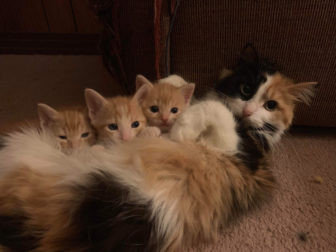 Despite the ongoing work of people like Bryant and her peers, their communities still struggle with stray animals.

“We are overrun by strays,” Bryant said. “In my area it’s common for me or any resident to drive and see a starved stray or a scattered litter of puppies and kittens.”

Bryant says that the stray animals in her community are so numerous that anyone who wants one has probably already chosen one.

“I always joked that local adoptions were hard because all the good adopters can just put out a food bowl and get a pet right away,” Bryant said. “For example, I had a doctor interested in adopting one of our kittens, then he found 3 kittens in a parking lot and took them home. I’m not disappointed because that’s three less kittens we have to worry about out there, and he made sure they all got necessary medical care. That same week, I had another adopter interested and then she found 2 kittens in her backyard and kept them.”

In order to find homes for these animals, rescuers like Bryant work with organizations in the northeast to ship future pets out for adoption.

“It’s much easier to send them off to states that don’t have stray animals like we do,” Bryant said.

Although some states have regulations which require some pets be sterilized, Mississippi is not among them.

“I would submit that spay and neuter has got to be in the minds and on the tongues of our population until our legislators understand that spay and neuter is going to be the only answer for most of these problems,” Doll Stanley, director of the Justice for Animals Campaign told Mississippi Today.

Because spaying and neutering can be costly, there are programs throughout the state and nation working to help pet owners. For example, Mississippi Spay and Neuter tries to provide affordable animal sterilization services throughout the state, using their clinic in Jackson and partner facilities to help, and the American Society for the Prevention of Cruelty to Animals (ASPCA) provides an interactive map for people to locate low-cost spay/neuter programs.

“The good news is that people are finding out about the program, but the bad news is that so many people have found out about the program that it drained all of our funding about halfway through the year,” Mississippi Spay and Neuter Communications Manager Shelby Parsons told Mississippi Today, explaining the demand for affordable spay and neuter services in the state.

Programs like these help families to seek out health care for their animals that they might not have been able to otherwise.

“Many rescuers will say people don’t care and it’s true that many won’t, but I’ve talked to a lot of owners who truly love their animals — they’re just too poor,” Bryant said. “I also noticed poor people tend to have a lot of animals. I think they see themselves in their plight.”

People who want to help local animal shelters can foster, volunteer or donate, but sterilizing pets is the most effective way to reduce stray pet populations, rescuers say.

The Animal Legal Defense Fund ranks Mississippi as the second worst state for animals in the nation, behind only Kentucky which prohibits veterinarians from reporting animal abuse.

Although animal rights activists have been pushing to update animal welfare laws in the state, Bryant doesn’t think that the existing ones are being enforced.

“Animal welfare is very low on the list,” Bryant said. “It’s a symptom of a bigger problem the state is going through …”

Foster programs like the one at Union County Humane Society depend on volunteers to house and care for animals between rescue and adoption. A recent study conducted by Maddy’s Fund showed that even short-term breaks like staying with foster parents on weekends is better for pets. Also, animals in foster homes are less likely to contract deadly diseases – like parvovirus – Bryant said.

Bryant helped Meagan Cunnigham establish an animal rescue in Tippah County last year. The organization is still in the process of being certified as a nonprofit.

Although Cunningham runs her own rescue, she still admires Bryant’s work across the county line.

“Sometimes I don’t see how she does it,” Cunningham told Mississippi Today.

Grace Marion is an editorial intern for Mississippi Today studying journalism and Spanish at the University of Mississippi. Grace has had bylines in PBS Newshour, the Playwickian, the Bucks County Courier Times, Howler literary magazine, Kaaterskills Basin Literary Magazine, the Write Launch, the Daily Mississippian and Women’s E-News. She was the 2019 recipient of the Hugh M. Hefner Foundation First Amendment Defense Award and a 2018 recipient of the Stamps Foundation scholarship at the University of Mississippi.

A passion for animal welfare: Fostering tough but rewarding work in a community ‘overrun by strays’