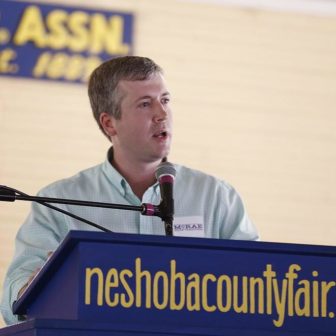 NESHOBA COUNTY FAIR — David McRae and state Sen. Eugene “Buck” Clarke, both vying for the Republican nomination for state  treasurer, avoided attacking one another in their Thursday afternoon Neshoba County Fair speeches and instead focused on why they think they’re the best candidate. For McRae, it’s his alignment with the president, and for Clarke it’s experience.

He then called out a general misunderstanding of the treasurer as one who “guards the piggy bank” and said in office he would focus on growing the state’s revenues.

McRae also wove his four-point plan for the office into his speech:

“I’m going to make sure the deals we are giving to companies are going to help Mississippi today, tomorrow and they’re not just made for the optics of the moment,” McRae said. 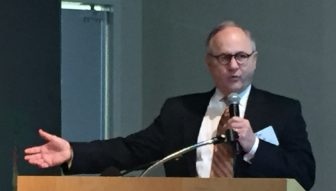 Near the end of his speech McRae thanked his opponent, Clarke, for running a clean race and called it refreshing.

Clarke, chairman of the Senate Appropriations Committee, focused his speech on his 16 years in the state Senate.

“We got a saying in the Delta, ‘I was warm when I got here but I’m hot now,’” Clarke said.

Clarke went on to tout his accomplishments from his eight years as chair of the Appropriations Committee. He recalled a time when there was nearly $200 million in what he called “one-time money” in the state budget. This was recurring spending that the Legislature did not have funding for beyond that year.

Clarke said that one-time money no longer exists in the budget, and that and the $500 million in the state’s rainy day fund will keep interest rate’s low.

Clarke also discussed the importance of the fiscal briefing the treasurer and state auditor present to the Legislature at the beginning of each legislative session. He said both knowledge of the data and the confidence to provide useful information is essential to delivering that briefing. 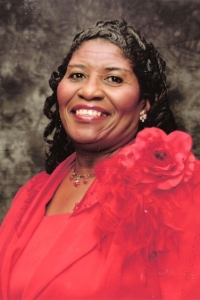 “You know all the money in the world can’t by experience,” Clarke said, an indirect jab at McRae, who has donated $1 million to his own campaign.

The winner of the Republican primary on Aug. 6 will face off against Democrat Addie Lee Green, a former alderwoman in Bolton, on Nov 5.

Green made a surprise appearance at the fair on Thursday. Donning an American flag blouse and sunhat, she made the last speech of the day.

To demonstrate that she was ready to handle the state’s money, Green brought out an actual piggy bank and dramatically placed two dollars into it.

She also encouraged people to vote, jokingly saying that if they couldn’t walk to the polls they should “wobble” or “slide” to the polls, demonstrating the dance steps on stage.

Speaking of taking care of public funds, Green said “… I want to make sure it gets to the people, not in one or two hands of government.”

A native of Vicksburg, Will was an editorial intern for Mississippi Today. During his internship, he was a senior studying print journalism and philosophy at the University of Mississippi.

by Will Stribling, Mississippi Today
August 1, 2019