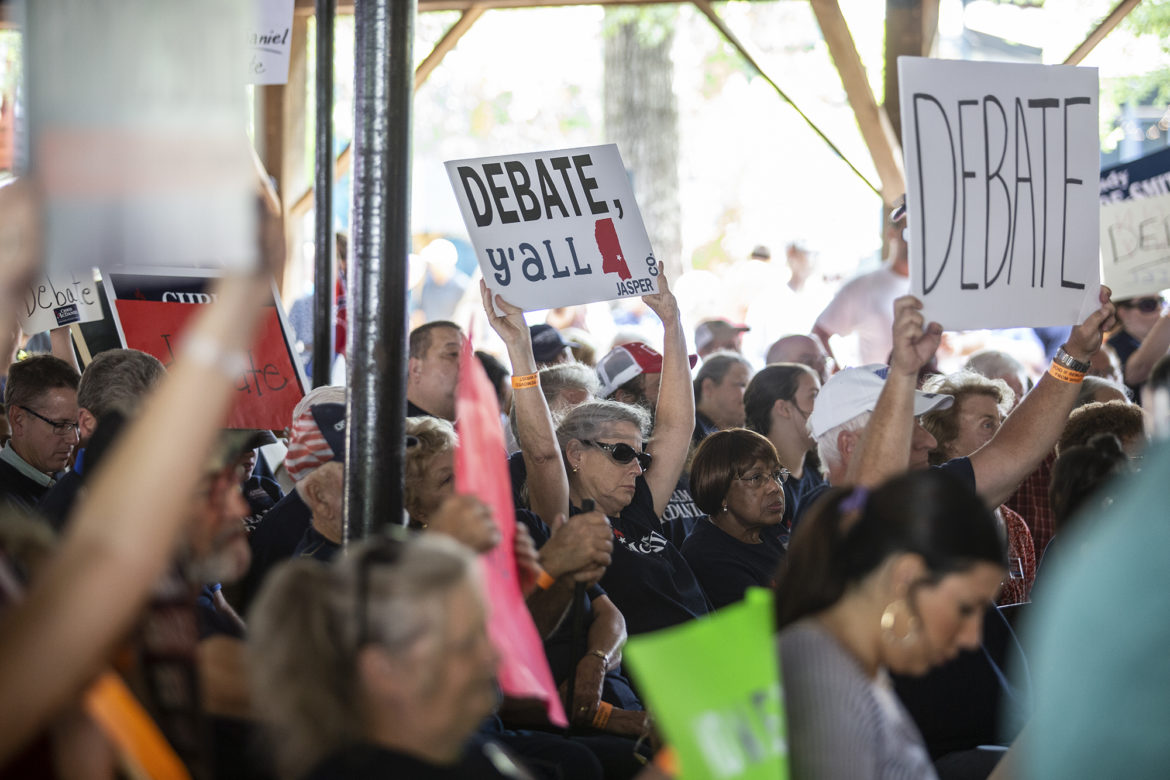 Audience members hold signs as they listen to speeches during the Neshoba County Fair in Philadelphia, Miss. Thursday, August 2, 2018.

As the three Republican candidates for governor sharpen their speeches for the all-important Neshoba County Fair, the first public poll of the Republican primary shows no candidate has yet earned the more than 50 percent necessary to avoid a runoff if the election were held today.

The poll shows that 15 percent of respondents remain undecided, a pivotal figure as just one key moment in the candidates’ campaigns remain: the Neshoba County Fair, Mississippi’s annual political forum that has historically proven decisive to gubernatorial campaigns.

If no candidate earns more than 50 percent of the vote Aug. 6, the top two vote-getters will face each other in a runoff Aug. 27. The winner of the runoff election will face the Democratic nominee in November.

Two of the three Republican candidates for governor personally know the history and significance of the Neshoba County Fair, covered closely by most every news outlet in the state and scheduled as the last big moment for statewide candidates to differentiate between their competitors.

Reeves is very familiar with the Fair podium, having spoken there each summer since 2003 when he was first elected to statewide office.

The past three years, Reeves used his 10 minutes under the pavilion at Founder’s Square to slam Attorney General Jim Hood, the perceived front-runner in the Democratic primary for governor.

Reeves has largely avoided mention of his primary opponents Waller and Foster, but in recent weeks has begun publicly discussing the possibility of a runoff.

Waller is also not new to the Neshoba podium. During his time as a justice on the Mississippi Supreme Court, Waller has given four speeches under the pavilion. Waller’s message to-date has been one of pragmatic solutions to the state’s problems in infrastructure, public education and health care.

Foster, a first term state representative, will be giving his first speech at the Neshoba County Fair. He, like Waller, has offered solutions to the big three policy issues, but has in recent weeks boosted a message of values.

The Neshoba County Fair has provided the backdrop for some of the most memorable and fiery political moments in the state’s gubernatorial election history.

In 1991, at the last closely contested Republican primary for governor, a political outsider named Kirk Fordice pounded his fists on the podium as he decried the state’s budget holes and pitched various tax reform measures to fill them.

Following his speech, several newspaper reporters wrote favorably of the speech and that Fordice was “gaining momentum” on then-state Auditor Pete Johnson, the perceived front-runner. A few days later, Fordice earned enough votes to force a runoff with Johnson. Fordice defeated Johnson in the runoff and was elected governor later that year.

Four years later, Fordice, the incumbent governor, squared off with Democratic Secretary of State Dick Molpus in what is exclusively referred to in Mississippi politics as “The Great Debate.” The two slammed each other on every policy point introduced by the moderator, stirring the state’s most seasoned political columnists into unprecedented states of prose that drew many readers and widespread acclaim. Die-hard politicos say Fordice’s performance in that debate won him reelection.

In 1971, Jackson attorney Bill Waller Sr. used his time at the podium to boost the term “Capitol Street Gang,” wealthy Jackson businessmen who he said backed gubernatorial front-runner and then-Lt. Gov. Charlie Sullivan. Waller’s speech earned praise in the press, and he later upset Sullivan in the Democratic primary and was later elected to the Governor’s Mansion.