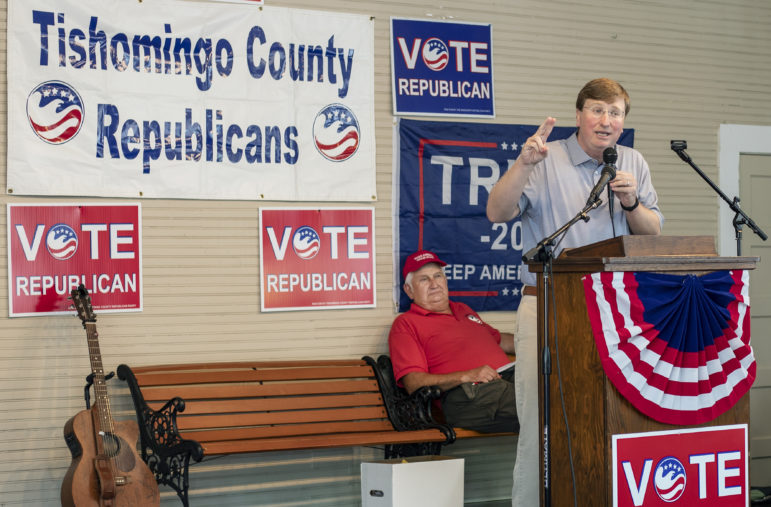 Lt. Gov. Tate Reeves said Tuesday that “our economy is growing faster today than any time in our state’s history.” It’s a statement repeated on the campaign trail, and while some stats back the claim, other statistics paint a less rosy picture.

“Our economy is growing faster today than any time in our state’s history,” Reeves proclaimed Tuesday during the debate that included all three Republican candidates for governor.

Reeves has made similar pronouncements in the past. It is a key to his campaign.

During Reeves’ tenure as lieutenant governor, starting in 2012, the gross domestic product, a measure of the state’s wealth and viewed as a key economic indicator, has grown 2.2 percent, 0.6 percent, -1 percent, 0.1 percent, 2 percent, 0.3 percent, and 1 percent, according to figures compiled by the University Research Center. By contrast, from 1991 to 1999, as the casino industry started in Mississippi, the annual growth in GDP was never less than 2.2 percent and was as high as 6.8 percent. The average growth for the 1991-to-1999 time frame was 4 percent. There also was strong GDP growth during stints in the 2000s.

It is true, as Reeves pointed out at Tuesday’s debate, that the state in recent times has had record low levels of unemployment – 4.3 percent in April 2018. But that rate has ticked up in recent months – up to 6 percent in June and is one of the highest levels in the nation.

Compared to the nation as a whole, jobs growth in the state has been slow. The number of people with jobs in Mississippi did not surpass the pre-recession 2008 level for a decade until early in 2018 when employment hit 1,164.2 million, according to the federal Bureau of Labor Statistics. As of December 2018, jobs growth since the 2008-09 recession was 1.3 percent in Mississippi compared to 8.3 percent nationally, according to University Research Center data.

There are all sorts of statistics that can be cited. Mississippi, for instance, continues to have one of the lowest work force participation rates in the country. In other words a lot of people are not working.

Perhaps, the statistic that most makes Reeves’ case that the economy is growing is the fact that state revenue collections for the July 2018 to June 2019 fiscal year grew 4.9 percent or $277 million year over year. That was the highest percentage of growth since fiscal year 2014 when the revenue grew by 5.1 percent. But between 2014 and the just finished 2019 fiscal year, there were multiple years of anemic growth. And it should be pointed out that in the 1990s there were multiple years where revenue grew by more than 10 percent.

Still, Reeves cites the recent revenue growth as an example of a strong economy since sales tax revenue and personal income tax revenue make up the bulk, though, not all of state revenues. Growth in those two revenue sectors is evidence the economy is growing, Reeves and many economist say. Sales tax growth was 2.65 percent for the year and income tax growth was 3.9 percent.

The Tuesday debate highlighted what has developed as the defining issue of this year’s gubernatorial election – how well is the state actually doing economically.

Reeves, as the lieutenant governor and key policy maker, wants people to be convinced his policies have helped create a strong economy. In this regard he wants to be linked to outgoing Republican Gov. Phil Bryant, who has endorsed him. Bryant has a 70 percent approval rating according to a recent NBC/Survey Monkey poll that also found that most Mississippians think the state economy is good. Both of those statistics have to be good news to Reeves. After all, in politics perception often trumps reality.

But at the Tuesday debate his opponents tried to convince voters that the economy is not as strong as Reeves claims. State Rep. Robert Foster of DeSoto County argued the economy should be growing at a much faster pace.

“I am not satisfied with the status quo…I believe Mississippi deserves better,” former Supreme Court Chief Justice Bill Waller Jr. said during the Tuesday debate. He pointed out that since 2009 Mississippi’s gross domestic product has grown by 2 percent, compared to 22 percent growth for the nation. Waller gets those figures from an article written by state Economist Darrin Webb.

If Reeves successfully makes the strong economy argument against Foster and Waller and wins the Aug. 6 primary, he will have an opportunity to make the argument again in the November general election against a Democrat – most likely Attorney General Jim Hood.

Not all statistics back up Reeves’ bold claim about state economy