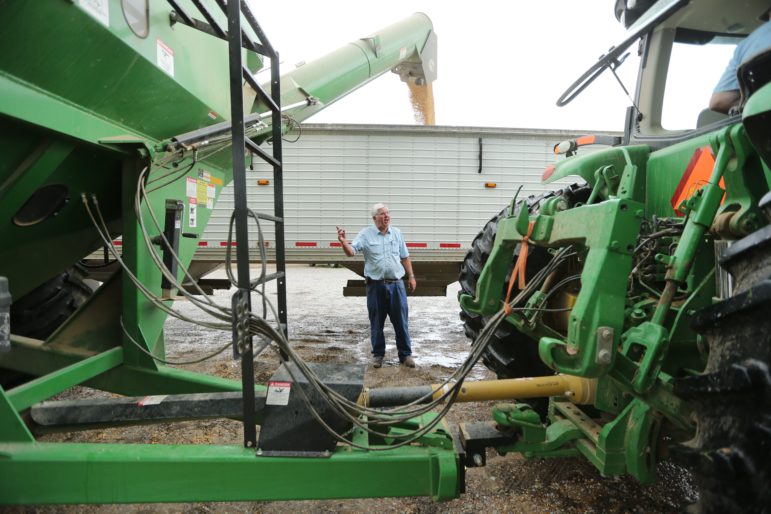 Tony Campbell of Baldwyn, pictured in this file photo, drives a tractor-trailer loaded with soybeans over to a processor in Alabama on most days. Brothers Roger, Tony and Mike Campbell farm in three northeast Mississippi counties.

Roger Campbell, age 67, who farms about 2,000 acres with his two brothers in Prentiss, Lee and Itawamba counties in northeast Mississippi, says he farms because “it is what I know.”

For 51 springs, he has put seeds in the ground, just as his father did.

But the combination of uncertainty caused by tariffs imposed on American farmers by China and the unusually wet spring is testing the nerve of most Mississippi farmers, including Campbell.

“I enjoy farming,” said Campbell, who farms with his brothers, Tony and Mike. “Of course, I don’t want to lose money. You can’t long in this business. The equipment is so expensive.”

Josh Miller of Yazoo County, who normally farms about 1,850 acres in Sharkey and Yazoo counties, will not plant any crops this year. His land is essentially underwater. Miller is not alone. It has been estimated that about 225,000 acres of agriculture land across the south Mississippi Delta are underwater.

Miller, age 46, said perhaps he could plant soybeans in late June or July. But planting that late, most likely would result in a poor crop that would not yield much in profits. The Chinese tariffs would further cut into those profits.

“We’re getting a double hit,” said Miller, whose family has been farming since the 1800s, minus one uncle who went to work for NASA.

For the second consecutive planting season, farmers, including those in Mississippi, are facing the prospect of China placing tariffs on their product. Soybeans, the largest row crop in the state, is being hit particularly hard by the Chinese tariffs imposed in retaliation for tariffs placed on Chinese products by the administration of President Donald Trump.

“What we have right now is the farmers are being hit from both sides – with the weather and the tariffs,” said Keith Coble, director of the Agriculture Economic Department at Mississippi State University.

Last year the Trump administration made up to $12 billion available through the Market Facilitation Program to provide financial aid to farmers impacted by the Chinese tariffs. Soybean farmers received $1.65 per bushel for the soybeans they sold. As of earlier this month, according to the United States Department of Agriculture, $8.54 billion had been paid out to farmers. The top five states receiving the subsidies have been Illinois, Iowa, Kansas, Nebraska and Indiana. A spokesperson for the USDA would not break out the amount received by farmers in each state. But the top five crops receiving the payments were soybeans, corn, wheat, cotton and sorghum.

Farmer and President of North Mississippi Grain Company Jerry Slocum checks business emails on his phone while at his company in Coldwater, Miss. Wednesday, June 20, 2018.

When the program was put in place last year to help farmers offset their losses, soybean farmer Jerry Slocum of Coldwater, said farmers were told it would be a one year program. But after trade negotiations between the United States and China broke off last month, the Trump administration announced it would continue the program. The president recently announced $16 billion would be available for the upcoming farming year.

Slocum said the program was a big help last year. “It helped you pay the bills but not enough to make a living,” said Slocum, age 65, who farms and also owns North Mississippi Grain Company that purchases crops from other area farmers.

Said Campbell, “Farmers are pretty independent. They don’t like to say they are getting a handout.”

But Slocum said farmers are having to bear the brunt of the impact of the trade war. Still, he said he supports the effort of the Trump administration to garner better trade deals.

“We want fair trade? You better believe it,” Slocum said. “But it is time to get it done.”

Said Campbell, “It has been difficult, but I can understand. I think all the farmers I have talked to support Mr. Trump in trying to get this worked out. All are in support, but at the same time we have to make a living.”

The state’s three Republican candidates running for governor in this year’s elections all stopped short of blaming the Republican president for the trade war.

“The president is working to get a fair deal with China,” said Lt. Gov. Tate Reeves, who is the favorite on the Republican side for governor. “I think he will be successful in doing so. The American people deserve a fair deal with China and right now everybody knows we are not getting one.”

Former state Supreme Court Chief Justice Bill Waller Jr. said it is vital to agriculture, which is one of the state’s top industries, to resolve the issue.

Rep. Robert Foster of DeSoto, who is running for governor in the Republican primary, said he supported the Trump effort to combat Chinese trade policies, but conceded it was causing “short-term pain for long-term gains.”

Others question whether the pain is worth the effort.

Democratic U.S. Rep. Bennie Thompson of Bolton who represents most of the farm rich Mississippi Delta, said, “The president’s tariffs are adversely impacting agriculture. Furthermore, the agricultural economy will continue to suffer if President Trump maintains his tariffs on Chinese goods.”

According to the Mississippi Farm Bureau, soybeans, before the trade war began last year, was the state’s and nation’s top agricultural export to China. But since the trade war, soybean exports to China “have plummeted” 90 percent.

In Mississippi, about 80 percent of the more than 115 million bushels of soybeans produced were exported to China prior to the trade war.

Cotton also was a big export to China. 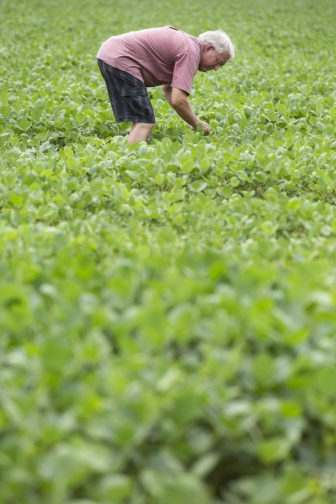 Farmer and President of North Mississippi Grain Company Jerry Slocum takes a photo of a few damages crops before sending the images to a plant pathologist at Mississippi State Wednesday, June 20, 2018 in Coldwater, Miss.

Slocum said American farmers have found other markets, but not enough to offset the loss of the Chinese, who are now garnering their soybeans primarily from South America.

“Two of every three beans go to China,” Slocum said.

While the federal subsidies are helping to offset the loss of the Chinese market, Slocum worries that the U.S. farmer might have a difficult time re-entering China after the trade war ends. He fears the Chinese might continue to purchase South American beans.

The various trade wars the president is engaging in impacts a number of products and people. For instance, Americans, it is estimated, are having to pay an additional $100 for washing machines because of tariffs, according to research conducted by researchers at the University of Chicago and the Federal Reserve Board.

Of the tariffs, Corey Miller at economic analyst at the University Research Center, said, “You might note that by essentially eliminating the largest export market for U.S. soybeans, the tariffs have pushed down soybean prices, which hurts Mississippi producers and our ag sector, as soybeans are our largest (row) crop. The steel and aluminum tariffs Trump imposed last year I believe have hit every country the U.S. imports steel and aluminum from, including allies like Canada, Mexico, and the EU. Each of those countries has retaliated with tariffs on billions of dollars of specific goods they import from the U.S.

“Another point is these tariffs and discussion of possible tariffs generally create an environment of uncertainty that makes it more difficult for producers of goods to make long-term commitments and decisions.”

“It’s a balancing act,” said Michael Aguzzi, a Cleveland farmer. “It’s forcing us to make decisions on bean storage and if we’re going to ride this roller coaster out.”